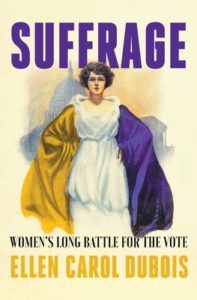 Book Review, How Long Did We Wait?

What if, in the years after the Civil War, the United States Congress had heeded the advice of Elizabeth Cady Stanton and Susan B. Anthony and guaranteed universal suffrage as a basic condition of citizenship—for men and women—black and white? Had the democratic franchise been vastly expanded and administered by the federal government, might modern U.S. history have taken a different turn? Would the rights of all citizens have been safer, and the integrity of elections more secure? Would communities in states across the country be better protected against voter suppression today?

In her compelling new history of the U.S. women’s suffrage movement, Suffrage: Women’s Long Battle for the Vote, Ellen Carol DuBois asks us to ponder these provocative questions. Yet she is clear-sighted about how intractable the argument proved to be in its time, and how remote the prospect of women’s suffrage really was in a society governed by entrenched patriarchy and states’ rights.

America’s pioneers of racial and gender justice shared many common values and forged deep bonds during the 1850s. Stanton and Anthony participated as anti-slavery organizers, while Frederick Douglass, Sojourner Truth, Lucretia Mott and Lucy Stone endured criticism for supporting the campaign for women’s rights that began at Seneca Falls—not just the right to vote, but also to own property and accumulate wealth, to access higher education and profitable employment, and to marry and divorce freely.

Such an expansive human rights vision, however, found no place in the aftermath of a bloody war to defend the union and eradicate slavery.