Soujourner Truth's Ain't I a Woman Speech and Intersectional Feminism

Constance Grady, Vox, Celebrating Sojourner Truth: "Ain't I am Woman" and It's Legacy

Google is kicking off Black History Month this year by celebrating the legacy of Sojourner Truth, the subject of today’s Google Doodle. Which means that it’s time to reread one of the great works of American rhetoric: Truth’s “Ain’t I a Woman” speech.

Sojourner Truth was born into slavery at the end of the 18th century, but she escaped — carrying her infant daughter with her — in 1826. (“I did not run off, for I thought that wicked, but I walked off, believing that to be all right,” she would later say.) When the son she left behind was sold illegally, she successfully sued for his freedom as well. Naming herself “Sojourner Truth,” she converted to Methodism and began campaigning for women’s rights and the abolition of slavery.

She improvised her “Ain’t I a Woman” speech in 1851 at the Ohio Women’s Rights Convention in Akron. The exact wording of the speech has been contested. In contemporary transcriptions, the famous question “ain’t I a woman?” doesn’t appear anywhere, and some historians have argued that native New Yorker Truth is unlikely to have spoken in the Southern-inflected English that tinges the most widely reproduced version of the speech.

But regardless of Truth’s precise wording, the message at the core of “Ain’t I a Woman” rings powerfully true 168 years later: that women can change the world, and that Truth’s blackness did not make her not a woman. That’s the kind of intersectionality that Truth was immensely skilled at navigating, despite the enormous pressure on women of color at the time to choose between the women’s movement and the abolitionist movement. Truth never chose. As she pointed out in her speech, she shouldn’t have to

Historian Nell Irvin Painter challenges the traditional understanding of this speech in her book, Sojourner Truth: A Life, A Symbol suggesting that a local female activist and reporter, exaggerated or crafted the speech based only loosely on Truth's short presentation to the suffrage gathering in Akron.

bell hooks took the title of Truth's speech for her seminal work, Ain't I a Woman: Black Women and Feminism, critiquing both exclusion of black women from both the civil rights and feminist movements.

My home city of Akron, Ohio, was the location of Truth's famous speech.  Currently a mural in Truth's memory resides on the side of a prominent downtown building. 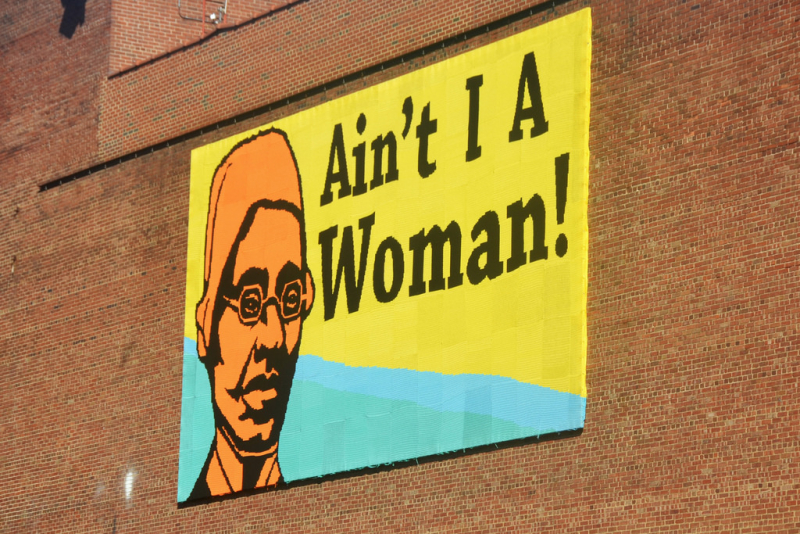