WSJ, The 92-Year-Old Woman Who is Still Shaking up Wall Street: Law Professor Tamar Frankel is Considered the Intellectual Godmother of the Fiduciary Rule

Ms. Frankel, a law professor at Boston University, is the intellectual godmother of the fiduciary rule, a regulation from the U.S. Department of Labor requiring anyone being paid to provide investment advice on a retirement account to act in the best interest of the client. At the age of 92, Ms. Frankel still commutes to work five days a week, teaches two courses—and is unfazed that the Labor Department announced on Nov. 27 that it would delay implementing key parts of the fiduciary rule until July 2019.

After all, Ms. Frankel has been advocating that brokers should put their clients first for more than 40 years. What’s another 18 months?

Born in what was then Palestine in 1925, Ms. Frankel joined the Haganah, the paramilitary movement for Israeli independence, at age 14. Her father was the first president of Israel’s bar association, and she apprenticed in his practice. In 1949, she became the first general counsel of the Israeli Air Force. Two years later, when she was 26, her father died, and she took over his law practice.

In 1963, Ms. Frankel came to study at Harvard Law School. She wrote her doctoral dissertation on variable annuities, those mashups of mutual funds and insurance.

“That was perfect, because I knew very little about mutual funds and very little about insurance,” she says. “There are two ways you can react to not knowing: one is to feel afraid of your ignorance, the other is to be consumed by the desire to understand. I felt almost drunk with how much I could learn.”

In 1968, as she was still studying to complete her dissertation, Ms. Frankel joined Boston University. The field was so male-dominated that, when she arrived as the law school’s first female professor, BU relegated her office to the basement of the library.

“I didn’t have to put the books back on the shelf!” she laughs. “The craving for being part of the group, being accepted, that wasn’t my priority.”

After she turns 93 next July 4, Ms. Frankel says, she will stop teaching—although she will continue to research and write.

What accounts for her longevity? “Caring less and less about what other people think,” she says, “and more and more about questions you don’t have answers to.” 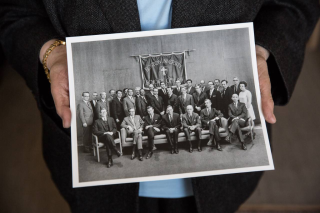 The BU Law Faculty in 1972 when Prof. Frankel was the only woman professor.