I have been blogging about my new book, Elizabeth Cady Stanton & the Feminist Foundations of Family Law (NYU Press 2016).  See Introduction, Chapter 1 (Marital Property), Chapter 2 (Marriage reform), and Chapter 3 (Divorce reform). Today I want to talk a bit about Chapter 4 “The Incidental Relation of Mother.”

Stanton’s philosophical point in identifying motherhood as "incidental" was that women’s role of mother did not define her legally or socially, but rather was one incident of her life. In a time when the cult of motherhood and the idealization of the domestic sphere of the home defined women, and denied them all public and legal rights as married women, Stanton clashed with the accepted status quo and challenged the notion that motherhood was the defining attribute of women’s citizenship.  But one of the hardest audiences to convince of this was women themselves. Still she persisted in trying to shift the culture, as he wrote to the Seventh National Woman’s Rights Convention in 1856: “The woman is greater than the wife or the mother; and in consenting to take upon herself these relations, she should never sacrifice one iota of her individuality to any senseless conventionalisms.” Stanton herself had seven children, and presented a credible authority of one who could challenge the legal restriction of motherhood, even as she appreciated and enjoyed the role.

Both chapter 4 and chapter 5 of the book further develop the specific concrete rights and actions that Stanton then demanded under her philosophy of incidental motherhood. Chapter 4 addresses Stanton’s views of reproductive rights, most namely the right to “voluntary motherhood” and control of sexual relations and procreation.

This chapter to me was one of the most important chapters as I worked to set the record straight. For today, Stanton has been adopted as a poster-child of the prolife movement. Quite literally, her image and words are used on posters, flyers, and commemorative coffee mugs put out by the prolife organization, Feminists for Life. She is cited, repeatedly, in US Supreme Court amicus briefs as evidence of a feminist history against abortion. However, as I detail in the book and here, Stanton was not a prolife advocate. Not at all. In fact, I found only one reference in all of the thousands of historical documents I reviewed in which Stanton even mentioned the word abortion. In this one line, she lists it as one of many social problems identified by reformers, but which she traces back to the core problem of women’s inequality and lack of control in marriage and social and sexual relations. 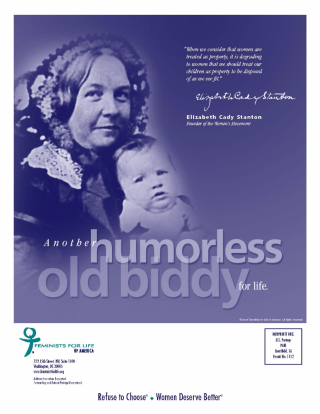 What Stanton did talk about was voluntary motherhood.  Voluntary motherhood was the ideology of both feminists and conservative women reformers which advocated the right of women to control when they engaged in sexual relations with their husbands.  It reject the marital sexual privilege of the husband and the presumed right to unlimited sexual access. Instead, it placed the sole control of sexual relations with the wife, as it was the wife that bore the physical, emotional, and social consequences of pregnancy. It was a theory of abstinence that placed the right of reproductive control within the singular hands of the woman.

Stanton also wrote a great deal about infanticide, rather than abortion.  Infanticide was the more shocking claim as it alleged a woman had killed her infant after its natural birth. Stanton defended women accused of infanticide and demand mercy rather than the death penalty. She trumped the defense of Hester Vaughn, an eighteen-year-old English working-class girl convicted of infanticide when her baby was found dead next to her where she had given birth alone, starving, in a freezing cold tenement.  Stanton used infanticide to illustrate the injustice of a legal process that included women as jurors, judges, lawyers, lawmakers and even witnesses. For in heavy-handed prosecution of this crime, without prosecution of the male partner or attacker who caused the crime and without mercy from women who understood the situations of such a pregnancy, the law was patently unjust.