Chap. 3 Stanton & Family Law: "Divorce is Not the Foe of Marriage"

I have been blogging, chapter by chapter, about my new book, Elizabeth Cady Stanton & the Feminist Foundations of Family Law (NYU Press 2016). Chapter 1 was "What Do You Women Want?" on marital property reform. Chapter 2 was "The Pivot of the Marriage Relation" on marriage equality and restructuring marriage. Today is Chapter 3 on divorce reform and domestic violence.

From the Introduction to the chapter:

The “marriage question,” as it was called in the nineteenth century, was less about marriage and all about divorce. America inherited the divorceless legal tradition of England derived from canon law, prohibiting divorce but allowing separation and annulment. A few colonies and states experimented with divorce, slowly expanding the fault grounds for divorce by the middle of the nineteenth century, with a few states adopting broad grounds for any misconduct or cause. Legislatures were guided by legal concepts of individualism and contract theory, and influenced by temperance arguments for the protection of women. As the country grew through expansion, immigration, and industrialization, divorce increased. Numbers went from 9,937 in 1867, the first year a national census on divorce was taken, to 33,461 in 1890 and to 167,105 by 1920. The moral outcry was loud, as clergy and moral reformers predicted the deterioration of the family and the downfall of society.

Stanton was at the forefront of the very public debate on divorce. She viewed divorce as an important issue of women’s rights because it freed women from marriage, where their legal status was denied and their personal freedoms curtailed. Viewing marriage as a trap, she was supportive of any legal means for women to escape, including no-fault or “easy divorce.”Taking this a step further, Stanton argued that women had a duty, an obligation to divorce, in cases of domestic violence and intemperance, to protect themselves and their children.

Divorce had been seen historically and biblically as a way for men to “put away their wives,” but Stanton reframed it as a legal remedy for women. She “single-handedly shifted the age-old idea of divorce as a male prerogative to a right demanded by women on humanitarian grounds.” Women needed divorce, Stanton argued, to escape domestic violence, abuse, poverty, and simple unhappiness. “Liberal divorce laws for oppressed wives,” Stanton proclaimed, “are what Canada was for Southern slaves.” The majority of divorces, over two-thirds, were filed by women—a key fact for Stanton proving the importance of this issue for women and the propriety of including it within the women’s rights platform. Divorce was not a morality crisis, but simply a consequence of women’s assertion of rights. “This is woman’s transition period, from slavery to freedom, and all the social upheavings, before which the wisest and bravest stand appalled, are but necessary incidents in her progress to equality.” Divorce provided the self-help remedy that let women enforce their own rights and expectations of marriage, with the secondary effect of transforming marriage into a more egalitarian structure.

Stanton’s tenaciousness on divorce, however, alienated colleagues and divided the women’s rights movement. Her vocal support of divorce outraged reformers, increased opposition to women’s rights, and contributed to the split in the organized women’s movement. Stanton remained undeterred, convinced of the necessity of divorce to women’s full equality. As the eighty-year-old Stanton recalled, “[S]o bitter was the opposition to divorce for any cause that but few dared to take part in the discussion.” But, she said, “I was always courageous in saying what I saw to be true, for the simple reason that I never dreamed of opposition. What seemed to me to be right I thought must be equally plain to all other rational beings.”

Stanton initially presented divorce as woman’s duty to free herself and her children from an alcoholic husband and domestic violence.

She first wrote of her support for divorce in 1850 in a short article aptly titled “Divorce,” published under the pseudonym “Sun Flower” in the women’s temperance newspaper, the Lily. At this time, a New York legislative committee had proposed a bill to expand divorce beyond the cause of adultery to include desertion, imprisonment, drunkenness, and insanity. Stanton brought this to her readers’ attention and gave it her vote. “I see there is a bill before the Legislature providing some new doors, through which unhappy prisoners may escape from the bonds of an ill assorted marriage. . . . I hope that bill may pass.” She strongly endorsed divorce in the context of intemperance and abuse. “The Legislature, so far from placing any barrier in the way of a woman wishing to leave a drunken husband, ought to pass laws, compelling her to do so.” Divorce, she suggested, would be woman’s duty in such circumstances. Going further, Stanton proposed a broader right to no-fault divorce. “If, as at present, all can freely and thoughtlessly enter into the married state, they should be allowed to come as freely and thoughtfully out again.”

She later then wove divorce reform of no-fault divorce and equal fault divorce into her speeches to the New York legislature and to the public, “speaking wisdom to the popular ear.” But the notorious McFarland v. Richardson trial gave her a national stage on which to play out her critique of marriage and solution of divorce.  McFarland, with premeditation, shot his ex-wife’s lover, a famous journalist. The jury acquitted on grounds that McFarland was entitled to defend his property of his home and his wife. Even though his wife had divorced him (out-of-state). And even though he had committed domestic violence against her. 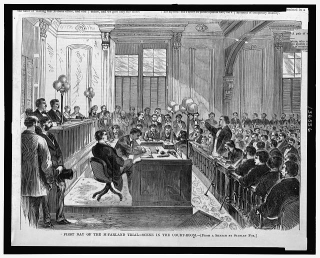 Stanton then repeated her shocking demand for free and easy divorce a year later in the context of the Laura Fair trial in San Francisco. Fair was sentenced to death for shooting her longtime lover when he returned to his wife. Stanton argued the disparate inequalities in the law that would starkly excuse the murder by a husband, but condemn the same murder by a woman. 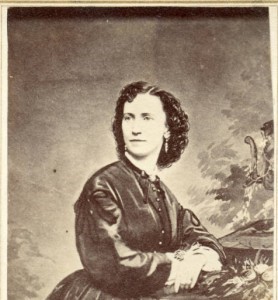