United States v. Susan B. Anthony was a criminal trial in the federal courts. In the federal election in November 1872, Anthony, the best-known advocate of woman suffrage, registered to vote and then voted. The government charged her with the crime of voting without “the legal right to vote in said election district”—she, in the words of the indictment, “being then and there a person of the female sex.” Her trial revealed the complexity of federalism in the post-Civil War years. She was convicted in federal court under federal law for violating state law about who was eligible to vote. New York state law prohibited women from voting, and a recent federal law provided for the criminal prosecution of anyone who voted in congressional elections “without having a lawful right to vote.”

Primarily a case about woman suffrage and sexual discrimination, United States v. Susan B. Anthony is also a case about Reconstruction and the balance of federal and state authority. Prior to the Civil War, the demand for woman suffrage was directed to state governments, each of which set the qualifications of voters in the respective states. Reconstruction redirected the demand. The federal government assumed some authority over the voting qualifications enacted by the states, and woman suffragists saw in that change an opportunity to extend voting rights not only to black men but also to black and white women. They called for universal suffrage.

Anthony and the members of the National Woman Suffrage Association, after failing to gain explicit reference to the voting rights of women in the Fourteenth and Fifteenth Amendments, set about testing the meaning of what those amendments did say and how the amendments might have changed the rights of women. Anthony was among a group of women in the country trying to establish, through test cases in the federal courts, that the amendments had so redefined citizenship and rights that women were protected by the federal government in their right to vote. 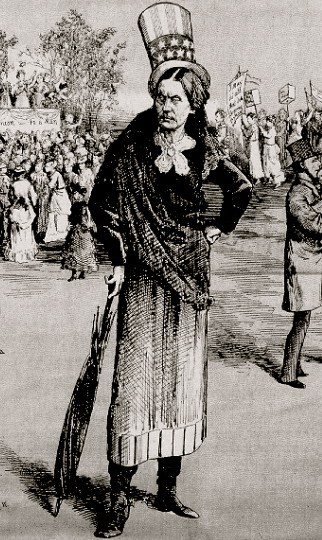 Remarks by Susan B. Anthony in the Circuit Court of the Northern District of New York,  June 19, 1873

As a matter of outward form the defendant was asked if she had anything to say why the sentence of the court should not be pronounced upon her.

"Yes, your honor," replied Miss Anthony, "I have many things to say. My every right, constitutional, civil, political and judicial has been tramped upon. I have not only had no jury of my peers, but I have had no jury at all."

Court—"Sit down Miss Anthony. I cannot allow you to argue the question."

Miss Anthony—"I shall not sit down. I will not lose my only chance to speak."

Court—"You have been tried, Miss Anthony, by the forms of law, and my decision has been rendered by law."

Miss Anthony—"Yes, but laws made by men, under a government of men, interpreted by men and for the benefit of men. The only chance women have for justice in this country is to violate the law, as I have done, and as I shall continue to do," and she struck her hand heavily on the table in emphasis of what she said. "Does your honor suppose that we obeyed the infamous fugitive slave law which forbade to give a cup of cold water to a slave fleeing from his master? I tell you we did not obey it; we fed him and clothed him, and sent him on his way to Canada. So shall we trample all unjust laws under foot. I do not ask the clemency of the court. I came into it to get justice, having failed in this, I demand the full rigors of the law."