Elizabeth Cady Stanton was not Against Reproductive Rights

Today’s anniversary of Roe v. Wade renewed the debate over abortion and feminism. One group, Feminists for Life says that feminists should oppose abortion because it devalues motherhood.  FFL rests much of its strategy both in the press and in the courts on a claimed historical record of "feminist foremothers" against abortion.  It has, quite literally, adopted Elizabeth Cady Stanton and Susan B. Anthony as their poster children, claiming these famous women were “strongly opposed to abortion.”  (See also the Susan B. Anthony List, a PAC to elect pro-life women to Congress). 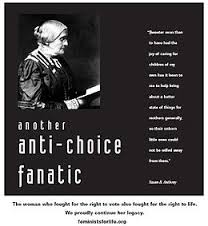 I wrote an article challenging this conclusion as to Stanton, Misappropriating Women's History in the Law and Politics of Abortion, 36 Seattle L. Rev. 1 (2012).  Scholars of Anthony have similarly refuted the claim on her legacy.  Ann Gordon & Lynn Sherr, Sarah Palin is No Susan B. Anthony.  For Stanton, the historical evidence is flimsy at best.  FFL reluctantly admitted this and at least temporarily stopped selling the Stanton anti-abortion coffee mugs.  More importantly, Stanton advocated a woman's “right to her own self.”  What she called “the right of self-sovereignty” was woman’s singular right to control her own body, sexual relations and reproductive decisions.