As NY 1, among others, reported:

Married lesbian couples in the city can now be listed as parents on their children’s birth certificates.

The city Board of Health voted in favor of the change yesterday.

Previously, women would have to go through an adoption process to be listed as the official parents.

The state made a similar move in December, after a court ruling and an order from Governor David Paterson that state agencies respect out-of-state gay marriages. But the city DOH operates independently of the state, and made its own decision.

Married male couples still will need to adopt their children in order to be officially listed as their parents.

New York does not permit same-sex couples to marry, so the reference is to couples married in other states or Canada.

Michigan Governor Jennifer Granholm has proposed a human services budget that cuts child welfare prevention and family preservation services, and increases funding for out-of-home care.  The Blog's March 13, 2009 entry provides a link to a study of Florida's child welfare system that demonstrates Florida's success in saving money and protecting children by employing the opposite approach.

Share
The Center on Children and Families at the University of Florida Levin College of Law is launching the Juvenile Justice Project, an effort to benefit children locally, statewide and nationally by focusing on the juvenile justice system.  The project will provide research, advocacy, conferences, workshops and projects in this area and welcomes collaboration with others. The project will host its first conference on February 19 and 20, 2010.  The plenary speakers  are Geoffrey Canada, the founder and president of the Harlem Children’s Zone, the innovative project profiled by Paul Tough in Whatever It Takes (2008), and Shay Bilchik, Director of the Juvenile Justice Reform Project at Georgetown, and former president of the Child Welfare League of America.  Additional confirmed participants include Bob Schwartz (Juvenile Law Center), Chris Slobogin (Vanderbilt), Mark Fondacaro (John Jay College, CUNY), Alex Piquero (Maryland) and Kenneth Nunn (Florida). For further information about the first conference, which will focus on issues of prevention and avoidance,  and for the call for paper, see the website. Registration information to attend the conference will be available in fall 2009.  For more information contact: Nancy E. Dowd  dowd@law.ufl.edu or Shari King king@law.ufl.edu

Many courts resort to the dictionary when trying to decide the "common meaning" of a word, including a word such as "marriage."

According to the online Merriam-Webster Dictionary here:

Note definition 1a(2): the state of being united to a person of the same sex in a relationship like that of a traditional marriage <same-sex marriage>.

There is apparently some controversy, reported over at  Pam's House Blend.

Perhaps the solution to the "marriage wars" is the abolition of marriage?  It's a proposal that has been made from different theoretical perspectives in years past, but of late it has been garnering attention.  TIME MAGAZINE picked up a piece published earlier this month in the SF Chronicle authored by two Pepperdine law profs who recommend that the California Supreme Court in Strauss v. Horton (the Proposition 8 case, see more here),

Direct the state to employ non-marriage terminology for all couples - be it civil union or some equivalent.

Interestingly, there is also anew California Initiative, blogged over on ConLawProf here, that

Replaces the term “marriage” with the term “domestic partnership” throughout California law, but preserves the rights provided in marriage. Applies equally to all couples, regardless of sexual orientation.

Meanwhile, the Vermont legislature which passed its civil union law for same-sex couples after Baker v. State,  is considering opening marriage to same-sex couples, according to the NYT here.

A report prepared by University of South Florida researchers describes Florida's use of a federal waiver on expenditure of Title IV-E funds.  Since October 2006, Florida has redirected monies from out-of-home care (i.e., foster care and group home placements) by expanding prevention, family preservation, and in-home and other diversionary services and supports for families involved in, or at risk of involvement in, the child welfare system.  According to the data-laden report, Florida's community-based approach has resulted in improved outcomes for children with respect to safety and permanency, potentially signaling important innovations in child welfare policy and practice. 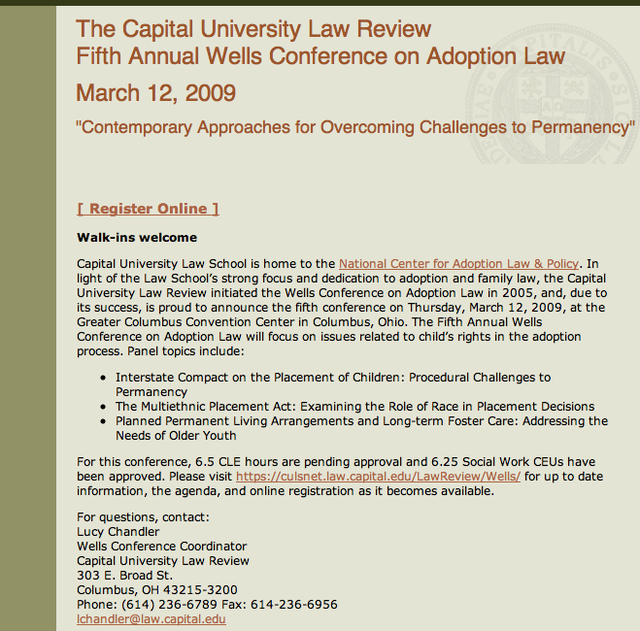 In his forthcoming article, "Child Welfare and Future Persons",  Carter Dillard, Westerfield Fellow, at Loyola University, New Orleans takes on the questions raised by State v. Oakley, 629 NW2d 200 (Wis. 2001) that we find in most of our family law textbooks -- that is, when, if ever, are orders prohibiting procreation constitutional and enforceable?  Here is the abstract of the article:

While ethicists have delved deep into the rights and wrongs of procreating, lawyers have had little to say about the matter, stymied by practical concerns, the tendency of the law to ignore prospective children and their interests, and the misperception that a fundamental rights boundary absolutely forbids state intervention. But recently a small door has opened in this wall between law and ethics: as courts faced with having to repeatedly remove abused and neglected children from parents adjudged unfit have issued temporary no-procreation orders. As precedent builds and the possibility of ex ante regulation of procreation and parenthood grows, a moral and legal debate is developing over what duties prospective parents owe their future children and the society with which those children will interact. But increasingly the debate is a muddle of inapposite and conflicting state probation and constitutional law in search of statutory guidance. This Article attempts to cut through it, and to state the intermediate-level principle at its core:

The Article then argues for codification of this principle, to be applied in cases of recurring child abuse and neglect.

For those of you who like to incorporate celebrity family law disputes in your teaching, a copy of the actual restraining order issued against Chris Brown can be found at http://www.etonline.com/documents/et_cbrown_minuteandprotectiveorder_090306.pdf

Associate Professor Alicia Brokars Kelly of Weidener University School of Law has posted to SSRN her article, Money Matters in Marriage: Unmasking Interdependence in Ongoing Spousal Economic Relations, forthcoming in the Louisville Law Review (2008).  Her abstract of the article indicates that:

This Article presents a rare exploration of the interactions among money, marriage and law while the relationship is ongoing. Using insights on the relational landscape from the social sciences as a lens, I examine the law’s regulation of spousal economic relations and its account of and potential impact within a functioning marriage. Building on my previous work, my claim is that the law governing money in marriage should be grounded on a distinctive and clarified model of partnership marriage that understands the relationship to be of equal persons who join forces to share the burdens and benefits of a shared life. Contrary to the view that a partnership ideal is not well suited for the task, the framework I propose includes and advances the values of sharing and intimacy, but also supports individual autonomy and equality. Uniquely bringing together and evaluating contemporary marital property regimes and the duty of support, I critique the majority approach to both as it privileges a solitary market achievement model of wealth acquisition, disregarding unpaid work. This hyper-individualistic view works to perpetuate gender hierarchy and threatens individual autonomy, and at the same time undermines the norms of sharing and interdependence that are central to the relationship. In contrast, I endorse the shared and equal ownership rule in community property states as it rightly reflects the values of partnership marriage, and I argue for adoption of default rules of shared control over much marital wealth. Partnership marriage also demands a transformation of the duty of support into a simpler and broader egalitarian rule of shared marital wealth, untied from dependency—and enforceable even during marriage.

States require youth to leave foster care at ages that vary from 18 to 21.  Abundant research shows that children who are "emancipated" directly from foster care to adulthood are at "high risk for a number of adverse outcomes during their transition to adulthood, including economic insecurity, housing instability, criminal justice involvement, and early child-bearing."  Chapin Hall at the University of Chicago recently issued a report reviewing state "policies and procedures designed to support youth transitioning out of foster care." (free registration on the Chapin Hall website may be required to access the free report)

Today, the California Supreme Court heard oral arguments for three hours on the challenge to California's Proposition 8.   I've blogged about the arguments on ConLawProf here. 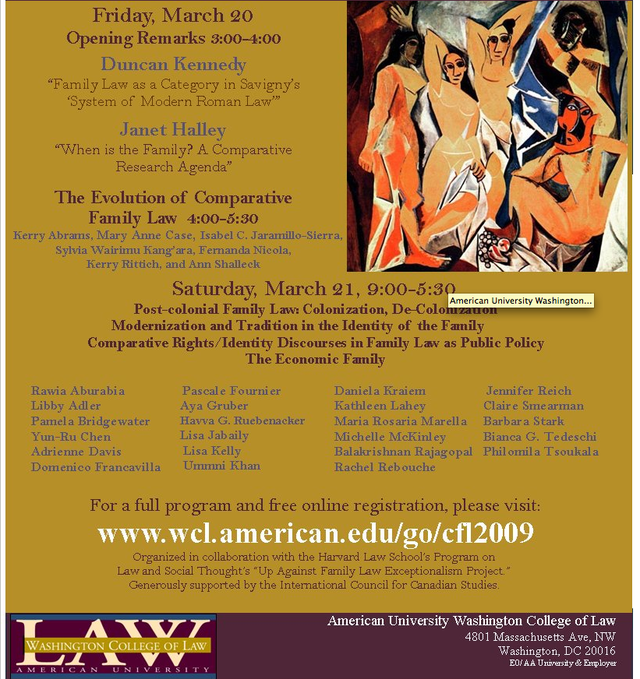 Gay & Lesbian Advocates & Defenders (GLAD) filed a 92 page complaint today in the US District Court for Massachusetts.  Same-sex marriage has been recognized as a matter of state law in Massachusetts since the state’s highest court decided Goodridge v. Dept. of Public Health, 798 N.E.2d 941 (Mass. 2003).

I've discussed this over at the Con Law Prof Blog here.

The Association of Family and Conciliation Courts (AFCC)’s 46th annual conference will be held at the Sheraton New Orleans, May 27-30, 2009. The conference, titled "Children, Courts and Custody: Back to the Future or Full Steam Ahead?" will examine how family law research, practices and processes have evolved over the years, paradigms have shifted, controversies have arisen and myths have been debunked. The program features 70 workshops, including three-hour advanced sessions, three plenary sessions and your choice of six day-long pre-conference institutes. There will be nearly 200 world class presenters, including plenary presenters Paul Amato, Ph.D., Jennifer McIntosh, Hon. Peter Boshier, Daniel Goldberg, LL.B., Mindy Mitnick, M.Ed., Mary E. O’Connell, J.D., Arnold T. Shienvold, Ph.D., Hon. R. James Williams, and moderators Dianna Gould-Saltman, J.D., Jana B. Singer J.D., and Andrew Schepard, J.D. Conference sessions will cover a range of topics examining challenges to conventional child custody wisdom including assertions about 50/50 parenting, the child’s role in the process, the resiliency of children after divorce, the changing role of the court systems in resolving family disputes and more. The Conference will be held at the Sheraton New Orleans, located on Canal Street at the edge of the French Quarter. For more information, to view the conference brochure or to register visit AFCC online at www.afccnet.org. (last visited March 2, 2009 bgf)