Today, Judge Don W. Thompson of the Superior Court of Walker County granted Joey Watkins's petition for writ of habeas corpus, meaning that Joey's conviction for murdering Isaac Dawkins has been tossed. Here is Judge Thompson's opinion. The State now has four options: (1) appeal by right to the Supreme Court of Georgia; (2) drop the charges against Joey; (3) seek to negotiate a plea deal with Joey to avoid a new trial; or (4) have a retrial. In terms of appealing, though, the State's prospects seem pretty dim because Joey won on both of the issues in his habeas petition, and he only needed to win on one of the issues to get a new trial. Therefore, the State would need to win both issues on appeal. So, what were those issues?

As I noted in a prior blog post (and as we discussed on Undisclosed):

On January 11, 2000, Wayne Benson saw two vehicles engaged in a cat-and-mouse game a little under a mile north of Floyd College in Rome Georgia. Thereafter, about 1.9 miles further north-ish, one of the vehicles -- a truck driven by Floyd College student Isaac Dawkins -- crashed, followed by a 911 call reporting the crash at 7:19pm. Dawkins later died, and it was determined that his death was caused by a 9mm bullet to the head. Subsequently, someone shot a dog [the State asserted that it was Isaac Dawkins's dog] and placed the dog on Dawkins's grave.

At trial, the defense claimed that a 7:15pm phone call on Joey Watkins's phone pinged a tower that make it physically impossible that he was in the other vehicle involved in the cat-and-mouse game: a blue car. As Judge Thompson noted in his opinion:

But, according to Judge Thompson, this was more than just a defense argument; it was essentially the truth. During Undisclosed, Susan Simpson talked to a holdout juror in the Joey Watkins who changed a verdict after doing a faulty drive test to determine whether Joey could have made it from the location of the cell tower ping to (near Floyd College in time). In finding that this jury misconduct prejudiced Joey and entitled him to a new trial, Judge Thompson ruled as follows:

Ouch! That's as close as it comes to a judge completely trashing the State's case.

This takes us to the second issue that Joey raised, which is that the State withheld evidence that the dog was killed by a .22 bullet, a different caliber bullet than the 9mm bullet used to kill Isaac Dawkins. According to Judge Thompson, of the caliber of the bullet used to kill the dog had been disclosed to the defense, evidence connected to the killing of the dog would have been inadmissible because nothing tied Joey to that killing. Specifically, Judge Thompson ruled as follows: 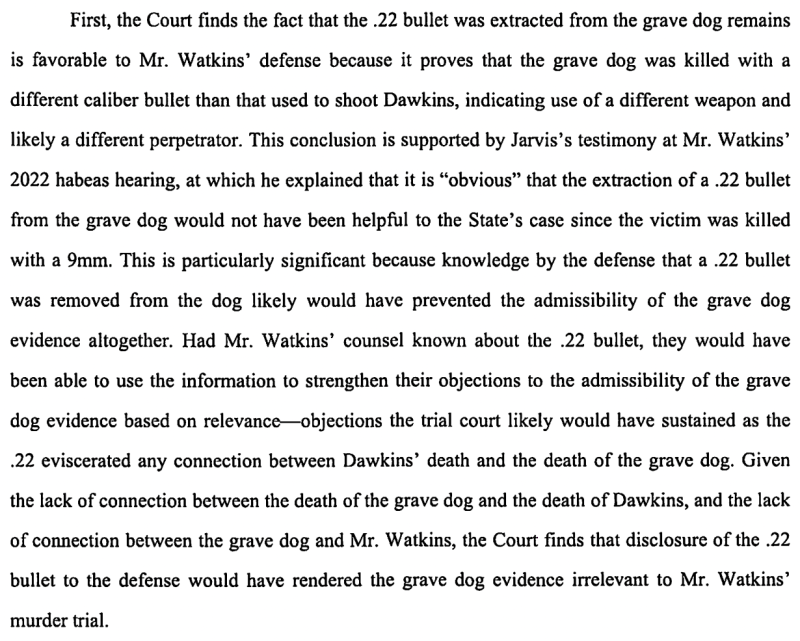 Given that Judge Thompson essentially mocked the State's case against Joey Watkins in his opinion, it's tough to see the State winning its appeal or a retrial, but you never know. Stay tuned.

Such great news, I really hope the state concedes. Seems very similar to Adnan at this point though so I don’t want to get too optimistic yet. Any idea how long the state has to make a decision?

This is fantastic news! How long does the state have to appeal the ruling (should they choose to do so)?

Amazing news! Do I recall correctly that there was some deception on the part of the state concerning the bullet? Perhaps a representation that it was never recovered at all ? I seem to recall that.

I can't believe that the state decided to appeal!!