On September 28, 2017, Nikki Addimando fatally shot her boyfriend Christopher Grover. There is significant evidence that Chris was physically and sexually abusing Nikki and that she feared for her life when she fatally shot him:

In 2017, Addimando was a stay-at-home mom-of-two living in Poughkeepsie, New York with her partner, gymnastics coach Christopher Grover. On the night of September 27th, she shot Grover to death in their home in what she described as the culmination of years of physical and sexual torture. A gun-wielding Grover had threatened to kill her and then himself, Addimando told authorities, and when he momentarily dropped the weapon, she grabbed it and shot him in self-defense.

For years, Addimando had told friends, healthcare providers, and even the police that she was being abused. Her injuries—many photographed and documented by professionals—were horrifying, and included bruises, black eyes, and genital burns resulting from, she said, Grover assaulting her with a spoon heated over the stove. A victim assistance program Addimando turned to for support had assessed that she was in the category of victims at highest risk of being murdered by her partner. Grover’s phone had been used to search for the phrase, “​​Will police know if ahe [sic] was asleep when I shoot her?” just before he died, supporting Addimando’s claim that her life was in immediate danger on that particular evening. 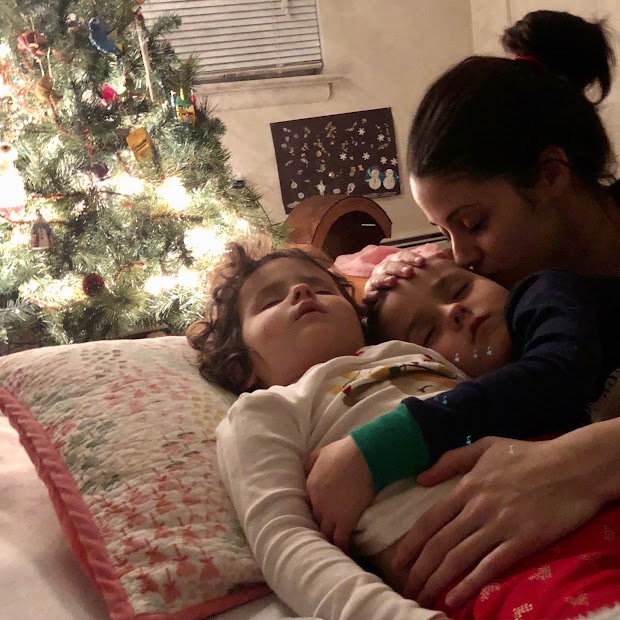 Nikki and her kids

The day before Nikki shot Chris, Child Protective Services (CPS) had come to their apartment. A woman named Lizabeth, a social worker whose kids went to the gym where Chris and Nikki worked, was talking with her friend about the gym, and the friend

started going on, and she said, well, we’re all worried about Nikki. And then I was like, oh, you’re talking about Chris. Chris, the head coach Chris. And I was like, you know, very much in disbelief. And I can remember her saying that people were afraid that it was getting worse, that there were bruises that often were seen on her on a regular basis. And she said, you know, I told my friends I was going to ask you because you’re a social worker, what to do. And I said, well, why is no one called CPS like why? There’s kids in the home? Why is no one you know, called Child Protective Services? And she said, I think you know, they’re scared to, they don’t know if they should.

I provided pro bono assistance to Nikki's defense team, including reviewing all of her jailhouse phone calls to determine whether they contained anything incriminatory. They did not. And yet, at trial, the prosecution portrayed Nikki as a black widow who wanted Chris dead and who had self-inflicted her own injuries. In 2019, the jury found Nikki guilty of second-degree murder, and Judge Edward McLoughlin sentenced her to 19 years in prison.

“It’s clear you’ve been abused by other men,” McLoughlin told Nikki. She may have “reluctantly consented” to “intimate acts you were very uncomfortable with,” he said. “Clearly someone who would make the choices you did is a broken person.…When you boil it all down, it comes to this, you didn’t have to kill him.”

In 2019, however, New York enacted the Domestic Violence Survivors Justice Act (DVSJA), which expanded the situations in which judges can consider domestic violence survivors’ abuse when determining appropriate sentences for those who commit offenses. Judge McLoughlin found that the DVSJA did not apply to Nikki, concluding that Nikki should have left if she was indeed being abused. An appellate court disagreed, concluding that

Judge McLoughlin's opinion was based on an arcane belief/suggestion that the defendant could have avoided the murder by withdrawing from her apartment; and

The court thus reduced her sentence from 19 years to 7.5 years. That's not good enough. I am 100% convinced that Nikki is innocent and was abused by both Chris and the criminal justice system. You can learn more about her case at the website We Stand With Nikki and the top notch podcast, "Believe Her."

And you can help. Nikki has applied for clemency with New York Governor Kathy Hochul. Here is a Google Docs form you can fill out in a few minutes asking Governor Hochul to grant Nikki clemency.

I have included two photos after the jump documenting some of the abuse Nikki suffered.

A statement contained in a treatise, periodical, or pamphlet if:

(A) the statement is called to the attention of an expert witness on cross-examination or relied on by the expert on direct examination; and

(B) the publication is established as a reliable authority by the expert’s admission or testimony, by another expert’s testimony, or by judicial notice.

If admitted, the statement may be read into evidence but not received as an exhibit. A treatise used in direct examination must be disclosed to an opposing party without charge in discovery.

So, does it matter that the Rule uses the word "disclosed" instead of "produced" in the last sentence? According to the recent opinion of the Court of Appeals of Mississippi in Fonville v. Zeid, 2021 WL 4165947 (Miss.App. 2021), the answer is "yes."

Similar to its federal counterpart, Pennsylvania Rule of Evidence 406 provides that

Evidence of a person’s habit or an organization’s routine practice may be admitted to prove that on a particular occasion the person or organization acted in accordance with the habit or routine practice. The court may admit this evidence regardless of whether it is corroborated or there was an eyewitness.

Court of Appeals of Mississippi Finds Victim's Question "Why Did You Shoot Me?" Admissible as a Dying Declaration

Similar to its federal counterpart, Mississippi Rule of Evidence 804(b)(2) provides an exception to the rule against hearsay

In a prosecution for homicide or in a civil case, [for] a statement that the declarant, while believing the declarant’s death to be imminent, made about its cause or circumstances.

So, would a victim's question "Why did you shoot me?" be admissible under this dying declaration exception if the defendant claims self-defense? This was the question addressed by the Court of Appeals of Mississippi in its recent opinion in Dille v. State, 2021 WL 3732274 (Miss.App. 2021).

Federal Rule of Evidence 701 provides that

If a witness is not testifying as an expert, testimony in the form of an opinion is limited to one that is:

(a) rationally based on the witness’s perception;

(b) helpful to clearly understanding the witness’s testimony or to determining a fact in issue; and

(c) not based on scientific, technical, or other specialized knowledge within the scope of Rule 702.

Opinion testimony by an eyewitness identifying the perpetrator would typically be admissible under Rule 701. But that was not the case in United States v. Howell, 2021 WL 5177103 (6th Cir. 2021).