The Proposed Amendment to Federal Rule of Evidence 615

At a party’s request, the court must order witnesses excluded so that they cannot hear other witnesses’ testimony. Or the court may do so on its own. But this rule does not authorize excluding:

(a) a party who is a natural person;

(b) an officer or employee of a party that is not a natural person, after being designated as the party’s representative by its attorney;

(c) a person whose presence a party shows to be essential to presenting the party’s claim or defense; or

(d) a person authorized by statute to be present.

Meanwhile, here is the amendment: 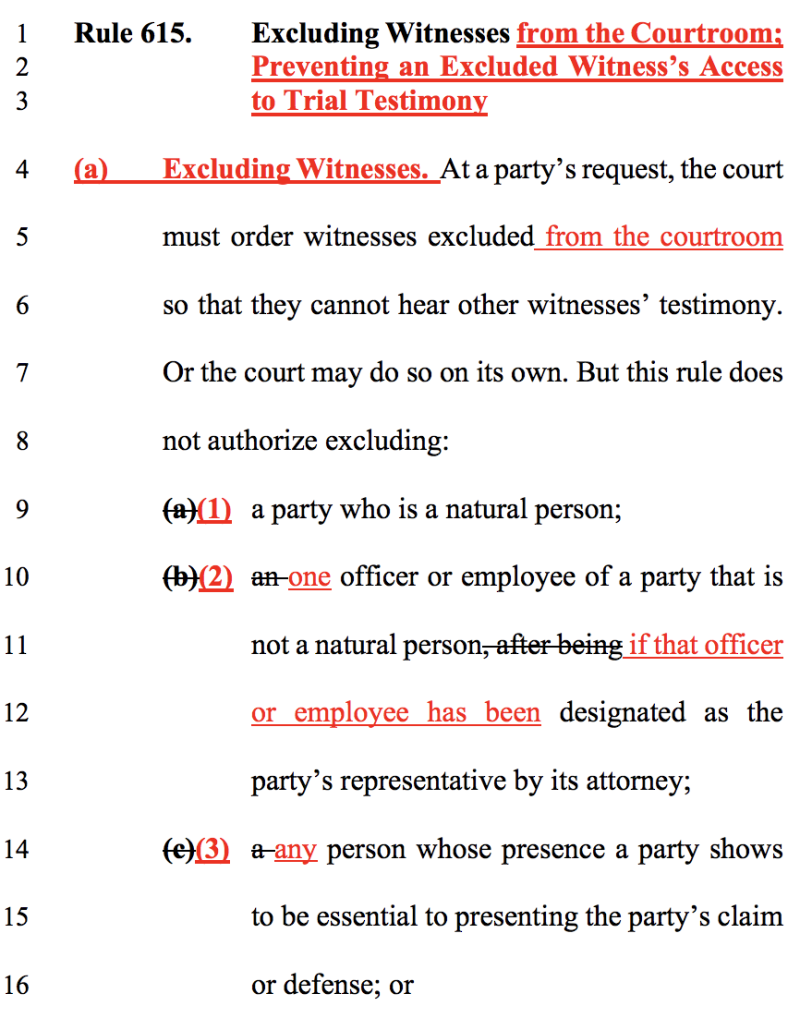 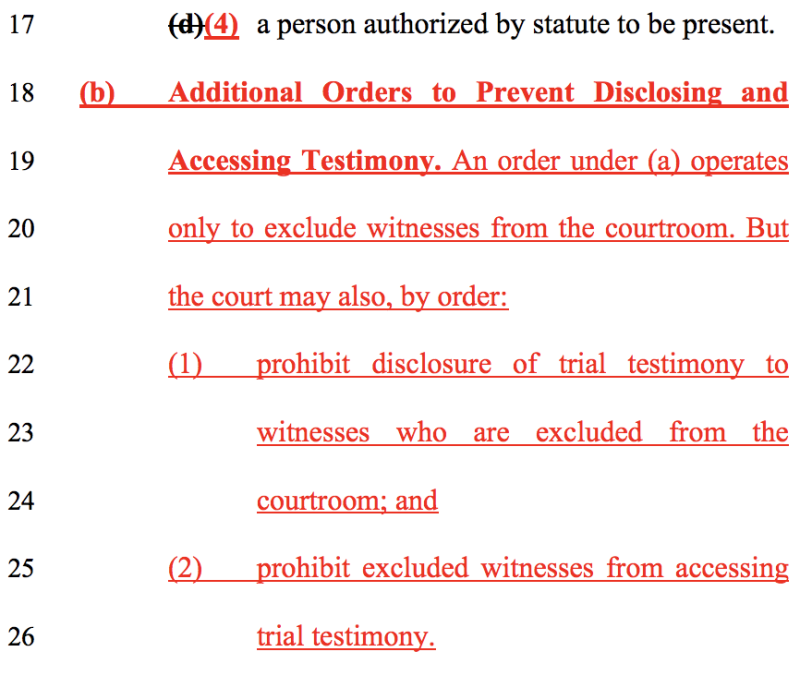 The second is the scope of Rule 615. As I noted in this post,

Despite witness sequestration's deep origins,...courts vary in their interpretations of modern rule 615's scope. Some courts rely on the rule's literal language - “the court must order witnesses excluded so that they cannot hear other witnesses' testimony,” Fed. R. Evid. 615 - to describe a rule applicable only to hearing another witness' testimony in the courtroom....

Other courts read rule 615 more broadly, extending rule 615's application beyond the courtroom and beyond case-in-chief testimony. Courts have, for instance, concluded that rule 615's prohibition on “hearing” other witnesses' testimony precludes reading transcripts of that testimony....

Other courts, including the United States Court of Appeals for the Tenth Circuit, read rule 615 to prohibit witnesses from discussing testimony and trial even outside the courtroom.

The amended rule now details exactly the scope of Rule 615 beyond mere witness sequestration. According to the Committee Note,

Most importantly, the amendment clarifies that the court, in entering an order under this rule, may also prohibit excluded witnesses from learning about, obtaining, or being provided with trial testimony. Many courts have found that a “Rule 615 order” extends beyond the courtroom, to prohibit excluded witnesses from obtaining access to or being provided with trial testimony. But the terms of the rule did not so provide; and other courts have held that a Rule 615 order was limited to exclusion of witnesses from the trial. On the one hand, the courts extending Rule 615 beyond courtroom exclusion properly recognized that the core purpose of the rule is to prevent witnesses from tailoring their testimony to the evidence presented at trial—and that purpose can only be effectuated by regulating out-of-court exposure to trial testimony. See United States v. Robertson, 895 F.3d 1206, 1215 (9th Cir. 2018) (“The danger that earlier testimony could improperly shape later testimony is equally present whether the witness hears that testimony in court or reads it from a transcript.”). On the other hand, a rule extending an often vague “Rule 615 order” outside the courtroom raised questions of fair notice, given that the text of the rule itself was limited to exclusion of witnesses from the courtroom.

An order under subdivision (a) operates only to exclude witnesses from the courtroom. This includes exclusion of witnesses from a virtual trial. Subdivision (b) emphasizes that the court may by order extend the sequestration beyond the courtroom, to prohibit parties subject to the order from disclosing trial testimony to excluded witnesses, as well as to directly prohibit excluded witnesses from trying to access trial testimony. Such an extension is often necessary to further the rule’s policy of preventing tailoring of testimony.

The rule gives the court discretion to determine what requirements, if any, are appropriate in a particular case to protect against the risk that witnesses excluded from the courtroom will obtain trial testimony.

Nothing in the language of the rule bars a court from prohibiting counsel from disclosing trial testimony to a sequestered witness. However, an order governing counsel’s disclosure of trial testimony to prepare a witness raises difficult questions of professional responsibility and effective assistance of counsel, as well as the right to confrontation in criminal cases, and is best addressed by the court on a case-by-case basis.

It seems like a good amendment. So, under this, could a business party still have additional officers/employees present if that is essential to presenting the party’s case?

I am glad to see this. . The State and Federal Judges in Kentucky go different ways on their interpretations of Rule 615. This can lead to some unfortunate misunderstandings. I discussed this in an article in AM. J. TRIAL ADVOC. a few years back.

The article was Following the Rules: Exclusion of Witnesses, Sequestration, and "No-Consultation" Orders, 35 AM. J. TRIAL ADVOC. 513 (2012).