So, under Rule 106, assume that Erica sees Dana stab Victoria and quickly sends text messages to her friend Felicia saying, "Dana just stabbed Victoria!" and "It looked like Victoria had pulled a gun on Dana!" If the prosecution introduces only the first text message in its case-in-chief as a present sense impression or excited utterance, the defense could move under Rule 106 to have the second message introduced at the same time because it would be unfair for the jury to only hear the first text message and not hear the second one until days later.

There are two major issues with the current Rule. The first is that it only covers writings and recorded statements, not oral statements (like its common law counterpart). The second is the question of whether the Rule is merely a rule of timing or also a rule of admissibility.

So, under Rule 106, assume instead that Erica saw the stabbing outside Felicia's house, walked inside, and said to Felicia, "Dana just stabbed Victoria!" and "It looked like Victoria had pulled a gun on Dana!" Rule 106 wouldn't apply to these oral statement, meaning that the prosecution could introduce just the first statement in its case-in-chief and the defense would have to wait to introduce the second statement (unless the court applied the common law rule).

Finally, under Rule 106, assume instead that Erica (1) saw Dana stab Victoria; (2) quickly sent a text message to her friend Felicia saying, "Dana just stabbed Victoria!"; and (3) sent Felicia a text message hours later saying, "It looked like Victoria had pulled a gun on Dana!" While the first text message is likely a present sense impression/excited utterance, the second message is arguably inadmissible hearsay.

The proposed amendment addresses both of these issues. Here it is: 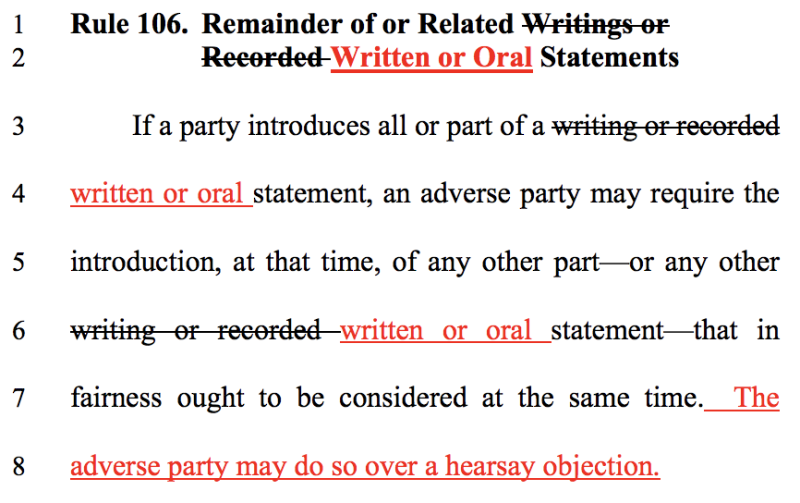 Rule 106 has been amended in two respects. First, the amendment provides that if the existing fairness standard requires completion, then that completing statement is admissible over a hearsay objection. Courts have been in conflict over whether completing evidence properly required for completion under Rule 106 can be admitted over a hearsay objection. The Committee has determined that the rule of completeness, grounded in fairness, cannot fulfill its function if the party that creates a misimpression about the meaning of a proffered statement can then object on hearsay grounds and exclude a statement that would correct the misimpression....

Second, Rule 106 has been amended to cover oral statements that have not been recorded. Most courts have already found unrecorded completing statements to be admissible under either Rule 611(a) or the common-law rule of completeness. This procedure, while reaching the correct result, is cumbersome and creates a trap for the unwary. Most questions of completion arise when a statement is offered in the heat of trial—where neither the parties nor the court should be expected to consider the nuances of Rule 611(a) or the common law in resolving completeness questions. The amendment, as a matter of convenience, covers these questions under one rule. The rule is expanded to now cover all writings and all statements—whether in documents, in recordings, or in oral form.

I like the amendment. Including oral statements seems totally uncontroversial and helpful. Supplanting hearsay is a closer call I think, but presumably the fairness analysis can take that into account somehow.