Equal Opportunity Employer Statement: LSU is committed to providing equal opportunity for all qualified persons in admission to, participation in, or employment in the programs and activities which the University operates without regard to race, creed, color, marital status, sexual orientation, gender identity, gender expression, religion, sex, national origin, age, mental or physical disability, or veteran’s status. LSU is committed to diversity and is an equal opportunity / equal access employer. LSU believes diversity, equity, and inclusion enrich the educational experience of our students, faculty, and staff, and are necessary to prepare all people to thrive personally and professionally in a global society. To learn more about how LSU is committed to diversity and inclusivity, please see LSU’s Diversity Statement and Roadmap.

Applications should include a letter of application, resume, references, and teaching evaluations to:

Fifth Circuit Grants Qualified Immunity To Officers Who Tased Man Soaked in Gasoline, Knowing it Would Light Him on Fire

The qualified immunity doctrine insulates governmental agents from liability for unconstitutional acts as long “as their conduct does not violate clearly established statutory or constitutional rights of which a reasonable person would have known.”  The primary purpose of the doctrine “is to protect them ‘from undue interference with their duties and from potentially disabling threats of liability.’” So, should there be qualified immunity in a case with these facts?

1. knowing that he was soaked in gasoline,

2. knowing from recent training that tasers ignite gasoline, and

3. knowing from a fellow officer’s explicit warning in that instant, “If we tase him, he’s going to light on fire!”

They fired their tasers anyway, knowing full well that using a taser was tantamount to using a flamethrower. Olivas burst into flames and later died.

Can a witness testify that he believes the defendant is guilty? For example, consider the following testimony by a sergeant at the trial of Charles Reedy for the murder of Glen Burford:

Q. Have you had training and experience in classes to follow—to run an investigation, to collect evidence, and to be guided where that evidence takes you?
A. Yes, sir. I've gone through many trainings on things as simple as interview interrogation to crime scene investigations. I do advanced homicide investigations.
Q. Did you follow those protocols in this case?
A. Yes, sir.
Q. And when you looked at all the evidence that you reviewed—have you reviewed it multiple times, the evidence?
A. Yes, sir.
Q. Do you have any doubts in—
[Defense counsel]: Your Honor, I'm going to object that it's the jury's job to determine what the facts reveal and not the detective[']s.
The Court: It is the purview of the jury to decide what the evidence shows and to make a finding in this case[;] however, that does not prevent a witness from giving an opinion in the case. So you may give your opinion, ma'am.
Q. So in your opinion, based on your training and experience, do you believe you know who committed the murder of Mr. Burford?
A. Yes, sir.
Q. Who is that?
A. Mr. Charles Reedy.

With firemark toolmark testimony, a ballistics expert testifies that a particular shell casing came from a particular gun. Here is how we described it in our recent Undisclosed series about the Darrell Ewing trial:

When Derrico Searcy was arrested for his role in the murder, he was in a blue BMW that was registered to a man named Garland Royal. Police Officer Lori Dillon was one of the officers completing the arrest, and while searching the BMW, she recovered three 9 millimeter shell casings from the bottom of the windshield near the wiper blades.

Those casings and casings recovered from the crime scene were sent to Robert Charlton, a toolmark examiner with the Oakland County Sheriff’s Office. Charlton’s job sounds simple: determining whether the casings from the BMW and the casings from the crime scene came from the same gun. Of course, as we noted in Episode 1 and as Charlton acknowledged in his testimony, no gun was recovered in this case, meaning he couldn’t fire a third set of bullets and compare the markings on their casings to the markings on the two other sets of casings.

But what he did sounds pretty scientific. For example, here’s one Q&A from his testimony: 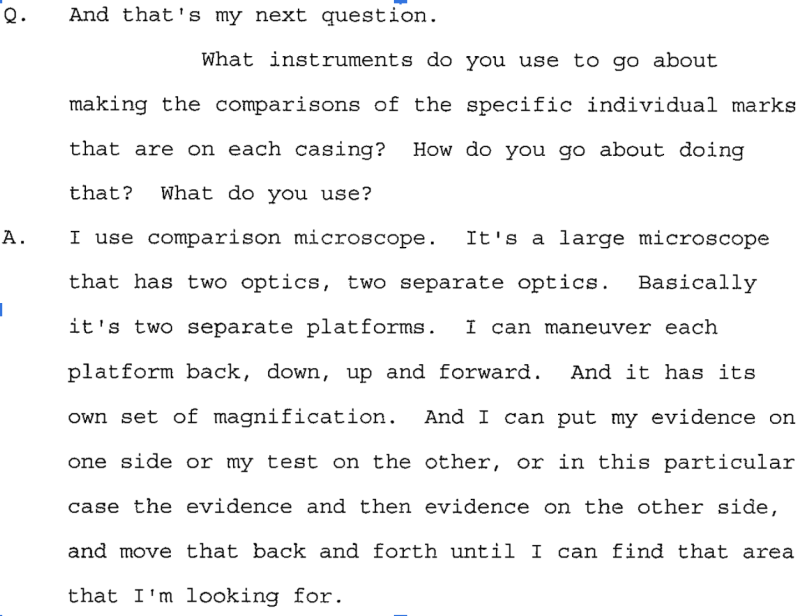 Sounds pretty cool, right? Well, it’s not. It’s junk science. In 2016, the Executive Office of the President President’s Council of Advisors on Science and Technology, or PCAST, issued a report to the President. The report noted that:

In firearms analysis, examiners attempt to determine whether ammunition is or is not associated with a specific firearm based on “toolmarks” produced by guns on the ammunition….

Firearms analysts have long stated that their discipline has near-perfect accuracy; however, the 2009 National Research Council study of all the forensic disciplines concluded about firearms analysis that “sufficient studies have not been done to understand the reliability and reproducibility of the methods”—that is, that the foundational validity of the field had not been established.

Our own extensive review of the relevant literature prior to 2009 is consistent with the National Research Council’s conclusion. We find that many of these earlier studies were inappropriately designed to assess foundational validity and estimate reliability. Indeed, there is internal evidence among the studies themselves indicating that many previous studies underestimated the false positive rate by at least 100-fold.

In other words, if Darrell Ewing were being tried in 2021, he would have a lot of ammunition for the argument that firearm toolmark evidence should be deemed inadmissible or at least taken with a huge grain of salt.

Federal Rule of Evidence 704(b) states that

In a criminal case, an expert witness must not state an opinion about whether the defendant did or did not have a mental state or condition that constitutes an element of the crime charged or of a defense. Those matters are for the trier of fact alone.

As the United States District Court for the District of Idaho noted in its recent opinion in United States v. Babichenko, 2021 WL 2364360 (D. Idaho 2021), however, "[t]he Ninth Circuit...has 'interpreted that rule much more narrowly than its text might indicate.'" So, what does that mean?

was charged in June 2013 with two counts of dealing in a controlled substance and conspiracy to commit theft, all felonies. He pleaded guilty in 2015 to selling $260 worth of heroin and served a year of home detention and five years of probation, which he is still on.

His Land Rover was taken by the government in a process known as "civil asset forfeiture," which allows police to seize and keep property alleged to have been used in a crime.

By Indiana law, however, the maximum fine for Timbs' crime was $10,000 — well below the value of the seized vehicle.

So, was this Clause violated by the forfeiture of the Land Rover?

Nick Sibilla has written the article, "Cop Who Wrongly Led No-Knock Raid Against 78-Year-Old Grandfather Can’t Be Sued, Court Rules," for Forbes. The article concerns the case of 78 year-old Onree Norris, who was the victim of a no-knock raid done at the wrong house. For more context, here was my blog post about the case.

According to a newspaper article headlined, “Police expert lied about credentials,” by Jennifer McMenamin, published 9 March 2007, in the Baltimore Sun, Kopera claimed in court to have degrees that he had not earned in fact. Kopera testified frequently that he had a degree from the Rochester Institute of Technology (“RIT”) in photographic science/engineering and, on at least one occasion, testified that his RIT degree was in aerospace engineering. Kopera claimed also to have a mechanical engineering degree from the University of Maryland. The 2007 article reported that Kopera had forged at least one document (a transcript that he claimed was from the University of Maryland) offered originally to attorneys with the Innocence Project, attempting to justify his qualifications. In response to further questions from the attorneys at the Innocence Project, Kopera provided allegedly a “certificate of training” from the United States Air Force, to what intended curative effect remains opaque. Hunt v. State, 2021 WL 2306669 (Md. 2021).

(a) A person charged by indictment or criminal information with a crime triable in circuit court and convicted of that crime may, at any time, file a petition for writ of actual innocence in the circuit court for the county in which the conviction was imposed if the person claims that there is newly discovered evidence that:

(i) if the conviction resulted from a trial, creates a substantial or significant possibility that the result may have been different, as that standard has been judicially determined; or

(ii) if the conviction resulted from a guilty plea, an Alford plea, or a plea of nolo contendere, establishes by clear and convincing evidence the petitioner's actual innocence of the offense or offenses that are the subject of the petitioner's motion; and

(2) could not have been discovered in time to move for a new trial under Maryland Rule 4-331 (emphasis added).

So, could defense attorneys have discovered Kopera's lies before 2007?

Federal Rule of Evidence 606(b) reads as follows:

(b) During an Inquiry into the Validity of a Verdict or Indictment.

(1) Prohibited Testimony or Other Evidence. During an inquiry into the validity of a verdict or indictment, a juror may not testify about any statement made or incident that occurred during the jury’s deliberations; the effect of anything on that juror’s or another juror’s vote; or any juror’s mental processes concerning the verdict or indictment. The court may not receive a juror’s affidavit or evidence of a juror’s statement on these matters.

(2) Exceptions. A juror may testify about whether:

(A) extraneous prejudicial information was improperly brought to the jury’s attention;

(B) an outside influence was improperly brought to bear on any juror; or

So, jurors generally can't impeach their verdicts, but there are three (Rules-based) exceptions. That said, many jurisdictions have rules that limit the ability of lawyers to contact jurors after a verdict. So, what should happen when a juror send a lawyer an ambiguous message? That was the question addressed by the United States District Court for the District of Montana in its recent opinion in United States v. McConnell, 2021 WL 2256276 (D. Mont 2021).

Similar to its federal counterpart, West Virginia Rule of Evidence 804(b)(6) provides an exception to the rule against hearsay for

A statement offered against a party that wrongfully caused — or acquiesced in wrongfully causing — the declarant's unavailability as a witness, and did so intending that result.

So, what exactly constitutes wrongdoing under this forfeiture-by-wrongdoing hearsay exception? That was the question of first impression addressed by the Supreme Court of Appeals of West Virginia in its recent opinion in State v. Jako, 2021 WL 2221041 (W.Va. 2021).

An Alford plea, based on the Supreme Court's opinion in North Carolina v. Alford, is a plea in which the defendant maintains her innocence but pleads guilty while acknowledging that the State has sufficient evidence to prove her guilt beyond a reasonable doubt. There's no federal (and, in most states, no state) rule of evidence governing the (in)admissibility of Alford pleas. So, what should courts do?

In its opinion today in State v. Honorable James E. Marner, 2021 WL 2197962 (Ariz. 2021), the Supreme Court of Arizona addressed a question of first impression: "whether an appearance of impropriety, arising from a prosecutor's actual misconduct, may be imputed to disqualify an entire prosecutor's office"?