Today, Judge Sylvester Cox granted the motion of Keith Davis Jr. for a new trial (Download Motion for new trial). Amelia McDonell-Parry covered Keith's case on the Undisclosed podcast. Keith's case is far too complicated to cover in a single blog post, but

Davis has been tried for the June 2015 murder of Pimlico security guard Kevin Jones four times. The trials ended with a hung jury twice, an overturned conviction once and then he was convicted again during the fourth trial and sentenced to 50 years in prison.

I believe in Keith's innocence and drafted the portion of his motion for a new trial arguing that the prosecutor committed reversible error by mischaracterizing the presumption of innocence: 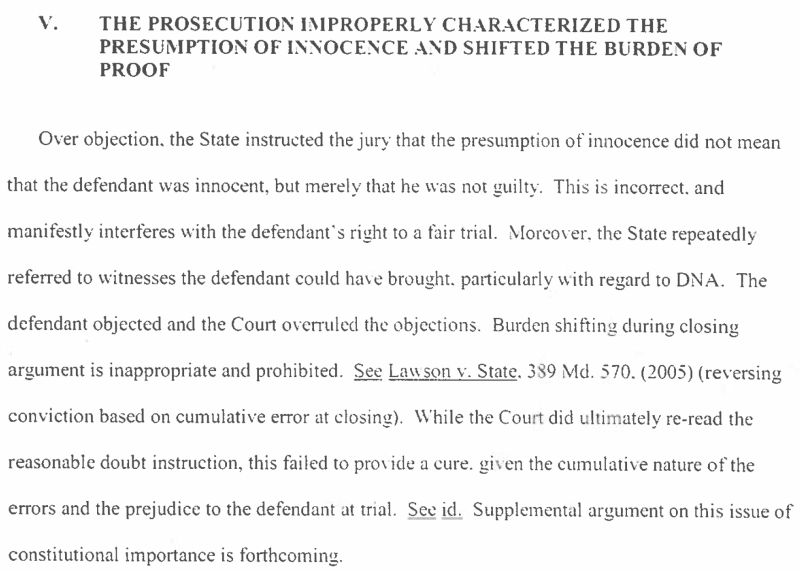 Ultimately, Keith was granted a new trial based upon Kazadi v. State, 223 A.3d 554 (Md. 2020), where the Court of Appeals of Maryland held that, "on request, during voir dire, a trial court must ask whether any prospective jurors are unwilling or unable to comply with the jury instructions on the long-standing fundamental principles of the presumption of innocence, the State's burden of proof, and the defendant's right not to testify." Because the trial judge refused to do this at Keith's trial, he's entitled to a new trial.

As Steve Klepper has noted, it does not appear that the State can immediately appeal this ruling. Therefore, it looks like the State will either drop the charges against Keith or bring him to trial for a fifth trial in connection with the murder and a sixth time overall in connection with the incident. If there is in fact a sixth trial, as far as I know Keith Davis will become only the second person prosecuted six time for the same incident, with the first being Curtis Flowers.

Best news in a long time! Hopefully they will finally drop this farce and set Keith free!!