Should a Spouse Ever be Allowed to Serve as a Juror in a Trial in Which His/Her Spouse is the Presiding Judge?

Should a spouse ever be allowed to serve as a juror in a trial in which his/her spouse is the presiding judge? That was the question of first impression addressed by the Supreme Court of Colorado in its recent opinion in Richardson v. People, 2020 WL 2829847 (Colo. 2020).

In Richardson, Gary Richardson was charged with possession of a controlled substance, violation of bail bond conditions, two counts of attempted second degree assault, and three counts of attempted third degree assault. The judge's wife was in the jury venire for the case. After peremptory challenges, during which the wife was not challenged the following exchange took place:

Later, during trial, the following occurred: 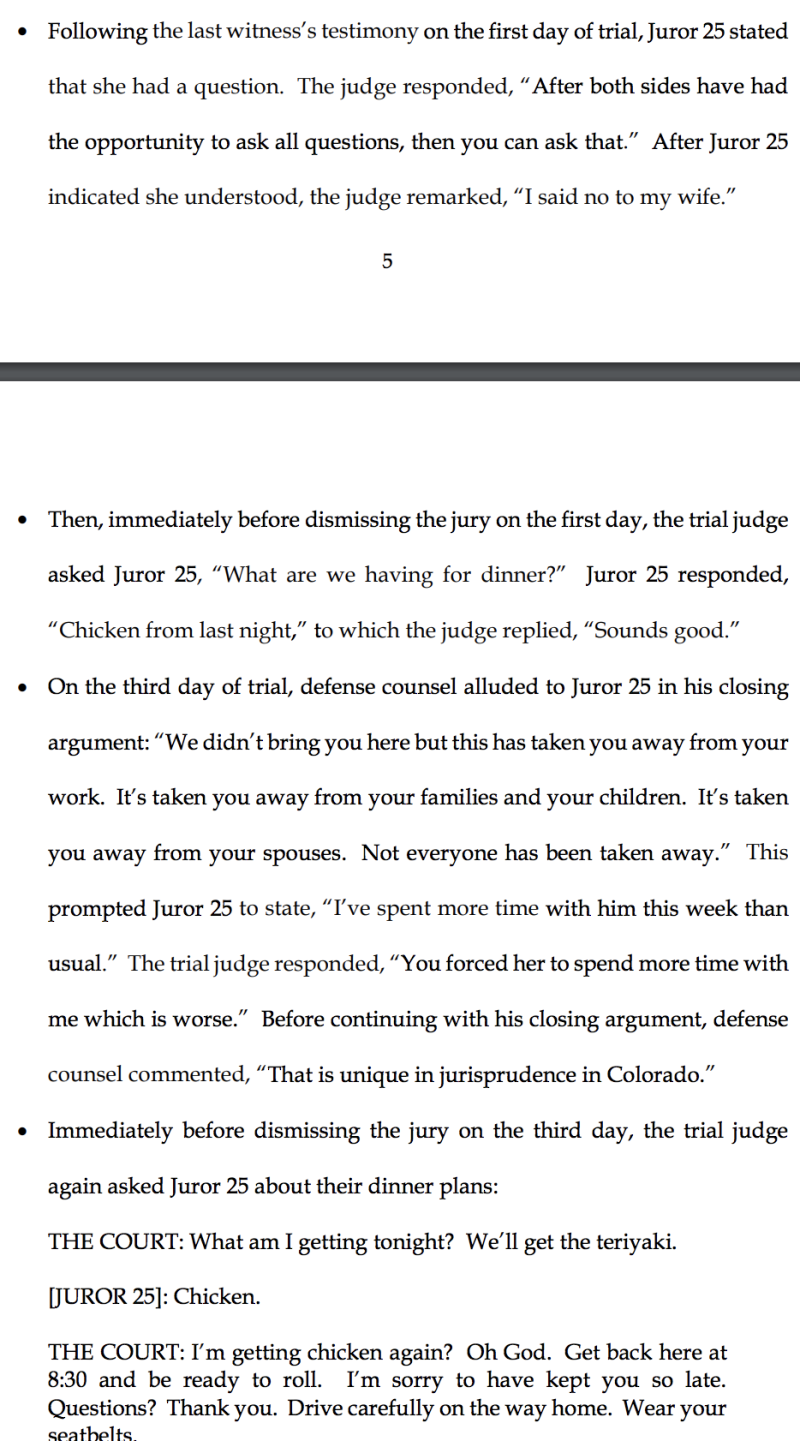 After he was convicted, Richardson appealed, claiming that the judge should have recused himself and/or his wife should not have been empaneled as a juror. A majority of the Supreme Court of Colorado disagreed, concluding that

neither a statute nor the Code expressly requires a judge to sua sponte disqualify himself when he is related to a juror. Moreover, Richardson does not contend that the trial judge was biased or prejudiced toward a party or counsel, and nothing in the record reasonably calls into question the judge’s impartiality toward the parties.

Justice Gabriel, however, dissented, holding that

Sometimes, judges’ duty to follow the law leads them to what are perhaps counterintuitive results. I do not see this as such a case, and I would reach what I perceive to be the intuitive result here, namely, that it was reversible error for the trial judge to sit on a case in which his wife served as a juror and in which he repeatedly called everyone’s attention to his relationship with her.

I agree with Justice Gabriel for two reasons. First, imagine that you were an attorney in this case and wanted to vigorously argue an objection, etc., with the judge. While there are always reasons to be gunshy about doing so, wouldn't you especially be worried when you knew his wife was in the jury box. Second, assume you were a juror who held a different opinion that the wife-juror. Wouldn't her relationship with he judge and his banter with her make you second guess your disagreement? If the answer for you or someone you know is "yes" or even "maybe," isn't that enough to argue against this situation altogether?