Possible Next Steps in the Adnan Syed Case

Today, the United States Supreme Court denied certiorari in the Adnan Syed case, meaning that the Court will not hear his appeal from the 4-3 opinion of the Court of Appeals of Maryland denying him a new trial: 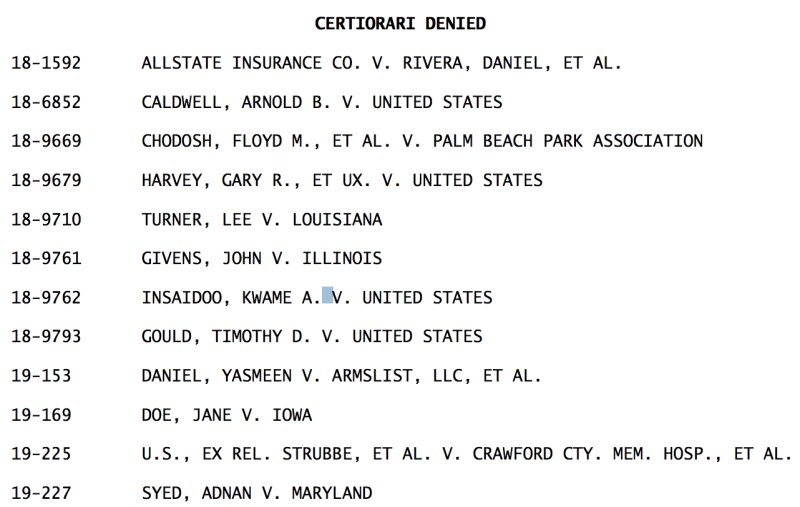 So, what are possible next steps in Adnan's case?

You might recall that all the way back in 2016 when Judge Martin Welch granted Adnan a new trial, it was not based upon his alibi claim. Instead, it was based upon his claim that his trial counsel was ineffective based upon failure to cross-examine the State's cell tower expert with the AT&T disclaimer which stated that:

Indeed, Judge Welch did not grant Adnan relief on his alibi claim because 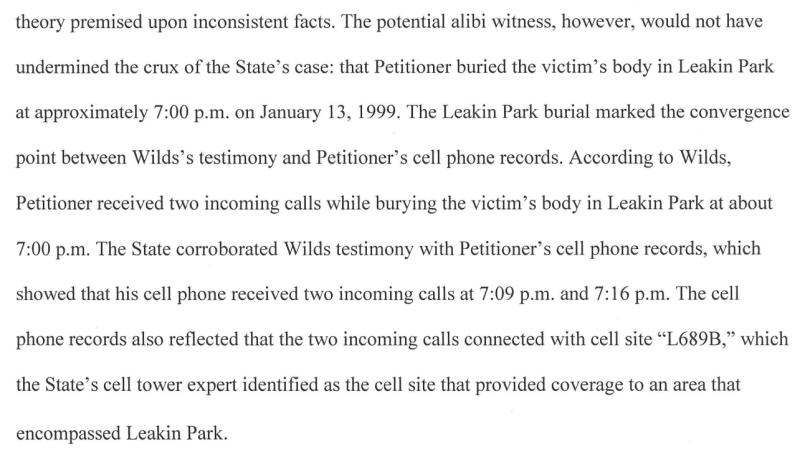 In its 4-3 opinion denying Adnan relief, the Court of Appeals of Maryland agreed with Judge Welch,  holding that

Ultimately, the post-conviction court reached the same conclusion as we do here. That court viewed Ms. McClain’s testimony in light of “the crux of the State’s case” which “did not rest on the time of the murder.” The post-conviction court reasoned that the State placed Mr. Syed in Leakin Park at approximately 7:00 p.m. on January 13, 1999 through the testimony of Mr. Wilds and the cell phone location evidence.

So, what happened with Adnan's cell tower claim? Judge Welch acknowledged that postconviction counsel did not include the claim in Adnan's initial PCR petition. But Judge Welch found that the claim involved a fundamental right that had to be knowingly and intelligently waived and that Adnan, who was arrested before he had finished high school, did not knowingly waive the complex cell tower claim. Neither the Court of Special Appeals nor the Court of Appeals disputed this factual finding, but both found that the cell tower claim was waived because Adnan's first PCR petition included claims of ineffective assistance of counsel in the first PCR petition but did not include the cell tower claim. And, because of this waiver finding, neither court disputed Judge's Welch's substantive conclusion that failure to use the AT&T disclaimer at trial was ineffective assistance of counsel. So, where does that leave us?

Such a claim in Adnan's case is remarkably straightforward. He would claim that

(1) the Court of Appeals of Maryland found that I waived my cell tower claim because my postconviction counsel did not include it in my first PCR petition; and

(2) if my PCR counsel included the cell tower claim in my first PCR petition, I would have been awarded a new trial, as established by Judge Welch's opinion granting me a new trial.

Usually, an ineffective assistance of postconviction counsel is speculative. Here, there's already been a hearing (with expert witnesses) and a ruling on the merits of the cell tower claim before the higher court found waiver. Moreover, in its ruling against Adnan's alibi claim, the Court of Appeals agreed with Judge Welch that the crux of the State's case against Adnan was the Leakin Park pings, which involved the incoming calls that would have been undermined by the AT&T disclaimer.

In theory, this should be about as much of a slam dunk claim as you can get, but, as we've just seen, Maryland has just deviated from courts across the country in handling ineffective assistance of counsel/alibi claims, so you never know.

Alternatively, Adnan could file a petition for writ of habeas corpus in federal district court. This petition would claim that the Court of Appeals violated clearly established federal law in denying him relief on his ineffective assistance/alibi claim. Unfortunately, the period of limitation for filing such a claim has long since passed. Therefore, to get into federal court, Adnan would have to use what's known as the Schlup actual innocence gateway. Under Schlup, evidence of actual innocence serves as a gateway for consideration of otherwise waived claims. To satisfy this gateway and get relief, Adnan would have to prove

(1) actual innocence, i.e., that evidence (e.g., the AT&T disclaimer, Jay's Intercept interview) exists which makes it so that no reasonable juror could find him guilty beyond a reasonable doubt; and

Adnan can also bring a petition for DNA testing under Section 8-201 of the Maryland Code of Criminal Procedure. As seen in the HBO series, the shorter wire found near Hae Min Lee's body yielded "a single source, female DNA profile. The profile is that of an unknown female (Unknown Female #1)." It's not clear what more has been done/could be done with that wire, but a petition for DNA testing could answer those questions (and hopefully other questions about the case).

Two days ago, a Baltimore Sun article noted that Maryland has begun granting parole to juvenile lifers after decades of inaction. According to the article,

Navarus Mayhew, 42, is scheduled to be released this month after 24 years in prison for first-degree murder, robbery and gun charges. Robert Davis, 54, who served 37 years for first-degree felony murder and handgun charges has been recently released, a Maryland Department of Public Safety and Correctional Services spokesman said Thursday. Shawn Delco Goodman, 42, will likely be released in December after 27 years behind bars for first-degree murder and robbery charges, according to Maryland Parole Commission records.

Adnan will be 42 and will have served 24 years in 2023. Technically, I think he's eligible for parole in 2024. Could Adnan claim he is innocent and still receive parole? On Undisclosed, we recently covered the case of Cyrus Wilson, who was soon thereafter paroled despite maintaining his innocence.

Saw this on SCOTUSblog this morning. So disappointing, given that the case's decision history went the opposite direction for every case until the Maryland Court of Appeals reversed it, and that the reversal was on a split 4-3 decision. I know this was always the most expected outcome, but it still just feels terribly fucking unjust.

My heart is with Adnan and his family. We are in for another several years, it seems, before justice can be achieved...

How does it factor in that due to fixed lividity, Hae's body could not have even been buried at 7PM??? This case is maddening. Thank you for your thorough analysis!!

I continue to think Judge Welch's analysis is the most *factually* correct of all the opinions written in this case. Syed was convicted because the State convincingly proved he was in that park on that evening, in possession of Hae's body.

It is a miscarriage of justice to let a legal issue of waiver get in the way of his ruling. Syed deserves a new trial, not because of Asia - her testimony is not relevant to why the jury convicted - but because the technical location data was brought into question.

I’ve been following this story for years now. I give up! its over...another casualty of the justice system. Teach your kids to stay away from shady people or you could get screwed over like Adnan. So discouraging smh

Still hope to hear your bombshell you've been saving. When will the bomb go off?

Paul: Disappointing but expected. We will continue fighting.

Laura: Lividity could be part of either type of actual innocence claim.

Jonathan: That’s the most frustrating thing about the Court of Appeals opinion for me. It kicked the can down the road for another few years.

Steven: Adnan has been in jail/prison for 20 years. In our 4 Philadelphia cases that led to exonerations, Willie Veasy served 27 years, Shaurn Thomas served 24 years, Chester Hollman III served 28 years, and Terrance Lewis served 21 years. These things often take decades, but you never give up.

Karl: It might be part of one of the new appeals.

Is there some sort of avenue to get the name of the crime stoppers tip?

I’m devastated. Heartbroken. Makes me wanna take my LSATs and move to the East Coast. I’m just baffled that this type of precedent is ok with SCOTUS. It’s weird. Like passing the buck to let a potentially innocent man sit for years more before they eventually will have to address this issue. It’s maddening.

I agree with Laura Cashion. The fixed lividity has been a major component to this case. Why hasn’t this been addressed?

Regarding federal habeas... is this correct?

1. He needs to establish his actual innocence. For this purpose, any and all evidence he can put together is on the table. Cell phone issues, lividity, Asia McLain, anything else he has found. All of this can get him a finding of actual innocence but that alone does not get him any relief.

2. With the actual innocence finding in hand, he can challenge the decision of the Maryland COA that CG's error in failing to contact Asia was not prejudicial. But for this challenge to succeed, the federal court must not just disagree with COA opinion, but find that COA clearly violated established federal law in reaching that finding.

Is that about right?

I think the IAC of post conviction counsel has to be the best option now as backwards as that is considering how good Justin Brown has actually been. However with this waiver thing being the one piece standing in the way of the conviction being vacated, it follows that Justin must’ve been the one to screw up there.

Colin, what will the states likely position or argument be against this?

Robert: Not as far as I know.

Amy: Unfortunately, the Supreme Court takes very few cases and very few of these are these types of criminal cases.

Lisa: New arguments couldn’t be raised in this appeal, which is why the cell tower claim was eventually dismissed. If there’s an actual innocence appeal, it will be a part of it.

Paul: The State would likely repeat its claim that Gutierrez was not deficient with regard to the disclaimer and that any possible deficiency was harmless rather than prejudicial.

But how can they argue it wasn’t prejudicial if their previous case won on the grounds that nothing in the case mattered so much as did the linkin park pings connecting Adnan to the burial?

Will they just argue again that the disclaimer doesn’t say what it plainly says instead?

Is there any documentation about the arguments why Certiorari is denied ?

I just watched all the episodes of The Case Against Adnan Syed, 4 hours straight watching this documentary, I had never heard of the case before, but I live in Europe. I was glad Adnan had not accepted the deal and I know very well how difficult it must have been for him and his family. But only in this way he could prove his innocence. Because for a guilty person such a deal would be a lottery! This is an irrefutable proof that he is innocent! There can be no greater proof! I hope his lawyers are as strong as he and his family to continue defending his innocence.

I've been following the case for a while, have done my own research into it... My main question is why hasn't Miller v. Alabama been brought into the arguments?? I know it's been 20 years, and the usually time is an average of 25 years... But his case is definition under the Miller v Alabama holding!!

This case angers and saddens me. There were so many things wrong with this case from the very beginning I can’t understand how the jury found guilt beyond a reasonable doubt. There was so much doubt. I hope and pray that he eventually gets released!

Colin, if a serious Brady violation was discovered in 2021, which implicated the involvement of an ASA, would it now be too late to use to secure Adnan's freedom?