Today, the legal team for Adnan Syed filed its Reply Brief in Support of Certiorari. This is the last document that will be filed before the Supreme Court decides whether to hear Adnan's case. All of the documents that have been filed in this case will now be distributed to the Supreme Court justices. Adnan's case will then be discussed at conference, with the likeliest dates being November 15th, November 22nd, December 6th, or December 13th. We will likely hear the Court's decision the following Monday. If 4+ Justices agree to "grant cert," the Supreme Court will hear the case. If 3 or fewer Justices agree to "grant cert," the Supreme Court will not hear the case, and the alibi appeal will be over. So, what does Adnan's team argue in its Reply Brief?

To answer this question, let's start with the defense's Petition for Writ of Certiorari. In that cert petition, the defense argued that

the Ninth Circuit explained that Strickland calls for courts to “leave undisturbed the prosecution’s case” when “analyzing the evidence that would have been presented had counsel not performed deficiently.”...This analysis, the court cautioned, does not leave courts free “to reimagine the entire trial.”

Next, let's look at the State's Brief in Opposition. In that Brief, the State argued that

The “split” envisioned by Syed is illusory. The Maryland Court of Appeals assessed prejudice by looking at “the totality of the evidence before the jury,”... just as the courts did in the ten other cases cited by Syed, and just as Strickland commands.

Now, in its Reply Brief in Support of Certiorari, the defense argues that

The defense makes this point by focusing on how the analysis used by the Court of Appeals of Maryland in the Adnan Syed case could have changed the outcomes in the cases it cited in its cert petition. The most effective example of this can be found in the defense's citation to Skakel v. Comm’r of Corr., 188 A.3d 1 (Conn. 2018). In Skakel, defense counsel failed to contact an alibi witness who could have accounted for Michael Skakel's whereabouts until about 11:00pm on October 30, 1975. And, while "the autopsy report did not rule out the possibility that the victim was alive as late as 5:30 a.m. on October 31, 1975," the State argued that the victim was killed between 9:30 and 10:00pm on October 30th.

After the alibi witness testified on appeal, the State claimed that the defense could not prove prejudice because the jury could have found that the victim died after 11:00pm.

The Supreme Court of Connecticut disagreed, concluding that

for more than twenty years, that was the state's own theory of when the crime was committed, and no evidence has ever surfaced to undermine that theory. In light of the convincing evidence supporting the theory that the victim was murdered between 9:30 and 10 p.m. and the complete absence of evidence that she was alive but otherwise unseen after that time frame, there is little wonder that neither the state nor the respondent has ever articulated a plausible theory to support the possibility that she was murdered after 11 p.m. Accordingly, the respondent's attempt to negate the significance of the alibi under a partial alibi theory is unavailing.

Of course, nearly the exact same thing happened in the Adnan Syed case. After almost two decades of claiming that Hae Min Lee was killed before 2:36pm, the State attempted to claim that Asia was a "partial alibi" because the State could have shifted its theory of the case to make the 3:15pm call (and not the 2:36pm call) on Adnan's call log the "come and get me" call. Notably, Judge Welch found that this new timeline didn't work based upon the totality of the evidence presented by the State at trial: 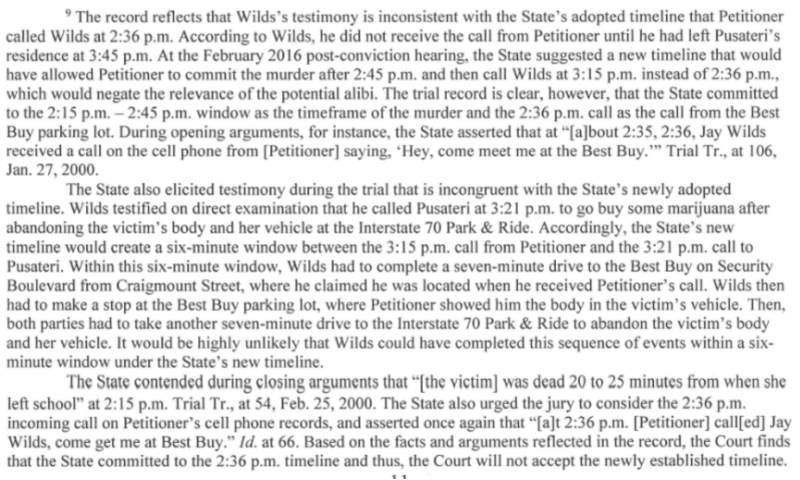 As the defense's Reply Brief notes, such reasoning could have changed the result in Skakel because the jury theoretically could have disbelieved the State's theory that the victim's was dead by 10:00pm and believed that Skakel had the opportunity to kill her after 11:00pm. And that's the point. The opinion of the Court of Appeals of Maryland in the Adnan Syed case is directly contrary to the holdings of ten state and federal courts across the country.

This seems like an especially effective argument...and yet the odds are still stacked against the Supreme Court granting cert. We should find out in the next several weeks whether Adnan's team can buck those odds.

Thanks for this, Colin. I read the brief (*I'm not a lawyer or anyone with legal training), and knew I needed to come to your blog to have it make sense.

Agree on grounds prejudice caused by concealment of evidence is abuse of due process and an insult to The Declaration of Independece, The U S Constitution and The 1948 Universal Declaration oF Human Rights baring torture through fals imprisonment. Keith

I’m going out on a limb here and say they will grant cert, particularly since the MD Court stands alone in their interpretation of the Court’s opinion in Strickland, Here’s hoping 😊

Both sides submitted particularly excellent briefs. Justices' Conference will be held on November 22 with decision on petition on the 25th. The Supremes will not grant cert.

Why doesn't the fact that she didn't pick up her cousins at 3:00 pm get more attention? The state mentions it in their Brief in Opposition (p.9).

Doesn't that mean Lee was almost certainly killed before 3:00 pm?

If Asia McClain's alibi is correct and Syed was at the library until 2:40 pm, the state needs a theory that brings Syed and Lee together between 2:40 and 3:00 pm. They can't just say she was killed later that day (e.g., between 3:15 and 3:45 pm as the state now hypothesizes).

So the jury wouldn't only have to have disbelieved the state's case, they would have to have believed that Syed and Lee somehow met between 2:40 and 3:00 pm. The state has no evidence whatsoever that brings Syed and Lee together in that narrow time window. That means so Syed was likely prejudiced.

RBG would vote to grant cert too I bet...