In Martin, Anthony Martin was convicted of armed robbery and criminal conspiracy in connection with the robbery of a branch of Bank of America on West Martin Town Road in North Augusta, South Carolina, at 12:20 p.m. on April 23, 2009. Martin was convicted based upon the testimony of THREE alleged co-defendants. After he was convicted, Martin appealed, claiming that he received the ineffective assistance of counsel because, while defense counsel called his mother, he failed to elicit alibi testimony from her. Martin supported his claim with a note in the defense file indicating that his mother told trial counsel that she dropped Martin off "around 11:15, 11:30[am]" on April 23, 2009 at a bus stop in Atlanta.

Given this screen shot from Google Maps Docs, you can see why this would have been an alibi: 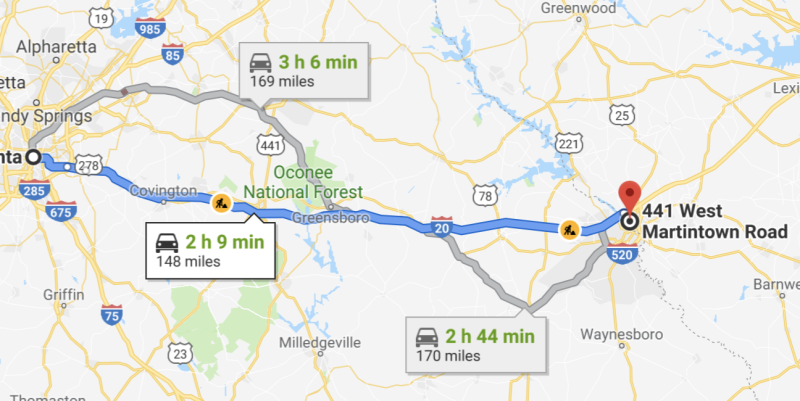 Based on this, you can easily see how the Supreme Court of South Carolina found deficient performance based on failing to elicit this alibi testimony at trial.

But what about prejudice given that three alleged co-defendants testified against Martin? According to the court,

In some cases, there is "'overwhelming' [evidence] such that it categorically precludes a finding of prejudice.”  Smalls v. State, 422 S.C. 174, 190–91, 810 S.E.2d 836, 844–45 (2018) [note" not an alibi case]. However, “the evidence must include something conclusive, such as a confession, DNA evidence demonstrating guilt, or a combination of physical and corroborating evidence so strong that the Strickland standard of 'a reasonable probability the factfinder would have had a reasonable doubt' cannot possibly be met."...Additionally, the strength of the State's evidence should be viewed in light of trial counsel's errors such that there "is no reasonable possibility [counsel's errors] contributed in any way to [the applicant's] convictions."...

The State resists a finding of prejudice on the basis of overwhelming evidence of guilt, a position we categorically reject. The evidence against Petitioner was far from overwhelming....The only people who placed Petitioner at the robbery were the three codefendants, two of whom conceded they testified in hopes of a favorable deal with the State and two of whom admitted lying to law enforcement during the investigation in an effort to exonerate themselves and their codefendants. Further, the three codefendants all claimed to be good friends with one another, but they hardly knew Petitioner. Additionally, the forensics team was unable to find anything of evidentiary value connecting Petitioner to the crime....

Therefore, we conclude counsel's failure to present the known and available alibi evidence—the specific drop-off time in Atlanta—undermined confidence in the outcome of Petitioner's trial.