My First Post on the Amendment to Federal Rule of Evidence 807, the Residual Hearsay Exception

But, under a proposed amendment that would take effect in December 2019, Rule 807 would look meaningfully different.

Under the proposed amendment, Rule 807 would now read: 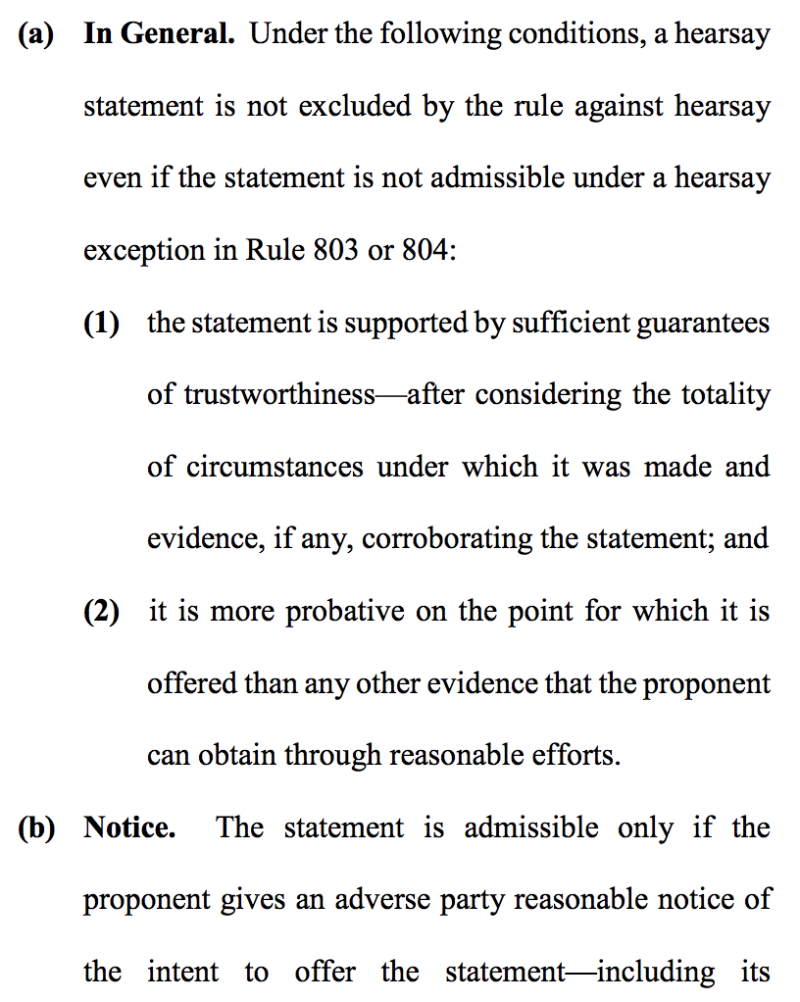 This amended Rule is different from the current rule in a number of ways, and I will break each of them down in a series of posts. Let's start with the first change, which that Rule 807 would no longer require the proponent to establish that the hearsay statement at issue has equivalent circumstantial guarantees of trustworthiness to a statement that would be admitted under Rule 803 or Rule 804. As the Advisory Committee explains:

The requirement that the court find trustworthiness “equivalent” to the circumstantial guarantees in the Rule 803 and 804 exceptions is exceedingly difficult to apply, because there is no unitary standard of trustworthiness in the Rule 803 and 804 exceptions. Statements falling within the Rule 804 exceptions are not as reliable as those admissible under Rule 803 and yet both sets are considered possible points of comparison for any statement offered as residual hearsay. And the bases of reliability differ from exception to exception. Moreover, one of the exceptions subject to “equivalence” review --- Rule 804(b)(6) forfeiture --- is not based on reliability at all. “Equivalence” thus does little or nothing to guide a court’s discretion. Given the difficulty and disutility of the “equivalence” standard, the Committee determined that a better, more user-friendly approach is simply to require the judge to find whether the statement is supported by sufficient guarantees of trustworthiness.

So, constructively, what does this mean?

Old Rule 807: If Defendant wants to offer Neighbor's alibi/hearsay statement under Rule 807, he would have to establish that it contains equivalent circumstantial guarantees of trustworthiness to a statement that qualify for admission under Rule 803 or Rule 804. For instance, he might claim that Neighbor's statement has similar reliability to a statement that would be admissible under the present sense impression exception (Rule 801(1)) or the recorded recollection exception (Rule 803(5)). If the court agreed, the alibi hearsay statement might be admissible under Rule 807. But, if the court disagreed, the statement would be inadmissible, even if the court thought it were really reliable (just not as reliable as a present sense impression or recorded recollection.

New Rule 807: If Defendant wants to offer Neighbor's alibi/hearsay statement under Rule 807, the court looks at reliability without reference to other hearsay exceptions. Is Neighbor's statement reliable enough because it was made within 15 hours of the crime/alibi and well recorded (but not verbatim) in the officer's notes? Maybe and maybe not, but the court now makes this decision in a vacuum without comparing the statement to, say, a present sense impression (might while or immediately observing an event/condition).