Federal Rule of Evidence 610 states that

Evidence of a witness’s religious beliefs or opinions is not admissible to attack or support the witness’s credibility.

In Acosta, "[a] jury convicted Luis Morales-Montanez and Jessica Acosta of possession with intent to distribute 500 grams or more of methamphetamine." At trial, the prosecutor asked Morales-Montanez about his worship of a Jesus Malverde statue. 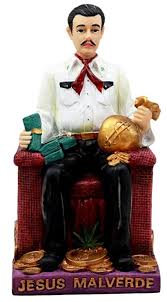 That questioning went as follows:

Q. You said that—that idol that you worship there is an idol that drug traffickers worship, correct?

Q. And you would say prayers for protection, right?

Q. Pr[a]yers from the police so they don’t get to follow you around, right?

Q. Did you say a little prayer before you walked into the courtroom today to your patron saint?

Q. Yeah. Did you pray to that idol?

A. I prayed to the man upstairs.

Q. Uh-huh. But you didn’t, like, pray to the drug trafficker’s god that maybe the jury would believe me, right?

A. I don’t consider myself Catholic, I’m just a Catholic believer.

Q. Catholic believer? Do you understand that there is a Commandment that says thou shall not have any god before me?

A. Yes, I understand.

Q. But yet you prayed to the idol for drug traffickers for protection?

Later, during closing arguments, the prosecutor told the jury:

Another shocking thing yesterday was the defendant, Mr. Morales’ [sic] testimony. Thou shall not have any Gods before me. I’ve never ever seen a defendant admit to worshiping Malverde. I’m not going to call it a saint, I’m going to use the word and call it a deity. He worships a deity . . . . He prayed for protection from police. He prays that he doesn’t get caught.

For whatever religious or philosophical reasons, he’s still trying to push away from Apartment 172. I wonder how many prayers he has said to Malverde before he walked into the courtroom yesterday. I wonder if what’s going through his mind this morning was, I’m going to say another prayer for protection from the jurors of Central Kentucky.

Luis Morales [sic], the worshiper of a deity of a drug trafficking entity who prays for protection from police, prosecutors, court systems and juries. Is he entitled to any credibility for what he said? No, not at all.

On appeal, the Sixth Circuit found that this behavior clearly violated Rule 610, concluding that

Here, the prosecutor did more than “briefly highlight[] [Morales-Montanez’s] testimony” with respect to Malverde, as the government argues; he also elicited testimony on Morales-Montanez’s Catholic beliefs and then implied that Morales-Montanez was violating a biblical Commandment. United States Br. at 16. Under Federal Rule of Evidence 610, “[e]vidence of a witness’s religious beliefs or opinions is not admissible to attack or support the witness’s credibility.” By the same token, credibility arguments based on religious affiliations or practices are not favored. Cf. United States v. Rogers, 556 F.3d 1130, 1141 (10th Cir. 2009) (citing Rule 610 and assuming without deciding that a closing-argument reference to a government witness’s having worn a cross was improper).

Based on this and other errors, the Sixth Circuit granted a new trial

When I see these prosecutors discuss a defendant's religion, I always have to wonder if they practice a religion themselves. They always seem shocked that a teenager might not follow all of a religion's rules, that an adult may make compromises between what their religion says and what they need, or that the folk aspects of a religion may not be completely consistent with a religious scholar's understanding.