Today, the Court of Appeals of Maryland denied the defense's  Motion for Reconsideration in the Adnan Syed case today: 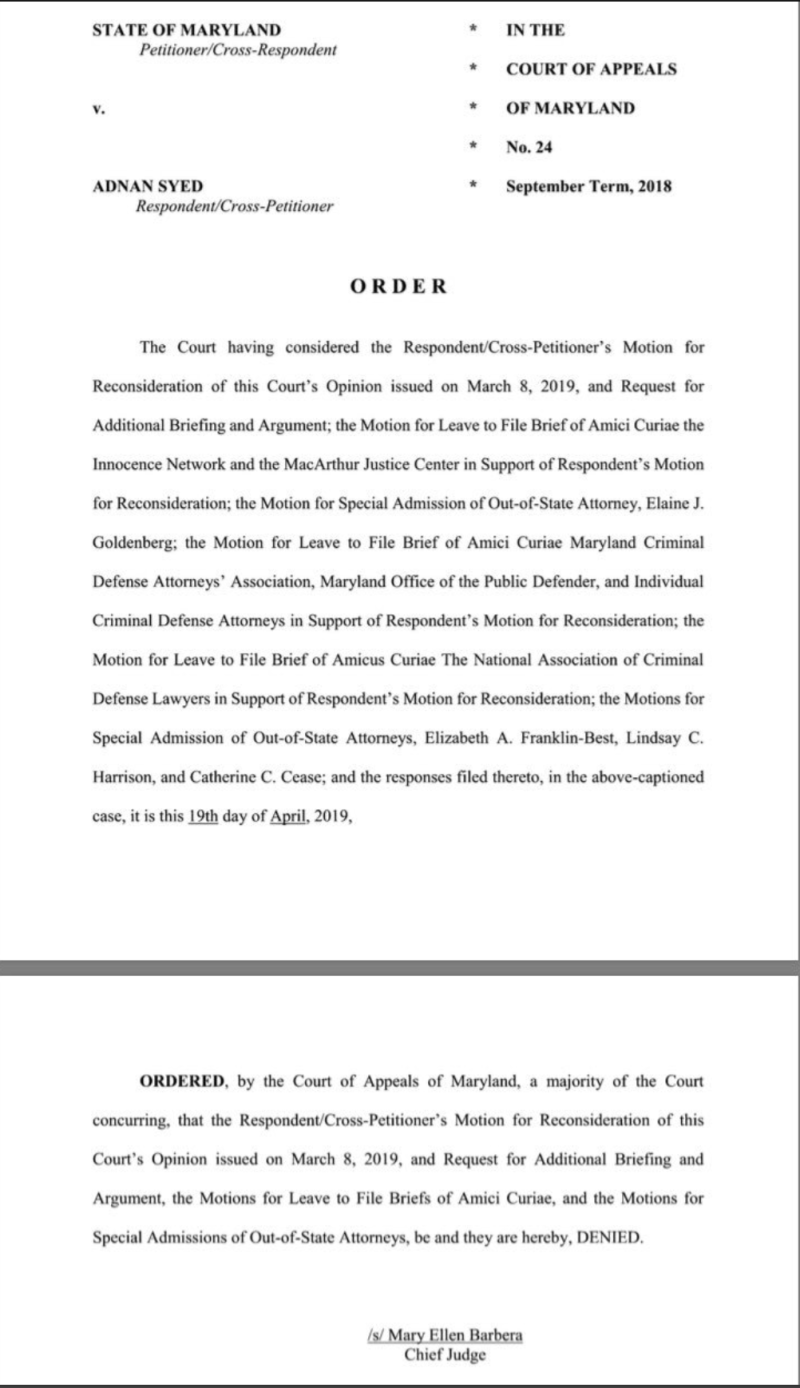 This was not surprising. As I've noted, even though the Motion made compelling arguments, the Court of Appeals was under no obligation to consider them...and Adnan needed two justices who ruled against him to agree to reconsider their decision.

So, what's next? The defense has 90 days to file a petition for writ of certiorari with the United States Supreme Court. It takes four of the nine Justices for certiorari to be granted, and the odds are again stacked against the defense: "Of the 7,000 to 8,000 cert petitions filed each term, the court grants certiorari and hears oral argument in only about 80."

That said, there is some precedent for the Supreme Court granting cert in an ineffective assistance of counsel case out of Maryland, and it's actually a case that's been used in the Adnan Syed case: Maryland v. Kulbicki.

A state ruling that alibis don't matter seems to me like something the Supreme Court should be very interested in looking at.

I want to see someone argue that Strickland's second prong is unconstitutional. It's an incarceration "I win" card. No legal basis needed.

Hi Colin,
Is this an opportunity for the new evidence and information that's been discovered to be included in the writ to the Supreme Court? And what would be the time frame after the writ is submitted to SC for them to respond?

Thanks so much,
Courtney

Thank you, as always for quickly posting an update so that we can understand!
Justin has said that he will take this to the Supreme Court of the US. Do you know the timing of this? If for example, he files within 60 days, typically how long does it take to hear back and then present the case? Also, is the SCOTUS the last chance? What are some other options? Also, why is Adnan not pursing the ineffective post conviction council angle when it seems this is a sure win?

So is the Supreme Court his last hope?

Disappointing for sure. I hope the court’s inability to see their own “technical difficulties” works against them.

Well, this sucks, to put it mildly and to keep the blog safe for children. Should the Supreme Court choose not to listen to the case, is there anything that can be done next?

Once Justin petitions SCOTUS in mid-July -- would it help Adnan for respectful supporters from all over the USA to send brief, well-reasoned letters to the Court urging them to grant a hearing?

Prof. Miller.... that’s it from them?! No further explanation, just...DENIED.

Why have reconsideration if it will not be considered? This is infuriating.

I read the Maryland v. Kulbicki opinion and I can't see the parallel in Adnan's case for its use. Correct me if I'm wrong, but doesn't the Kulbicki opinion by SCOTUS state that the Maryland Court of Appeals incorrectly vacated Kilbicki's conviction on the IAC issue? SCOTUS specifically stated that "[t]he Court of Appeals demanded something close to 'perfect advocacy'—far more than the 'reasonable competence' the right to counsel guarantees," citing Yarborough v. Gentry. I'm all confused!

I agree with previous comment that strickland second prong is ridiculous. Judges speculating on what might or might not have happened. Disgusting. Also didn't at least one judge imply that Asia was lying? That just seems like libel to me.

Colin, is your bombshell enough to prove actual innocence? From where I sit, I think it is time to take the gloves off.

Excellent post from Michael. What can we do now?

I second the bombshell post. Have we been told what this is yet?

Sean -- If the bombshell exists and could prove actual innocence, they would have disclosed it by now. If you're being sarcastic, my hat is off to you, sir!

Courtney: No new evidence can be presented to the Supreme Court.

Aysha: The whole process should only take a few months. If the appeal to SCOTUS fails, there are a few options, including a federal habeas petition and a claim of ineffective assistance of postconviction counsel.

Dr. Nara: No, there are a few other options.

Lisa: Yes, there are a few options.

Michael: Amicus briefs would be the major thing.

Jon: You’re right that it’s the opposite result, but it shows that SCOTUS does sometimes take IAC appeals.

Cathy: I think there should be some version of the second prong, but it shouldn’t be the version applied by the Court of Appeals.

Are you serious? Really serious? So you really think after sitting on the DNA testing having been tested and it having it show no trace of Adnan’s, allst while his most dogmatic online detractors were claiming up and down the entire internet that “Adnan doesn’t want to test the DNA because he knows it will show he is guilty. That’s why the innocence project stopped working with him. He refused to let them test the DNA and so they quietly left. I have no information or reason whatsoever to think or say this, but I am going to irresponsibly assert it as fact because I have no moral compass whatsoever.” (aCK! Never mind they never said that last sentence. That’s just the subtext. Sorry, gosh I wonder where I learned that from?)

Oh, and my personal favorite of your particular flavor of juriis bullshitis legal factoids that you argued here, on this blog, in earnest, that “The state aren’t allowed legally to test the DNA evidence by themselves, duh. Because they can’t destroy evidence, and by testing the DNA, it would destroy the evidence in the process. Nope, only Adnan’s defense team and then alone are allowed to test that DNA, and since they clearly are afraid to do so, that shows he is definitely guilty.”

— I gotta say, hearing someone be so arrogantly confident about something that is so plainly assbackwardsly false, is really quite incredible. Where did that legal opinion come from? Was it never-passed-the-bar-xtrialatty? Or was that your own original legalsplaining? — ah who knows. Alas, I digress...

So if you really think that if the defense had some legally valuable bombshells, that they wouldn’t be holding onto it in order to reveal it at the most strategic possible moment, instead that they’d have posted the information on reddit in order to pointlessly attempt to appease the literally dozens of you epistemologically disingenuous Reddit trolls, then... you sir really aren’t paying much attention are you. That, or maybe you just don’t do the whole modus tollens/modus ponens logic very well.

I don't want to discuss whether he is guilty, just remember that it should take an incredible amount of evidence to grant a new trail for a case that is around 20 years old