In yesterday's post, I noted that three amici curiae ("friends of the court") briefs were filed in support of the Motion for Reconsideration in the Adnan Syed case. In this post, I will summarize the argument made in the amici curiae brief submitted by the National Association of Criminal Defense Lawyers (NACDL).

In its brief, the NACDL primarily accomplishes two things.

Like the Motion for Reconsideration and the amici brief I discussed in yesterday's post, the NACDL brief places heavy emphasis on the 2018 opinion of the Supreme Court of Connecticut in Skakel v. Commissioner of Correction, 2018 WL 2104577 (Ct. 2018), which noted "that our research has not revealed a single case, and the respondent has cited none, in which the failure to present the testimony of a credible, noncumulative, independent alibi witness was determined not to have prejudiced a petitioner under Strickland’s second prong."

As its brief notes, the NACDL decided to check the Skakel court's math: 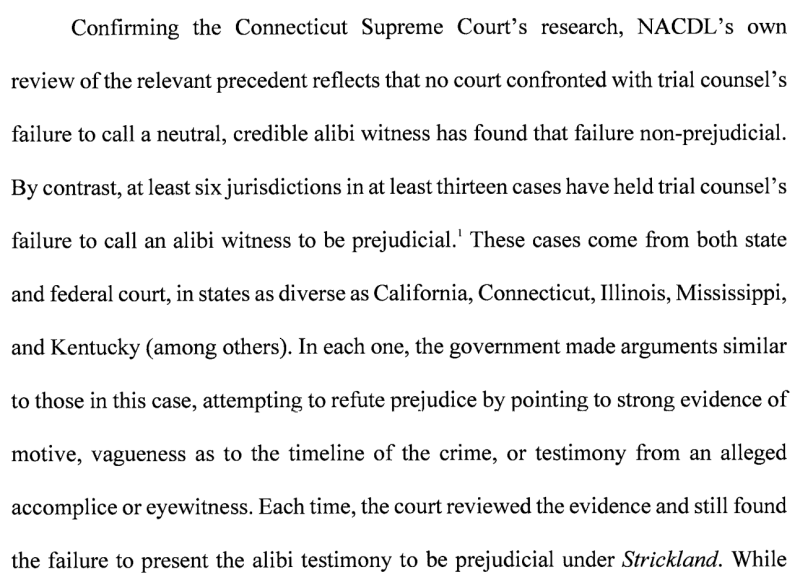 Specifically, the NACDL's brief notes how four different factual scenarios across these cases have not led a single court to find lack of prejudice in failing to contact such an alibi witness:

1. cases in which there was a very strong motive for the defendant to commit the crime;

2. cases in which the alibi witnesses was vague about when (s)he saw the defendant in relation to the crime;

3. cases in which the defendant's alleged accomplice testified against him; and

4. cases in which the victim or another eyewitness identified the defendant.

From this, the NACDL argues that the Court of Appeals of Maryland in Adnan's case has been presented with nothing new under the sun and should find prejudice for the same reasons that every other court across the country presented with similar (or even worse) facts has found prejudice.

Under the Antiterrorism and Effective Death Penalty Act (AEDPA), a defendant who loses in state court can file a petition for writ of habeas corpus in federal court, claiming that the state court(s) violated "clearly established" law. Before the Court of Appeals's ruling in Adnan's case, several defendants were indeed able to successfully challenge state court denials of ineffective assistance/alibi claims in federal court, such as in Raygoza v. Hulick.

But now, as the NACDL notes, the Court of Appeals's ruling creates a split, with at least one state supreme court ruling that the failure to contact an alibi witness might not be prejudicial. As a result, federal courts could now find that there is not "clearly established" law on failure to contact alibi witnesses. Therefore, the Court of Appeals's decision could have ramifications for defendants across the country. As a result, the NACDL asks the court to reconsider its opinion to prevent this collateral damage