Episode Four of "The Case Against Adnan Syed": Did the Idea of Best Buy Come From the Police?

In Sunday's fourth (and final) episode of HBO's "The Case Against Adnan Syed," it was noted that the HBO team was able to talk with Jay Wilds in January 2019. Among other things, he told them the following:

So, is this statement credible, and, if so, what does it mean?

Let's start at the beginning. During the missing persons investigation, French Teacher Hope Schab prepared questions for Woodlawn High School students to answer, including the following: 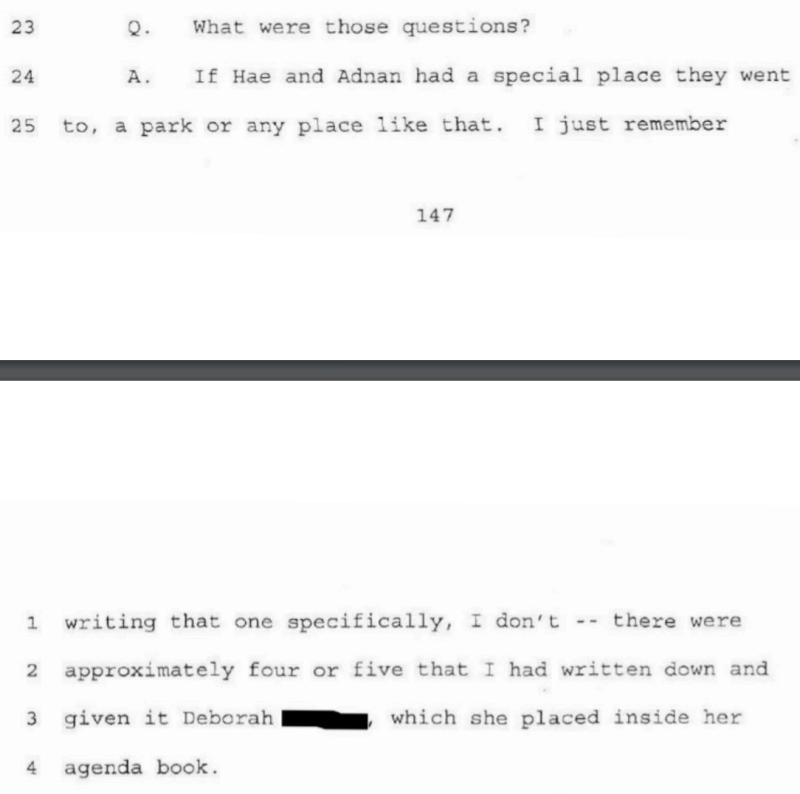 We don't have the answers to those questions, but it's possible that one or more students knew that Hae and Adnan used to park at Best Buy, which would mean that the police had knowledge of this location before Hae's body was discovered on February 9th.

In Jenn's February 27th police interview, she says that Jay told her that Adnan told him he killed Hae in the Best Buy parking lot, with Jay saying he saw Hae's body in the trunk of a car:

In Jay's police interview the next day, he says that the trunk pop occurred at a strip off of Edmondson Avenue:

Subsequently, in his March 15th police interview, Jay says that the murder and trunk pop were both in the Best Buy parking lot: 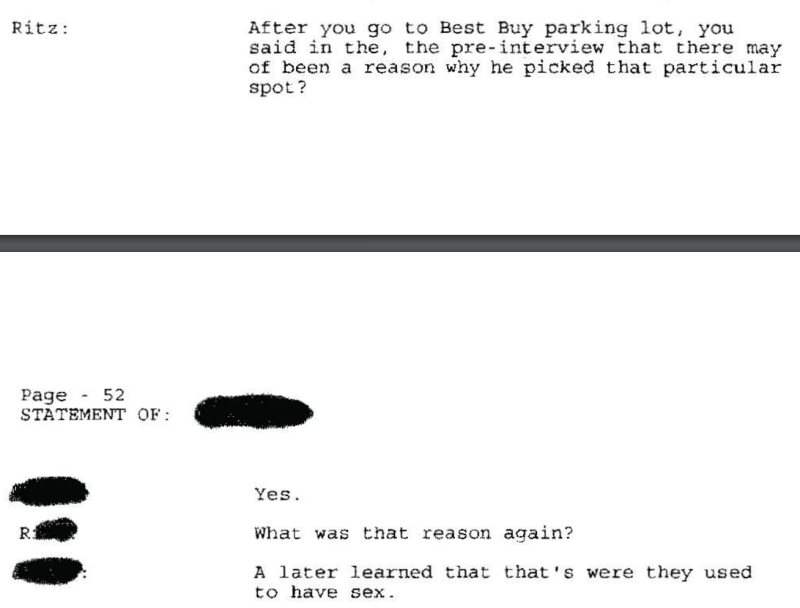 As this answer makes clear, there was clearly some discussion of Best Buy in the unrecorded pre-interview before the tape started rolling.

Jenn basically declined to talk to the Serial team.

Then she added, there was one thing she never believed. She said she never believed the murder happened at Best Buy, because she thought there would have been security footage, and that never came out. I told her it seems like maybe there really weren’t security cameras at Best Buy back then, and she kind of shrugged and said: "Oh well, see, I don’t know."

In his interview with The Intercept, Jay said that he did see Adnan in the Best Buy parking lot, where Adnan told him he killed Hae. But, according to Jay, this is NOT where the trunk pop occurred:

Jay then adds that he learned something later that led him to believe the murder probably didn't happen in the Best Buy parking lot:

There's no follow-up question asking Jay what he learned.

Episode 2 of "The Case Against Adnan Syed"

As noted, in Episode 2 of "The Case Against Adnan Syed," Chris repeats his pool hall trunk pop story. The show then cuts to Jenn, who says something like she thought Jay said it was at Best Buy.

Episode 4 of "The Case Against Adnan Syed"

As noted at the top of this post, Jay told the HBO team in January 2019 that the idea of Best Buy came from the police.

As with so many things that Jay says, who knows whether we can trust him. But if he is now telling the truth...wow. This would mean that the police ostensibly learned about Adnan and Hae "parking" at the Best Buy and then fed that information to Jay and/or Jenn so that it could be included in the murder/trunk pop story to implicate Adnan. It would also mean that, contrary to their claim, the police would have talked to Jay before Jenn...because Jay would have needed to tell Jenn this information before she talked to police.

Now, of course, can we trust Jay? Probably not, but both Jay and Jenn backing off of the Best Buy story in recent years and Jay not including Best Buy in his initial story is interesting.

And, of course, we don't know exactly what Jay told the HBO team due to two party consent law. But the chyron that led this post certainly makes it look the entire idea of Best Buy came from the police.

As with so much in this case, we have yet another intriguing lead...but no definitive answers. Hopefully, we will get some soon.

After watching the doc, I wondered whether it was possible that Jenn did actually meet Jay and Adnan at the mall on the same day as the conference and trip to Kristy’s (NHRC) house, which was not the 13th but after Jay had spoken unofficially to police, maybe around 20th Jan for instance. Therefore, after being dropped off at the mall, when he is alone with Jenn, he says Adnan killed Hae, which lays the groundwork for the whole thing. So Jenn and Kristy are remembering events that happened, but just on a different day. It’s quite the conspiracy but it would explain Jenn & Kristy having memories of events occurring on the same day but they put it at 13th as this is what the police tell them. If the police had knowledge of Best Buy being a place where Hae and Adnan would go, they could have mentioned Best Buy to Jay, who in turn used it in his story to Jenn. Maybe he forgets about it in the official first interview, but is reminded of it by the second interview when they have the cell site data.
What do you think?

The amount that Jay changes his story feels incredibly excessive. Is there any legal recourse for trial testimony where the witness constantly changes their story after the fact?

Hey Colin, I had a question for you guys but have no social media :-)
Was listening to the new season about the HBO series and thought. Does anyone know what became of Adnan's cell phone ? I know there is no hope of getting the records for the incoming calls now but if his phone is in evidence or somewhere maybe we could find an old charger and charge it up to see what numbers called it when. Thank you guys for all you have done with this case and all the other cases you guys give hope to those who otherwise would be without it. Keep up the great work !

Great commentary as always. What still always stumps me and questions Adnans innocence is that jay and Jen don’t talk to the police on or off books till almost two weeks after the killing but yet Jen and Chris and neighbor boy still say jay told them adnan killed hey within a week of the murder! I can’t get that out of my head! Jen knee that day.

To Tom's comment. It was disappointing not to see the filmmakers press Jenn on her shovel story. If the story was a lie what would be the implications of her admitting to it at this point?

To me, this is clearly a case of coerced and coached testimony to make an arrest and I imagine the threat of prosecution for selling drugs and pressure from the police is the reason Jay has gone along with the story given to him, What would be the consequences for Jay now if he was to admit this coercion and does he know what that would be? Perhaps he could be allowed to speak freely for the purpose of the case without incrimination and see if there's a more realistic story behind all of this?

Its irrelevant where Best Buy came from. Clearly Jay wants to hide the true location and is quite happy to go along with what the Police suggest. However it makes not one jot of difference to whether Adnan is guilty or innocent.