The DNA Report in the Adnan Syed Case

Yesterday, it was revealed that there was DNA testing done in the Adnan Syed case last year. Specifically, the State tested twelve pieces of evidence that were found on or around Hae Min Lee. Here is the report on that testing by the Forensic Sciences Division of the Baltimore Police Department: 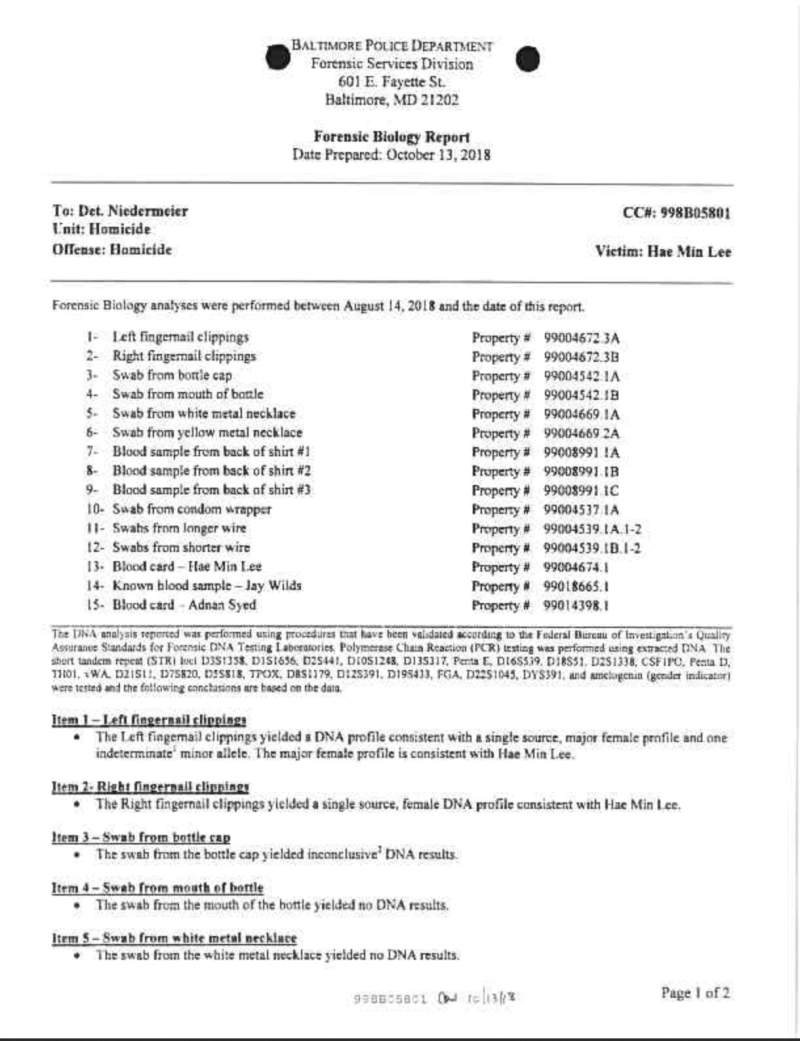 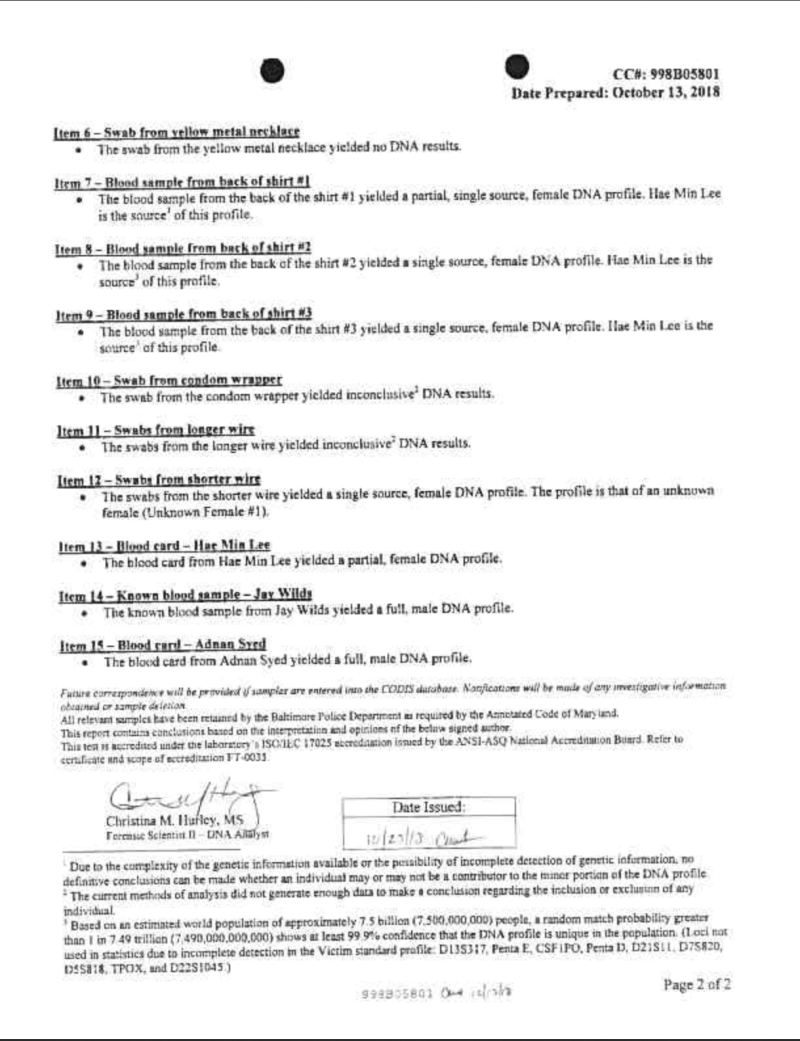 So, what does it all mean?

As we'll discuss on Monday's episode of Undisclosed, the DNA report raised many more questions than it answered. But it does tell us two important things:

While this report refers to the tested evidence as a "shorter wire," its property number makes it look like the Inventory Sheet from February 9, 1999 referred to it as a rope:

That said, the photo of the "longer wire" and "shorter wire" does make them like like wires as opposed to ropes, but who knows? Given that this was a case of apparent manual strangulation (with the hands) as opposed to ligature strangulation (with a rope, cord, etc.), it would not appear that this rope/wire/cord would have been the murder "weapon." That said, it's fairly easy to imagine the rope/wire being (1) something used in some way to transport the body; or (2) something someone involved in the transportation/burial simply left behind.

The possible connection between the rope/wire and Hae is quite obvious, which is in all likelihood why it was tested. The brandy bottle (also tested) and the rope/wire were about eight and five inches away from Hae's body, which was about 127 feet deep in Leakin Park behind some rough terrain. Meanwhile, all of the other evidence collected was roadside.

There's also the fact that they were able to get a DNA profile from the rope/wire almost 20 years later, which makes it likely that it couldn't have been exposed to the elements much longer than Hae's body. This means that the rope/wire was likely deposited during the burial or in the six weeks before her body was discovered (although it's possible that it could have been deposited earlier).

I'm not certain whether the DNA profile has been run through any databases or what else can be done with it. But, if we're able to get a match at some point, it could point us in the direction of the killer, someone who helped the killer with the body, or someone connected to the killer. It's also significant that we have evidence so closed to Hae's body that has a DNA profile that is not a match for Hae or Adnan.

Second, none of the other tested pieces of evidence produced a DNA profile that was a match for Adnan. Such evidence of exclusion is no doubt exculpatory, but how exculpatory is it? On Undisclosed, we covered the case of Ronnie Long, a North Carolina man who has been in prison for 43+ years based upon an alleged burglary and sexual assault. He recently had oral arguments in the Fourth Circuit on his claim that the State committed a Brady violation based on failing to disclose that they had tested about the same number of pieces of crime scene evidence and couldn't find a connection between Long and the crime scene/victim.

The North Carolina courts found that this evidence was exculpatory given the nature of the attack in a confined space and the likelihood that there would have been some forensic evidence tying Long to the crime scene. Of course, given that the State claims that Adnan killed Hae in the close confines of her Nissan Sentra, the same reasoning would apply. But the Supreme Court of North Carolina in the Ronnie Long case split 3-3 (with one judge abstaining) over whether this evidence was material, i.e., likely would have changed the outcome at trial. The federal district court later found lack of materiality, and this is the decision the Fourth Circuit is currently reviewing.

So, yes, evidence of exclusion is exculpatory...but how exculpatory? Should Adnan's case end up in federal court, the opinion in Ronnie Long's case could be controlling authority given that Maryland is in the Fourth Circuit.

So, overall, we have (1) no evidence linking Adnan to the crime/scene body; (2) a rope/wire found five inches from the body that yielded a DNA profile that is a match for some unknown person; and (3) three two hairs recovered from Hae's body that are not the hairs of either Hae or Adnan.

This evidence is exculpatory, but how exculpatory? By itself, it's not enough for an exoneration. But, it could lead to evidence that could produce an exoneration. And it could be used in combination with other evidence such as lividity, Kristi's class schedule, Jay's Interceprt interview, etc. to support a petition for writ of actual innocence in Maryland or to support a Schlup actual innocence gateway claim in federal court (which is how Ronnie Long's case is currently being considered. We'll likely all know more after watching Episode Four of "The Case Against Adnan Syed."

Note that Unknown Female #1 might be the Forensic Scientist who analyzed the samples. Re databases: the small print says “correspondence will be provided if samples are entered into the CODIS database” and that “notifications will be made.” So the unknown profile may have been entered into the database?

Seems like if there was a struggle in the vehicle, between Hae and anyone, there'd be DNA from that unknown person, too.

I don't see any swabs taken from the trunk of Hae's vehicle, is that right? They completed ignored that?

Is there any way to get the DNA data uploaded to GedMatch, the open source DNA database?

How is it not SOP to automatically submit the results to CODIS, GedMatch, etc.?

Especially to rule out the possibility of contamination by the people collecting / testing the specimens. Should at least b

IN the photo is it the thing that’s twisted like a small pretzel that is one of the wires? I can’t tell.

If the cause of death was manual strangulation, where did the blood come from? Was there other signs of a struggle?

Are the finger nail clippings ones found somewhere or taken from Adnan or Hae and compared?

This reminds me of standard vinyl-coated plastic clothesline. It is sold in 50 and 100’ lengths and is also commonly used in umbrella-type or 4-strand backyard clotheslines. Some versions have wire in the center, some do not. This is easily bendable, but does not form good knots, as it is slippery. It is smaller diameter than regular cotton clothesline.

As for the lack of DNA under Hae’s fingernails - that is another source to disprove the State’s (Jay’s) testimony, that Hae fought back while being strangled and broke the shift or turn signal stick. (I know this was disproved later) If she is being strangled by the killer’s two hands - HER hands would have been free to scratch and claw at her attacker, therefore collecting the killer’s DNA. https://www.amazon.com/gp/product/B000F5OBHS?pf_rd_p=1cac67ce-697a-47be-b2f5-9ae91aab54f2&pf_rd_r=A5727HGNKNG3GW1EMK87

Is there anything more that TrueAllele/Cybergenetics could offer in the DNA analysis, maybe for the incomplete unknown female sample?

How did the actual killer prevent leaving their DNA on Hae?

You can find all of the police notes here.

I'm also super curious about submitting Unknown Female #1's DNA to a genealogy database like GedMatch... is it possible that we could get that done? There's so much data out there now we might be able to narrow down who Unknown Female #1 might be.

Hey Seamus where are your pompous comments about how Adnan and his defense team were too scared to test the DNA? Your snark is conspiciously absent from this thread.

The first thing I would do with the DNA sample is have it tested for familial DNA profiles to see if it matches anyone in Hae's direct family. This is at least something that could be done immediately without the need to have other DNA profiles available.

"How did the actual killer prevent leaving their DNA on Hae?"

Curios to know if Maryland does not allow the match of DNA to genealogy sites due to privacy rights if the defense can still attempt the match to argue for an appeal with Supreme Court? As this is not a Federal law it could be argued that the State is preventing the inclusion of evidence that could overturn a wrongful conviction.

Isn’t it still possible to get DNA from Don and Alfonzo to match.

The DNA profile on the shorter wire of an unknown female is very curious. My mind ran to a profile for an assailant but looking at the wire, the not and the way it is insulated, I wonder if it is not the profile of another Jane Doe? Also, what is the white object at the bottom of the wire that looks like a food carton?

The knot in the cord-wire is interesting. It's not a common 'Granny knot' that most of us would use to tie something up. It's a 'Reef Knot'.