While the Court of Appeals Ruled Against Adnan Syed, It Also Revealed That the Maryland Courts Have No Confidence in His Trial or Conviction

On one level, today's 4-3 ruling by the Court of Appeals of Maryland in the Adnan Syed case is devastating...because it means that Adnan does not get a new trial...for now. But when we review what the Maryland courts have ruled in his postconviction proceeding, a pretty extraordinary picture emerges.

To prove ineffective assistance of counsel, a defendant must establish both (1) deficient performance; and (2) prejudice.

To demonstrate deficient performance, appellant must prove “that his counsel's acts or omissions were the result of unreasonable professional judgment and that counsel's performance, given all the circumstances, fell below an objective standard of reasonableness considering prevailing professional norms.”...With the benefit of hindsight, however, it is all too easy to mistake a sound but unsuccessful strategy for incompetency, and for this reason we “indulge a strong presumption that counsel's conduct falls within the wide range of reasonable professional assistance.”...It is thus appellant's burden to overcome the dual presumptions that the allegedly deficient act or omission was the result of trial strategy and that the strategy was a sound one. Cirincione v. State, 705 A.2d 96 (Md.App. 1998)

In regard to the second, “prejudice” prong, “[t]he defendant must show that there is a reasonable probability that, but for counsel's unprofessional errors, the result of the proceeding would have been different. A reasonableprobability is a probability sufficient to undermine confidence in the outcome.” Shortall v. State, 183 A.3d 820 (Md.App. 2018) (quoting Strickland v. Washington).

Now, this is where we get the big disagreement among the Maryland judges. In his opinion Judge Welch found that the State presented a weak/contradictory timeline of the murder and that many of the cell tower records contradicted the testimony by Jay Wilds. This led him to conclude that the "crux" of the State's case was the Leakin Park pings: 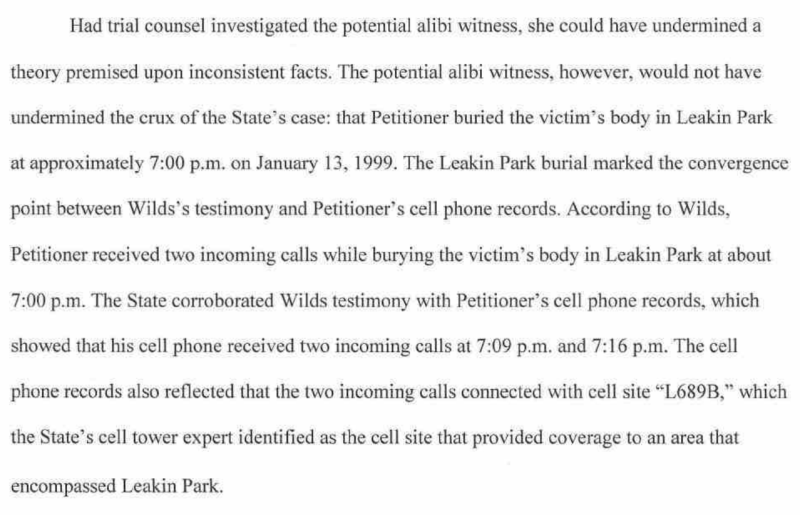 Of course, a majority of the Court of Appeals of Maryland disagreed in its opinion, finding that the "crux" of the State's case was the murder and not the Leakin Park pings: 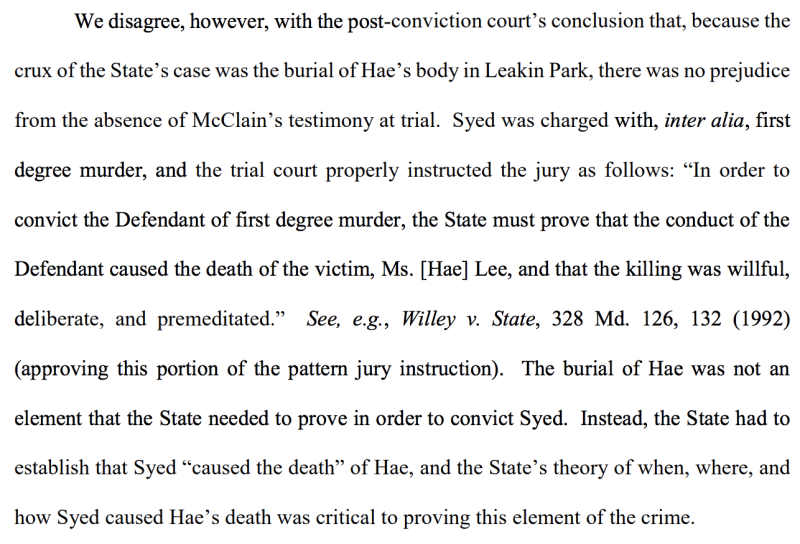 Finally, today, the four judge majority of the Court of Appeals of Maryland agreed with Judge Welch that the Leakin Park pings were the "crux" of the State's case against Adnan: 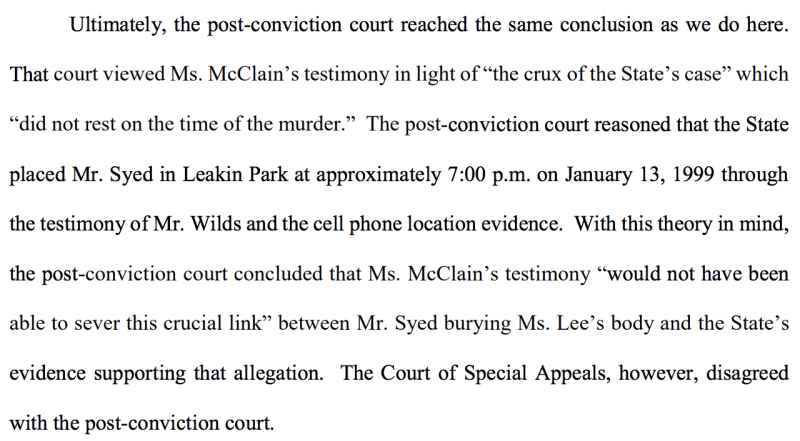 This led the court to reach the same conclusion as Judge Welch with regard to prejudice: because the Leakin Park pings were the "crux" of the State's case against Adnan, the failure to contact Asia McClain could not be prejudicial. Finally, like the Court of Special Appeals, the Court of Appeals found the cell tower claim waived.

In other words, Adnan was failed at least twice at trial, and those failures went to both of the aspects of the State's case that could be considered the "crux." And the only reason Adnan is not getting a new trial...now...is that the Court of Appeals has concluded that he was failed again on appeal, which led to waiver of his cell tower claim.

And, as I noted earlier today, this is why Adnan still has a great shot at relief...eventually. Today's opinion was all about giving deference to Judge Welch with regard to his substantive findings on the alibi claim, which were that Adnan was not prejudiced because the Leakin Park pings were the "crux" of the State's case. Seemingly, this would mean that the Court of Appeals would give great deference to Judge Welch on his substantive findings on the cell tower claim. Simply put, if the Court of Appeals agrees that the Leakin Park pings are the "crux" of the State's case, how could the failure to use the AT&T disclaimer not be prejudicial.

Now, all Adnan needs is a way to get his cell tower claim back before the court. And, as I noted earlier, I think he has such a way. The State might have won the battle today, but I think the defense still wins the war. Stay tuned.

"We must accept finite disappointment, but never lose infinite hope!" I'm so grateful to see this optimistic and hopeful evaluation of things! Maybe you guys can do an addendum for Undisclosed next week and talk through the possible options for relief in light of today's ruling. #FreeAdnan

Unbelievable. And a day after Manafort's sentencing. One really wonders, do the four justices in the majority really believe this? What is really happening here? Not justice, a respect for the truth, or, really, process. Perhaps, eventually, forcing a bogus plea by another innocent man? Sort of a PR coverup and confusing the issues of corrupt police investigative practices and judicial malfeasance in turn-of-the century Baltimore? I don't know; and Colin, don't hesitate to take this down if my intemperate remarks might harm Adnan's case even indirectly. But I feel complete contempt, in the colloquial sense. This nonsense just breeds conspiracy theories, left, right, center.

Your comment about being found deficient on 2 different issues reminded me that Adnan also made a cumulative prejudice claim that went nowhere because COA ruled that the cell tower issue was waived.

But that possibility comes back into play if Adnan can get Welch's finding of deficient performance on the cell tower claim upheld, right?

Also, if COA relied on an alternate timeline, did it have to ignore a factual finding by Judge Welch to do so?

All this proves is that humans who have no sense of reason get elevated to high court. And become law school professors. A simple reason for no contact: she knew it was false. As the wise soul once wrote, an alibi refuted in open court is worse than having no defense at all. He otherwise wrote, I'm going to kill. Pity that he got taken at his word. But at least Asia got a book out of the thing. This gal has the thing just about right:

When I listened to Ritz on the latest episode of Undisclosed, I was struck by how much he sounded like a decent guy, unable to comprehend Jenn’s callous reaction to Hae’s death and Adnan’s plan to kill her. He had the same disbelieving reaction to Jay in episode one of Serial, asking him why he didn’t try to stop Adnan. Where you, Rabia, hear taps and rustling papers and conspiratorial corruption, I hear veteran homicide cops blown away by the casual cruelty and immorality of these kids. Imran’s awful email was yet another example. Hae’s life meant so little to Jay, Jenn and Imran. And to Adnan, who actually killed her.

Lastly, and by the way, it's over. But if you want a retrial, fine, I'll put on the suit once again and have but the one prop for closing. His, I'm going to kill, as half the board, with the other half a picture of her dead body. Have fun with that.

Okay, maybe two items. That board and this:

Because he knew she was dead. And speak with the people who know what strangulation means, psychologically. Adnan is just where he belongs.

Janelle: This is far from over, and a lot of yesterday’s opinion will be really helpful with regard to the cell tower claim.

Hal: It’s always tough to speculate what judges were thinking, but I don’t see this as PR.

Paul: There are currently some pretty damning allegations against Detective Ritz, and they aren’t the first: https://www.baltimoresun.com/news/maryland/crime/bs-md-malcolm-bryant-lawsuit-20190215-story.html

“Now, all Adnan needs is a way to get his cell tower claim back before the court. ”
I don’t understand this Avenue. Can Justin file a new PCR motion or what is this way? I couldn’t follow the link you provided to another case.

So, if I am not mistaken, Justin and his team have decided to try and get Adnan's verdict overthrown on - for lack of a better word - technical issues. Neither if which really deal with Adnan's guilt or innocence and that can be debated endlessly it seems. What's the reason for not arguing the lividity issue? This clearly shows that Adnan's innocent, at least according to the state's version of events. Is that such a completely different avenue - legally - that it would be counter productive to go down both at the same time?

Sebastian Borg: I would disagree with the “technical issues” characterization. Beyond that, though, the Court of Special Appeals remanded with regard to the alibi issue. That was arguably the only issue that the defense counsel raise, but the defense tried to add the cell tower claim under the theory that the State tried to shift the 2:36pm “come and get me” call to a 3:15pm “come and get me” call. That worked for Judge Welch, but both of the higher courts found waiver. There really wasn’t a plausible way to add the lividity claim in the current appeal. It might, though, be added for a subsequent appeal.

Colin... you sir, belong on a bench. Would you accept a judicial nomination? Not that I'm in a position to offer one.

What about the “only one bite at the apple” thing? Can the defense even bring an additional claim based on dna testing?

Or an ineffective assistance of post conviction counsel for letting the pings fax sheet get waived by not noticing it? Wouldn’t that be a second bite at the Apple?

I had thought that waiver had to be "knowing". It is blatantly obvious tht the cover sheet was not "knowing" for the defense until Susan Simpson. A point judge Welch seems to have made.

Dan: Happy being a professor.

Paul: A DNA petition is allowed in addition to the one petition postconviction relief. A motion to reopen can be based on a claim of ineffective assistance of postconviction counsel.

I've never understood the philosophy that Adnan is guilty because he didn't call Hae after she was missing. She was missing. She wasn't answering the phone for her family or her best friends, and she was Adnan's ex-girlfriend at the time. Calling a missing ex who isn't answering her phone for anyone closer to her seems like a ridiculous exercise, and it's especially ridiculous to hang guilt or innocence on that.

Colin, a general question, but one that may not be susceptible to a simple answer: There seems to be a mania about "waiver" to the point that people spend years in jail because of circular situations (such as not allowing the cumulative evidence of prejudice from both alibi and related cell phone calls to be considered because one element then the other is thrown out}. Does this derive somewhat from a seeming fixation on finality, perhaps institutionalized in the 1990s, or are we talking about long-standing practice. Obviously elements of trials have always been waived to move things along when both sides agree to the general facts.

The title to this post really struck me. It summarizes quite a bit of what's wrong with the criminal justice system. When 'The Law' perverts and/or obstructs justice, it's clear that cart is pulling the horse, and it's pulling it towards its grave.

As an amateur observer of this situation, the failure of Adnan to attempt to call Hae is a very damning fact from a kind of Occam’s razor perspective, but there is a more abstract fact that bothers me more. It is this: that Adnan, upon learning of Jay’s accusations, didn’t make a much more binary and definitive insistence that Jay killed Hae. Confusion about Jay’s motive, the bewilderment Adnan professed about Jsy’s account, rings oddly to me, is not how an innocent person would’ve reacted. Wouldn’t he have in fact reacted by professing certainty Jay was the perpetrator? And yet I’m unaware of any account, including Adnan’s own, that suggests he did.