Episode Two of "The Case Against Adnan Syed": Hae's Car

Part of last night's second episode of HBO's "The Case Against Adnan Syed" focused upon Hae's car. In this post, I will discuss the significance of what was discussed.

Jay's story is that after Adnan and he buried Hae's body in Leakin Park, Adnan and he ditched Hae's car in a grassy area behind row houses in west Baltimore:

Jay claims that Adnan threw the keys to Hae's car in the dumpster that same night, with Jay checking on the location of Hae's car on multiple subsequent occasions, with the latest being February 24th (4 days before Jay's February 28th interview): 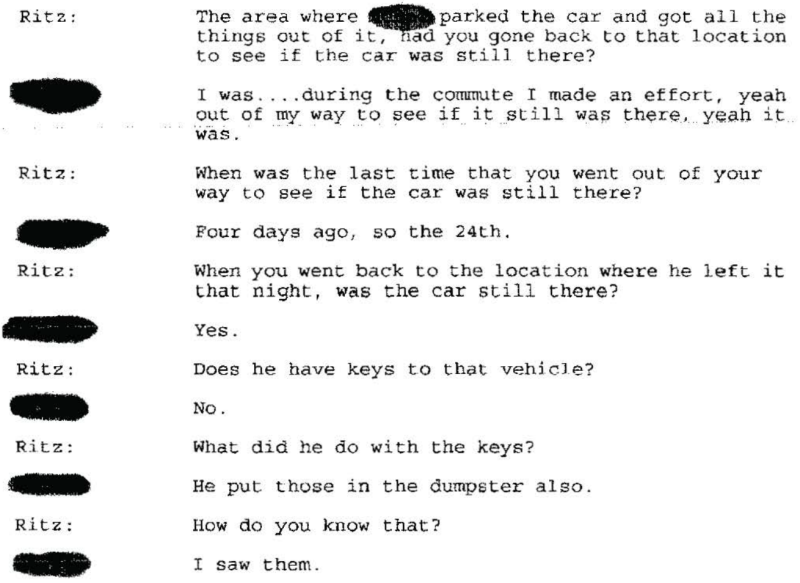 The State's claim is that, on the night of Jay's first police interview, Jay led the police to Hae's car, corroborating his story about (1) Adnan and he ditching the car behind the row houses; (2) Adnan tossing the keys in the dumpster; and (3) Jay confirming that the car was in the same location on multiple occasions.

Here is a drawing by Detective Forrester of the location of the car: 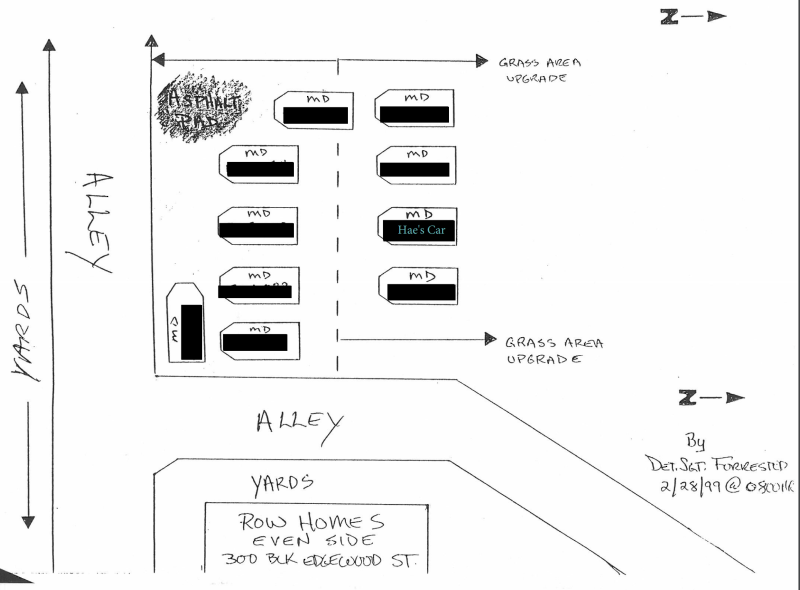 And here is one of the photos of the car before it was moved on the night/morning of Jay's interview: 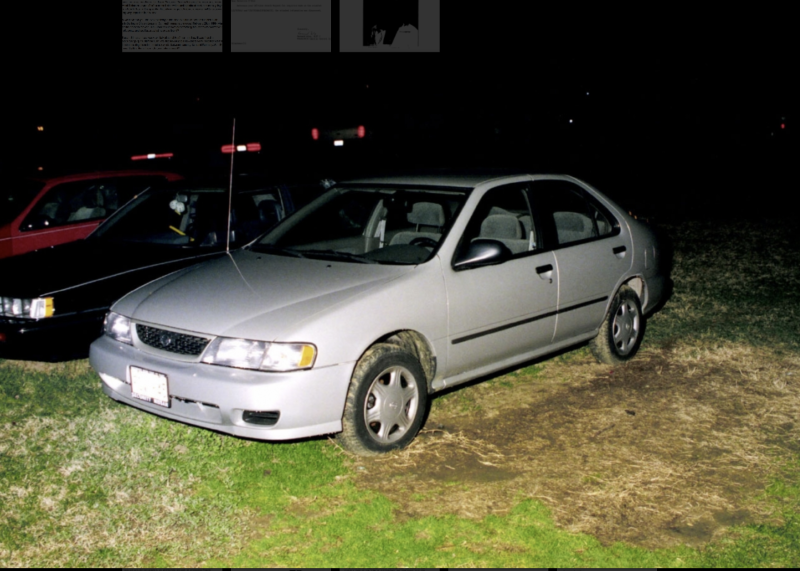 Last night's episode raises two questions about this story. First, two guys from QRI spoke of a resident of one of the row houses since 1973. She was pretty adamant that (1) she and another long term resident (both of whom we might affectionately call busybodies) would have noticed a car sitting in the same spot in the grassy area for six months weeks; and (2) one of them would have called the authorities if the car remained there that long, which would have led the city to tag and toe tow it.

Second, the QRI guys brought in Erik Ervin, PhD, turf physiologist to determine whether the grass would have remained green under a car that sat there for six weeks in January/February (as shown in the photo). Dr. Ervin took a sample of the grass -- perennial rye grass -- with the promise to do an experiment to test this hypothesis. I assume we'll see the results in Episode 3 or 4.

So, let's say that Dr. Ervin's experiment shows that Hae's car couldn't have sat there for six straight weeks. What does that mean? Well, once again, it would mean that Jay's story is fundamentally flawed. Simply put, his whole story about Adnan dumping Hae's car and keys on January 13th and Jay periodically returning to the car thereafter wouldn't hold water. In other words, it would mean that one of the strongest parts of the State's case -- Jay leading the police to Hae's car -- would now be a weakness.

As someone who has mown lawns for a living at times - I can tell you for sure that there was no way in hell that there was short green grass under a car that has been parked in one place for 6 weeks. If it was there for 6 weeks, there would at the very least be 6 weeks worth of growth on it. That’s if it was green (which is a little doubtful)

What are your thoughts on the whole around the Roy Davis possibility?

Photo was taken Feb. 28, so all the grass is newly sprouted - none of the green grass would be very tall. The side of the car we see in the photo is exposed to the morning sun, which could explain the strip of green - that grass could have "greened up" in just a few days of morning sun.

I want to know more about the car that was parked over the brown spot to the right. You can see the same green grass effect on the eastern edge of that car too - but it sure was parked close to Hae's car. You can see where its tires were. If that other car had been there in daylight, it would have blocked the morning sun reaching under Hae's car. I'd want to know if it was removed for a better photo of Hae's car; how long it was parked there, and whether the driver really pulled in so close to Hae's car, or even noticed whether the car was there.

What's your plan to get any of this in front of a court. Adnan knew about these issues no later than early June 2015 when Rabia discussed it on Bob Ruff's podcast. It wasn't raised in the Motion to Reopen PCR in late June 2015 or the Supplement in August 2015. The same thing goes with lividity -- the issue was known no later than early June 2015 when you discussed Hlavaty on Undisclosed, and then it wasn't raised in the June 30, 2015 motion of the August 2015 Supplement. Isn't all of this waived?

Let's not forget the fresh grass in the wheel well. And the fact the car is pretty clean. If my car sits in my carport in Texas for more than a few weeks, out of the direct weather, it's dirtier than that.

"North" isn't even correct in the diagram, it's pointing northwest.

Apologies for using a second comment, but for the green grass sun truthers, the side of Hae's car that we can see is actually facing northeast. In the winter time, the sun rises and sets a bit to the south, about 105 degrees, and stays lower than in the summer time. Combine that with the nearby houses and the giant tree just south of the car, and it seems very unlikely that the grass there would see any sun at all.

I'm assuming we don't have a picture of the spot from right after her car was moved?

CarnotBrown now come on — you know the 1/99 truthers have a rigorous methodology when it comes to dealing with this kind of stuff. One of them (usually xtrialatty for legal stuff, Seamus for nefarious-sounding acccusations of generalized nonspecific document malfeasance, AnnB for (allegedly) regurgitated repacks of something Aitca said (Allegedly! Please don’t threaten litigation against me Ann, I have no money i swear!), and JustWonderin for the kind of explanations that even Area 51 tin foil hat wearing-types find just a wee bit outlandish) comes up with the canonical singular explanation on how to hand-wavingly dismiss whatever inconvenient new fact stands in the way. No room exists there for rebuttal arguments. Nice try though.

So it is becoming somewhat clear Jenn and Jay lied to save their own skin. Now who? Did Don have it in him? His whereabouts are unknown to a degree and he moved on fairly quickly, even putting the make on Debbie. Or someone else completely unrelated to the high school students?

On the off-chance that this hasn't already been explored, what about obtaining satellite images of 300 Edgewood from 1999? The area depicted in the detective's drawing (which by the way, seems to be a mirror image of the actual location) can clearly be seen on Google Earth and past satellite images. I haven't found an image from 1999 yet, but according to the USGS images have been captured of the U.S. for decades. Just one image taken between Jan 13 and Feb 28 could tell us more than we know now about how long Hae's car might have been sitting there. Any experts out there in satellite imagery?
https://pubs.usgs.gov/gip/AerialPhotos_SatImages/aerial.html

Anyone else think it's unlikely for a car that sat for 6 weeks through at least some snow or rain to have such muddy looking tires?

You can actually see the browning of grass under the darker car to the left of Hae's.. too me this would be indicative that the grass would have done the same thing under Hae's car if left for 6 weeks.