On the evening of November 20, 1998, 16-year-old Toni Bullock was fatally stabbed in Baltimore, Maryland. 24 year-old Malcolm Bryant was subsequently convicted of her murder. Thereafter,

In 2009, a petition for DNA testing was filed and in 2011, fingernail clippings taken from Bullock were sent for testing. The testing revealed a partial DNA profile of a male, which had a rare identifier, which Bryant did not have. Several more rounds of DNA tests were performed and in 2015, a full DNA profile was obtained from Bullock’s t-shirt—where the fatal wound was inflicted. That profile contained the same rare identifier and matched the partial profile taken from the fingernail clippings.

Finally, in May 2016, Bryant was granted a new trial, and the charges against him were dismissed. Tragically, less than a year later, Bryant died from a stroke.

Recently, Bryant's family brought a lawsuit against parties such as the Baltimore Police Department, lead investigator William F. Ritz, and forensic analyst Barry Verger. At the end of this post, I will detail the allegations in this lawsuit, which of course will be contested.

But what's interesting about this case is that it's already produced a report by the Baltimore Event Review Team, which

And that report deals, inter alia, with the investigation of Bryant's alibi beginning with a memo from Assistant District Attorney Vickie Wash to Detective Ritz on January 12, 1999. This is important because Wash and Ritz were the team assigned to investigate Adnan Syed's movements, including a possible alibi, on January 13, 1999, the day that Hae Min Lee disappeared, meaning that these investigations were occurring simultaneously. 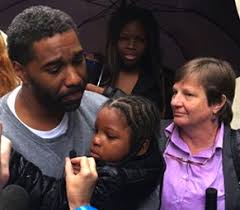 The report on the Bryant case notes that "[o]n January 12, 1999, the ASA assigned to the case sent a memo to detectives":

Bryant's alibi was as follows:

According to the report, however, there was failure to properly investigate Bryant's alibi and failure to comply with discovery rules (including failure to disclose exculpatory evidence): 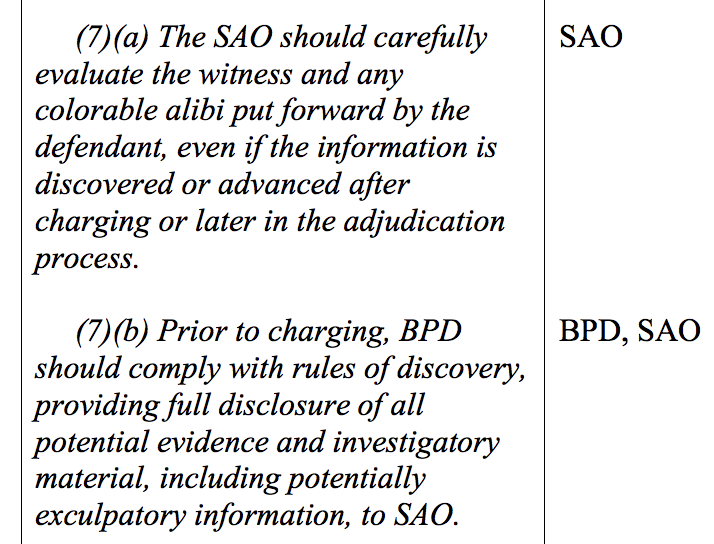 BPD’s file does not indicate any attempt to confirm or refute his alibi, including attempting to speak with all of the parties that Bryant mentioned that could confirm or deny key details. It is unclear whether investigators visited places where Bryant claimed to be: a restaurant before the time of the homicide, the Twilight Club a few hours after the homicide, a convenience store, and a hospital for treatment of a cut that he claimed occurred after a fight at the Twilight Club.

The reason that the report finds "[i]t is unclear whether investigators visited places where Bryant claimed to be" is because the documentation by the Baltimore Police Department and the Baltimore City State’s Attorney’s Office is so spotty. According to the report:

As a result of the poor alibi investigation/documentation in the Bryant case, the report makes the following recommendation:

But the report isn't limited to the alibi investigation and finds that overall "[t]he BPD investigative file lacks expected documentation that could have assisted in identifying the inaccurate conviction." This in turn leads to the following recommendation:

-We don't have notes from interviews with 5 out of the first 8 witnesses they interviewed after Adnan was arrested: "Ann," Debbie, Aisha, Jeff J., and Patrice;

-We don't have the interview notes from the interview of Coach Karl Brown, who was selling his motorcycle, but we do know that Wash was present for that interview: 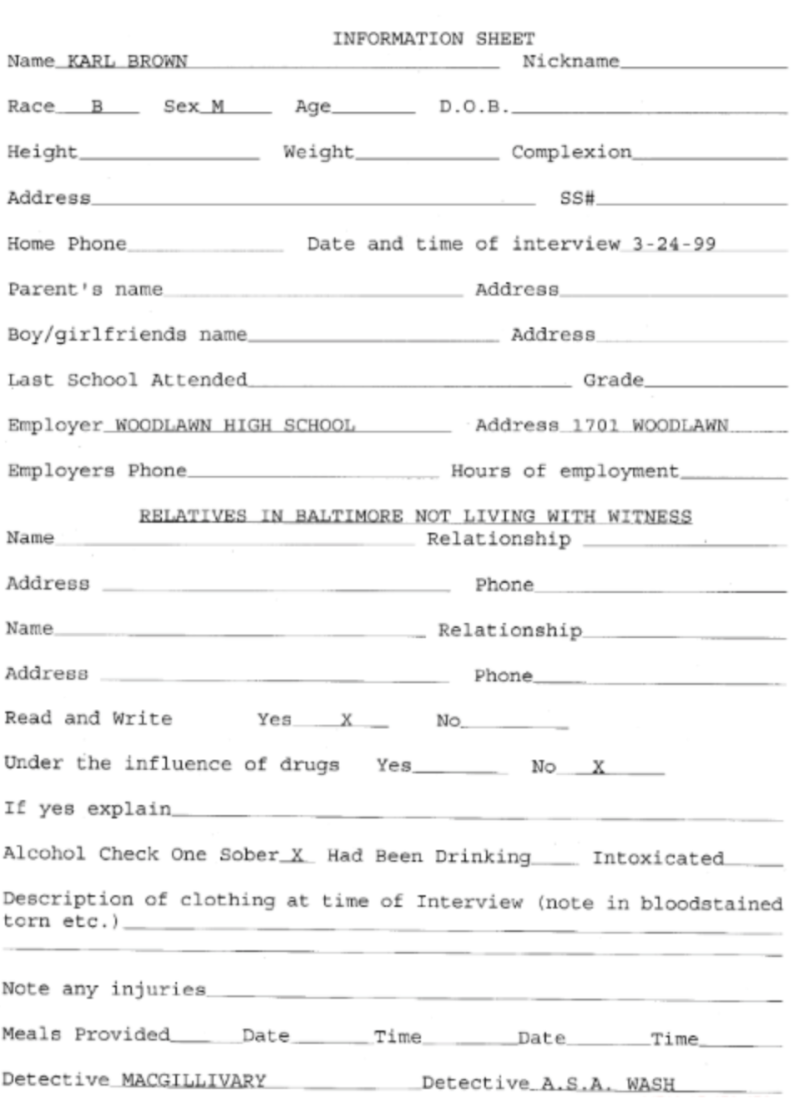 -It does not appear that anyone from the State interviewed any of Adnan's track teammates who could have corroborated Adnan's alibi, including his teammate Will, who Jay mentioned in his March 18th ride-along:

-It does not appear that anyone from the State interviewed "Takera," the student whom sat next to Hae Min Lee in her final period class and whom Debbie said asked Hae for a ride after school on January 13, 1999:

In other words, as in the Bryant case, we see Wash and Ritz (1) failing to fully investigate a possible alibi defense; and (2) failing to properly document their investigations. In the Bryant case, a report that was done with the participation of the Baltimore City State’s Attorney’s Office and the Baltimore Police Department found that these types of errors contributed to Bryant's wrongful conviction and that proper conduct could have prevented his wrongful conviction. You could just as easily draw the same conclusion based upon their similar errors in the Adnan Syed case that they were investigating at the same time.

The suit alleges Ritz failed to disclose knowledge of an eyewitness to Bullock’s death, whose account contradicted and undermined testimony from the only eyewitness at trial. Ritz also allegedly failed to disclose multiple pieces of evidence pointing to another possible suspect in the case.

These, of course, would be Brady violations if proven, and they would undermine any faith we can have that Ritz disclosed material exculpatory evidence in the Adnan Syed case that he was handling at the same time. We will have to see, however, how the lawsuit proceeds.

Is the event review team looking at Adnan’s case?

Lots of issues raised by the case. Further afield is "Don's" alibi and the note on the second fax from employer that the manger vouching for Don's wherabouts was his mother. Somehow I doubt that defense ever saw this (Brady). Further, that investigators should have realized the relationship earlier, leading to focus on ex-boyfriend if current boyfriend had alibi. I guess more detail for second trial. Honorable prosecutors should have investigated this in recent years if they had any sense of justice and desire to identify actual perpetrator.

Seriously Hal is right. Presume we are back in 1999 and know nothing about the case. Young girl ends up murdered: who do you focus your investigation on first? Boyfriend. Imagine if at that point things hadn’t gone “Rock hard alibi, moving on” but instead been “Shaky alibi that looks falsified, boys mother being the potential source of such falsification.” How different would things have progressed from there...

I find the similarities between the Bryant and Syed cases to be incredible. Same time frame – same players – same sloppy mistakes made by BPD and SAO, but also the added insult of his trial attorney being inept. In addition to what Colin Miller points out above – there is also Recommendation 13 – which relates to Adnan Syed’s multiple post-conviction appeals.
“Recommendation 13: The SAO should continue its creation and refinement of conviction integrity procedures to allow for detailed review of claims of actual innocence. These procedures and protocols should continue to allow for review by different personnel within the office and should clarify the relationship between the CIP and regular handling of post-conviction matters.
Recommendation 13(a): SAO personnel involved in review of claims of actual innocence should be trained about confirmation bias when conducting the internal reviews
Narrative following above: During the early years of the appellate process, SAO policy was that the Assistant State’s Attorney who handled a case at the trial court level would also handle post-conviction matters for the case. The risk of a confirmation bias on the part of the trial attorney who obtained a conviction in the murder of Ms. Bullock seems clear. Whether or not such a bias existed, the SAO during this time exhibited a lack of enthusiasm for conducting additional DNA testing.“
In Adnan’s case the risk of confirmation bias is blatantly obvious. V Wash, who acted as SAO, is now promoted and making further decisions regarding Mr. Syed and his requests for relief. And the prosecutor at trial is now allowed to VOLUNTEER his services to present the State’s argument at each Post-Conviction appeal.
The similarities between these two cases is unquestionable – and this report clearly states what changes need to be occur to prevent further false convictions. Adnan has been pleading for a new trial long enough. It is time for Maryland, and Baltimore, to relent and give him the relief he has been requesting.

They know they would be made a laughing stock were they to try Syed again from scratch. They know it’s the present conviction or bust.

Let’s just hope they are about to bust on a hard 16.