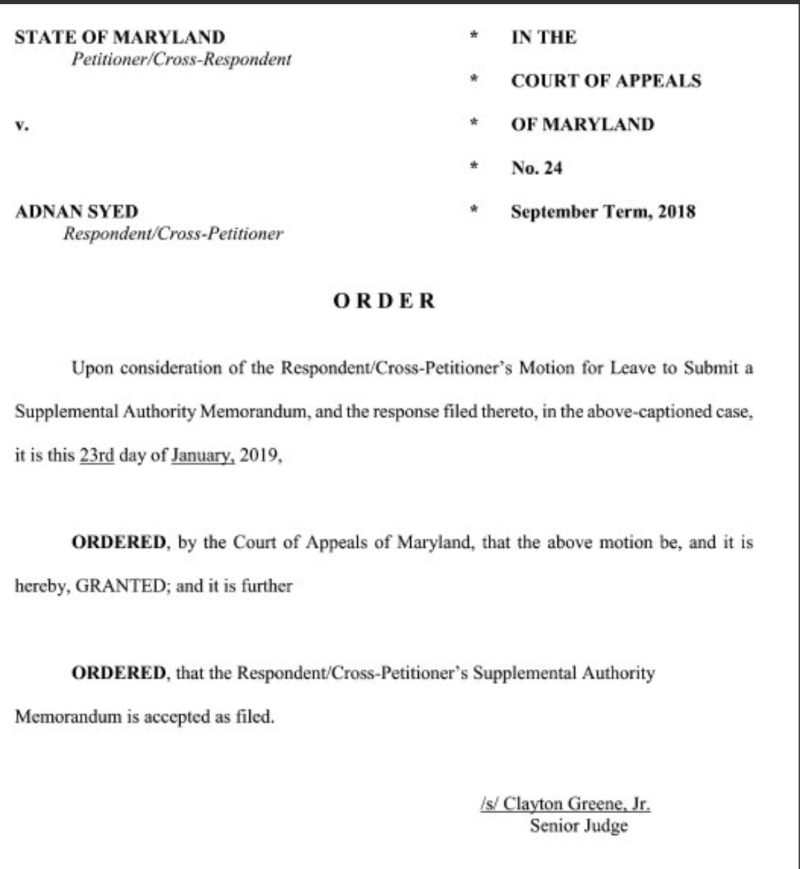 So, what's the significance of this decision?

The Court of Appeals is hearing the State's appeal from a 2-1 decision by the Court of Special Appeals of Maryland in favor of the defense. In such a case, there are four possible outcomes:

(1) affirm the reasoning/decision of the lower court majority;

(2) reverse based on the reasoning/decision of the lower court dissent;

(#) affirm the decision of the lower court majority but with different reasoning; and

(4) reverse based on the decision of the lower court dissent but with different reasoning.

Simply put, (1) and (2) are exceedingly common while (3) and (4) are much, much rarer. And that's where Wednesday's decision because important. In her dissenting opinion for the Court of Special Appeals of Maryland, Judge Graeff used the opinion of the Court of Criminal Appeals in Broadnax v. State, as the primary case to support her reasoning for why Adnan should be denied a new trial. This excerpt

is from the start of her section on why Adnan shouldn't get a new trial, and she has a length discussion of Broadnax that extends from page 6 to page 9 on her opinion. On that 9th page, she concludes her discussion of Broadnax by noting that "[a]lthough Broadnax did not involve a failure to investigate an alibi witness identified by the defendant prior to trial, it does illustrate the principle that a decision not to investigate a certain defense does not constitute ineffective assistance of counsel if it is reasonably based in trial strategy." In other words, she is acknowledging that Broadnax was not an alibi case but inferring from the opinion that Alabama courts would reject an alibi claim like the one brought by Adnan.

The recent opinion by the Supreme Court of Alabama in the Gissendanner case, however, makes clear that this isn't true. Instead, as I noted in this post, the Supreme Court of Alabama found ineffective assistance of counsel based on defense counsel's failure to contact alibi witnesses in that case, rejecting some of the very same arguments made by the State in the Adnan Syed case.

And this is where the defense's Supplemental Authority Memo becomes key: It asked the Court of Appeals of Maryland to consider this new Gissendanner case in deciding Adnan's case. Basically, the defense was informing the court that the likeliest avenue for the State winning -- the Broadnax case used by Judge Graeff -- was now closed due to a new case by Alabama's highest court. And with the Court of Appeals's ruling on Wednesday, it will now consider this case.

Wow. You mean Alabama wasn’t god awful and stupid for once? I think he’ll just froze over and we should be more worried about the apocalypse!

In all seriousness it’s really interesting that a huge part of the dissent by Graeff was cut off at the knees because an alabma court did the right thing. ;) thanks for sharing this Colin!

Hey, give Alabama some credit. During that recent special election when it was the sane, reasonable politician running against the hate-mongering xenophobe who oh btw also happened to be a pedophile — they did manage to vote in the sane guy.

Alabama is also home to the Equal Justice Initiative which works hard to free wrongly convicted men and women. Alabama has its issues, but I am proud of the work being done here.

Thank you, Colin Miller for clearly explaining to the average layman the importance of this latest decision. Is this awaited decision the final step towards a new trial, i.e. could there be yet another appeal on either side?