Blaine Milam Seeks a Stay of Execution Under Texas's Junk Science Statute. Here's Why It Should be Granted.

[Update: The Court of Criminal Appeals of Texas has stayed Blaine Milam's execution, concluding, "Because of recent changes in the science pertaining to bite mark comparisons and recent changes in the law pertaining to the issue of intellectual disability...we therefore stay his execution and remand these claims to the trial court for a review of the merits of these claims.”]

Blaine Milam is scheduled to be executed tomorrow, January 15, 2019. "Milam – who prior court pleadings have argued is intellectually disabled – and his mentally ill girlfriend, Jessica Carson, were convicted of killing Carson’s 13-month-old daughter, Amora, during an alleged exorcism in 2008." The State was unsure whether Milam or Carson (or both) killed Amora, so they presented the case to the jury under Texas's law of parties, which says "that a co-defendant involved in a crime that results in a murder is just as responsible, even if that defendant was not involved in the actual killing."

Is Milam guilty? I don't know. Answering that question would require a lot of research, but this is clearly not a straightforward case of innocence. That said, Milam has asked for a stay of execution, and I feel strongly that he should be granted that stay. Why? 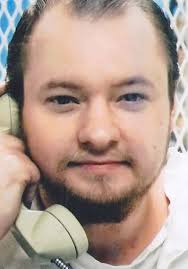 The "strongest" evidence against Milam at trial was bite mark evidence, which the prosecutor called the "smoking gun" against him.  Specifically,

This allows us to draw a comparison between the Blaine Milam case and the case of Ray Krone, also known as the "snaggle-tooth killer":

Later, however, "Krone was released after DNA testing proved that he could not have been the perpetrator. Instead, saliva and blood found on the victim matched a convicted rapist." Krone is not alone; "bite mark evidence has led to more than two dozen wrongful arrests or convictions."

This takes us to the reason why Milam is asking for a stay of execution. Texas is one of two states (the other being California) with a junk science statute. Texas's version states in pertinent part that

(b) A court may grant a convicted person relief on an application for a writ of habeas corpus if:

(B) the scientific evidence would be admissible under the Texas Rules of Evidence at a trial held on the date of the application;  and

(2) the court makes the findings described by Subdivisions (1)(A) and (B) and also finds that, had the scientific evidence been presented at trial, on the preponderance of the evidence the person would not have been convicted.

And so, Milam is claiming that there is new scientific evidence from the past couple of years that renders bite mark evidence unreliable. Here is the State's own description of his evidence:

Simply put, this is pretty compelling evidence. For example, the President’s Council of Science and Technology report concluded that 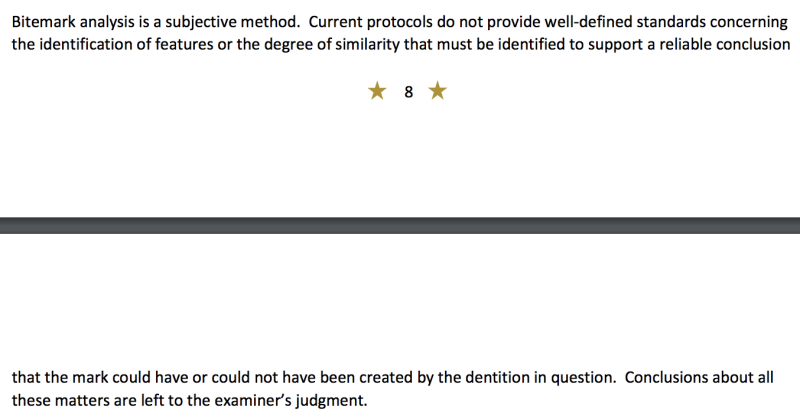 Meanwhile, the the American Board of Forensic Odontology says the science supports only 3 conclusions: "(1) excluded as having made the bitemark, (2) not excluded as having made the bitemark, and (3) inconclusive." And, finally, the opinion of the Court of Criminal Appeals of Texas in Chaney, issued just last month, found that Steven Mark Chaney was wrongfully convicted based on bite mark evidence. Significantly, the court reached this conclusion based on new scientific evidence connected to bite marks:

The body of scientific knowledge underlying the field of bitemark comparisons has evolved since his trial in a way that contradicts the scientific evidence relied on by the State at trial. New peer-reviewed studies discredit nearly all the testimony given by Hales and Campbell about the mark on John’s left forearm and Chaney being a “match.” The revised ABFO standards and 40 affidavits attached to Chaney’s writ application support that conclusion.

The State's response isn't to dispute this scientific evidence connected to bite marks; it is to claim that it's not new. According to the State,

much of the evidence proffered by Applicant is either not recent, was addressed at trial, or does not affect the admissibility or reliability of the overwhelming majority of the bitemark evidence admitted at this trial.

It's really tough to see how that's the case when literally one month ago the Court of Criminal Appeals of Texas held that there is new evidence on the reliability of bite mark evidence that changes the way that Texas courts will deal with such evidence (and which led to Chaney being exonerated). Therefore, it seems clear to me that Milam should be given a stay of execution.

I can't find a rollup of the evidence presented at trial but given this bite mark stuff, it wouldn't surprise me if he gets a new trial, not just a re-look at the bite mark evidence.

His competence to have stood trial must be in doubt, given his diminished capacity.