An Update on the Adnan Syed Case

Steve Klepper (@MDAppeal) has a great mega-thread on the appeal in the Adnan Syed case that coincides with a significant development in that appeal. So, where do we currently stand, and what can Klepper's thread tell us about the future of Adnan's case?

As Steve Klepper reported, the appeal filings in the Adnan Syed case were distributed to the Court of Appeals judges yesterday. Over the next month, the judges will review these filings and decide whether to grant cert. Typically, the vote on whether to grant cert would occur at the July conference (July 26th), although sometimes such votes happen before the next conference. Assuming the vote occurs at the July conference, we should know whether the Court of Appeals granted or denied cert before the end of July. Again, if the Court grants cert, the appeal will be heard, with oral arguments likely taking place in the fall. If the Court denies cert, the opinion granting Adnan a new trial stands, and the State is out of appeals at the state level (they could still try a Hail Mary to the Supreme Court).

Well, again, we seem to be on the same page. Here is a key section of Klepper's mega-thread: 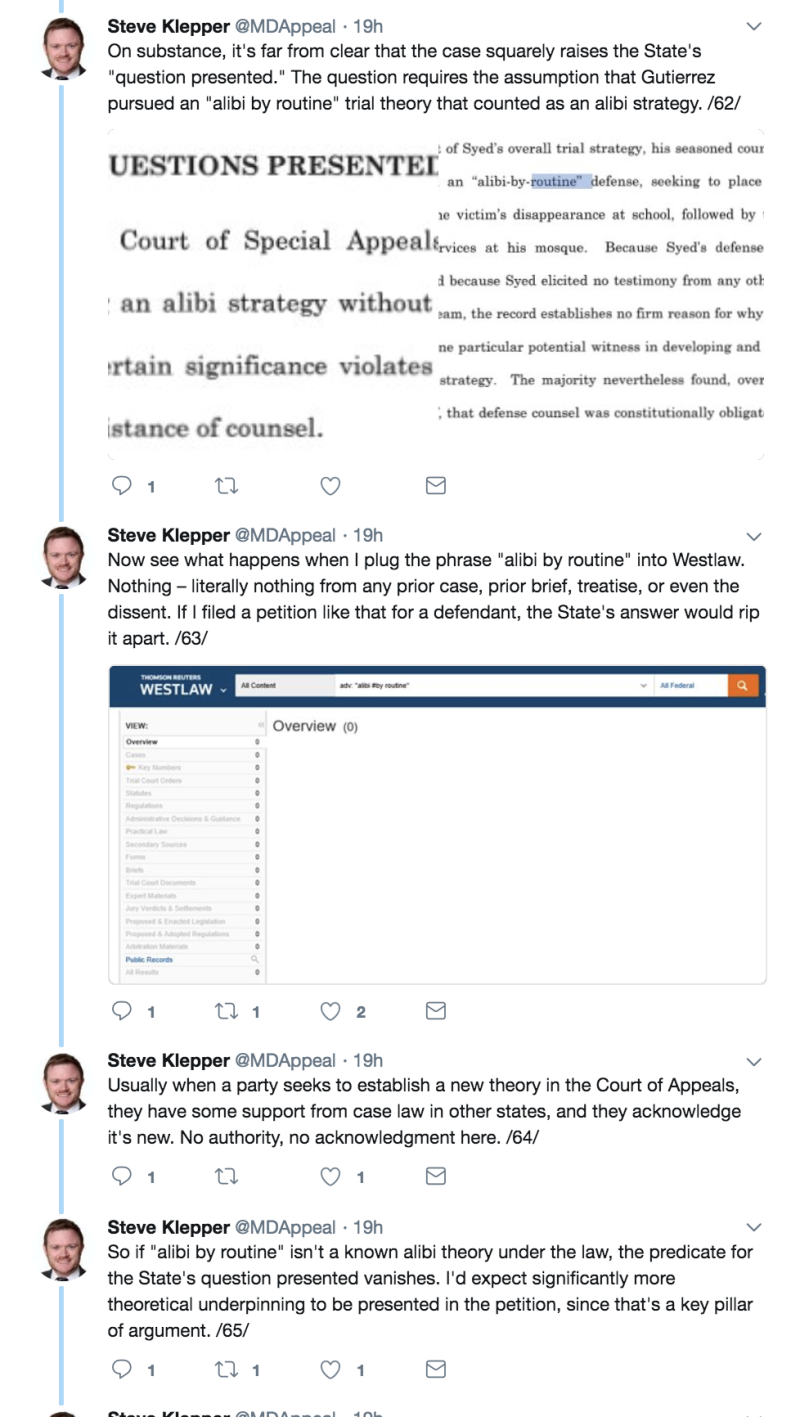 In this case, the State could have done a "question presented" that matched the position advanced by Judge Graeff's dissenting opinion. It would have gone something like:

Whether the Court of Appeals erred in finding that Mr. Syed met his burden to overcome the presumption that counsel’s failure to contact a potential witness was based on reasonable trial strategy under the Strickland test. the requirements of the performance prong of the Strickland test?

This is pretty close to the end of Judge Graeff's opinion, where she wrote:

[Mr. Syed] has failed to meet his burden to overcome the presumption that counsel’s failure to contact Ms. McClain was based on reasonable trial strategy, and therefore, he has failed to meet the requirements of the performance prong of the Strickland test.

Judge Graeff's listed about five or six reasons why she thought that Adnan had not overcome this presumption, and a broad "question presented" would have allowed the Court of Appeals to grant cert if it possibly agreed with any of those grounds.

But instead, the State listed the following "question presented" in its cert petition:

Whether the Court of Special Appeals erred in holding that defense counsel pursuing an alibi strategy without speaking to one specific potential witness of uncertain significance violates the Sixth Amendment’s guarantee of effective assistance of counsel.

The cert petition than explains the alibi/trial strategy:

As part of Syed’s overall trial strategy, his seasoned counsel developed and pursued an "alibi-by-routine" defense....

And this is why we're in coin flip territory. The judges of the Court of Appeals might look at the question presented and its explanation, see no support for the "alibi-by-routine" claim, and decide against granting cert. After all, the "question presented" by the State is based upon a false premise: that defense counsel developed an "alibi-by-routine" defense that Asia McClain would have contradicted.

Or, the judges of the Court of Appeals could look beyond the State's cert petition, focus on the reasons given by Judge Graeff in her dissent, and grant cert to address the issues she raises in her dissent?

What will the Court of Appeals end up doing? We'll find out soon enough.

Colin, in an earlier tweet Steve had posted a screen shot of a docket listing that showed the state had filed (an untimely?) response in support of their application on the 18th. Is this response available anywhere? And what did it say? I have not been able to find anything else on this.

Wow, I’m not sure I understand all this, but I’m glad it did get onto the CoA docket to be decided in July. That’s sooner rather than later!

If the COA denies the appeal and CoSA's decision becomes final, what do you think the odds are that a new bail petition will succeed?

Also, if the State tries to get a hearing from SCOTUS, how long will it take for that to be granted or denied?