Earlier today, I did a second post on the case of Cyntoia Brown.

Brown, now 29, was a 16-year-old victim of sex trafficking in Tennessee in 2004 when she fatally shot Johnny Mitchell Allen, a 43-year-old real estate agent who solicited sex from her, according to court documents and multiple local reports. Brown — who admitted she killed Allen by shooting him in the back of the head — becomes eligible for parole soon after she turns 69.

In that post, I noted that neither the trial nor the appellate court heard evidence regarding Brown's birth mother kidnapping her and engaging in other behaviors that should have been relevant to the sentencing decision. But I closed that post by noting that this evidence wouldn't in fact have been relevant under Tennessee's sentencing scheme. Why?

Upon a trial for first degree murder, should the jury find the defendant guilty of first degree murder, it shall not fix punishment as part of the verdict, but the jury shall fix the punishment in a separate sentencing hearing to determine whether the defendant shall be sentenced to death, to imprisonment for life without possibility of parole, or to imprisonment for life.

In other words, the mandatory minimum sentence for first-degree murder in Tennessee is a life sentence with the possibility of parole. Therefore, Brown actually got the lowest sentence possible under Tennessee law, meaning that evidence related to her birth mother couldn't have lowered her sentence.

In one of her appeals, Brown claimed

that her automatic life sentence constitutes cruel and unusual punishment because she will not be eligible for parole for fifty-one years and, therefore, will serve a longer term of incarceration than an adult defendant who receives a life sentence. She also argue[d] that a trial court must be allowed to exercise judgment and discretion in sentencing juvenile defendants so that the court can consider factors such as the defendant's youth and mental capacity....

In support of her argument, [Brown] relie[d] on various cases which she says “teach that sentences and criminal process must be made proportionate to the level of maturity and culpability of the defendant.”

The Court of Criminal Appeals of Tennessee disagreed, concluding as follows:

[T]he Petitioner has failed to cite any mandatory authority in which a court has held that a juvenile defendant's life sentence was unconstitutional. Instead, she cites Miller v. Alabama, 132 S.Ct. 2394 (2012), in which the United States Supreme Court held that a mandatory sentence of life without the possibility of parole for juvenile offenders violated the United States Constitution's Eighth Amendment prohibition against cruel and unusual punishment. As the post-conviction court noted, though, life without the possibility of parole is not the sentence at issue here.

The Petitioner also cites State v. Andre Jerome Lyle Jr., in which the Iowa Supreme Court recently held that all mandatory sentences involving juveniles, even short sentences, violated the state constitution....However, Lyle constitutes persuasive, non-binding authority, and panels of this court have refused to expand the holding in Miller to life sentences for juveniles, let alone sentences involving less than life....Therefore, the post-conviction court properly denied relief on this issue.

So, let's break that all down. Miller v. Alabama said that you can't have a mandatory sentence of life without parole for a juvenile offender. Tennessee law provides two sentencing options for juveniles convicted of first-degree murder:* (1) life without the possibility of parole; and (2) life with the possibility of parole after serving 51 years (so, age 69 for Brown, who was convicted at age 18).

Tennessee claims that this means there is a choice between life without the possibility of parole and life with the possibility of parole, which does not violate the Constitution. But Marsha Levick of the national Juvenile Law Center disagrees, and there are indications that changes might be afoot in Tennessee. Here's an excerpt from an article in the Times Free Press: 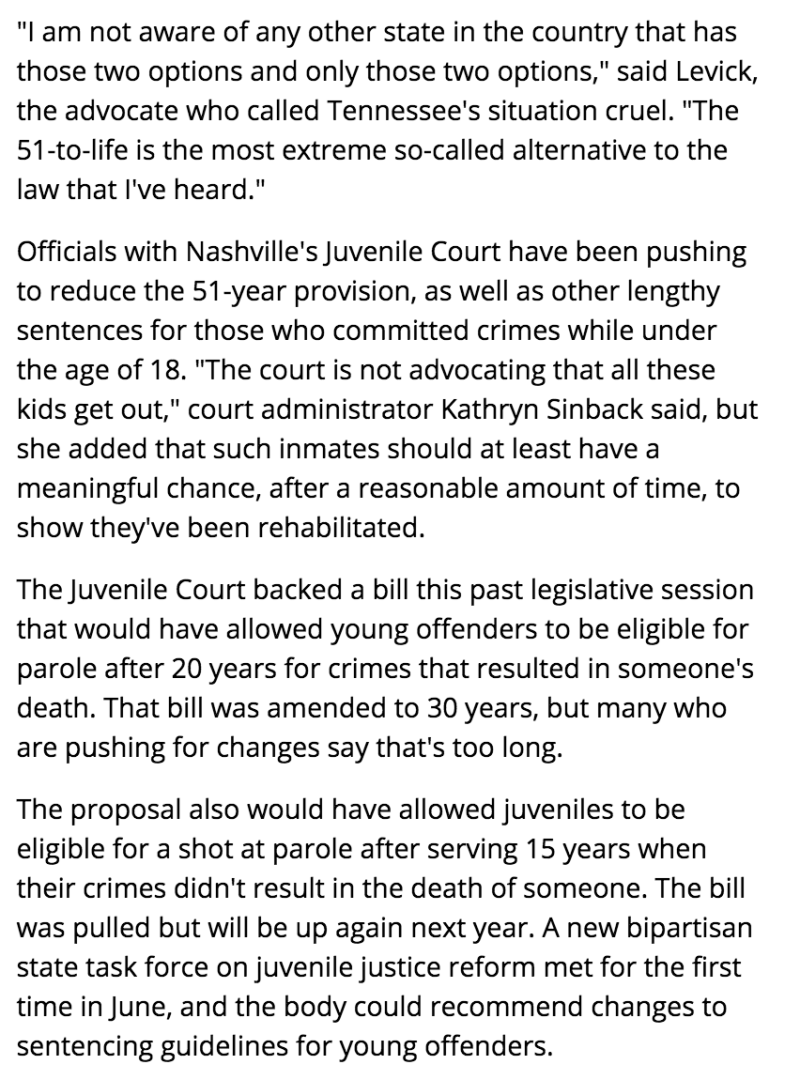 And what about juveniles in Tennessee who were given life without parole sentences? According to the Times Free Press article:

Needless to say, there are a lot of issues with juvenile justice in Tennessee, but at least there's hope that some of these issues might be addressed in the coming year.