Last week, I posted an entry about Jenn's Day in the Adnan Syed case based on her trial testimony. Next, I planned to do a post about Jenn's Day based upon her police interview. I will still do that post, but I came across something interesting in Jenn's interview that I don't think I fully processed before. I also can't remember anyone else addressing it, so I figured I would do a post on it.

This comes from pages 16-17 of Jenn's police interview:

Next, the second interesting thing about this excerpt is Jenn's description of what Jay told her about the burial. According to Jenn, Jay told her that (1) he didn't know the location of Hae's car; (2) he dropped Adnan off at one place in the city, "a different broads house" or "a different chicks house;" and (3) he picked Adnan up at a second place in the city, presumably after Adnan had buried Hae's car and dumped her car somewhere.

Of course, about a day later, Jay would tell a very different version of the burial, with Jay helping Adnan dig the hole and later helping him ditch Hae's car. And, of course, Jay's story would later evolve a few times, with the most recent permutation being the story he told in The Intercept interview.

Now, my purpose with this post isn't to determine which version of events is actually true. My question is simply to ask the origin of Jenn's story to the detectives. Which of these possibilities do you think is likeliest:

(1) Jenn is honestly and accurately telling the detectives what Jay told her on January 13th;

(2) Jenn is trying to tell the detectives what Jay told her on January 13th, but is being (very) inaccurate;

(3) Jenn is lying to the detectives about what Jay told her on January 13th; or

(4) Jenn is telling the detectives what Jay told her the night before the interview.

Personally, #4 is the most interesting possibility, and this is the case for me based upon another portion of Jenn's interview I hadn't fully processed before: 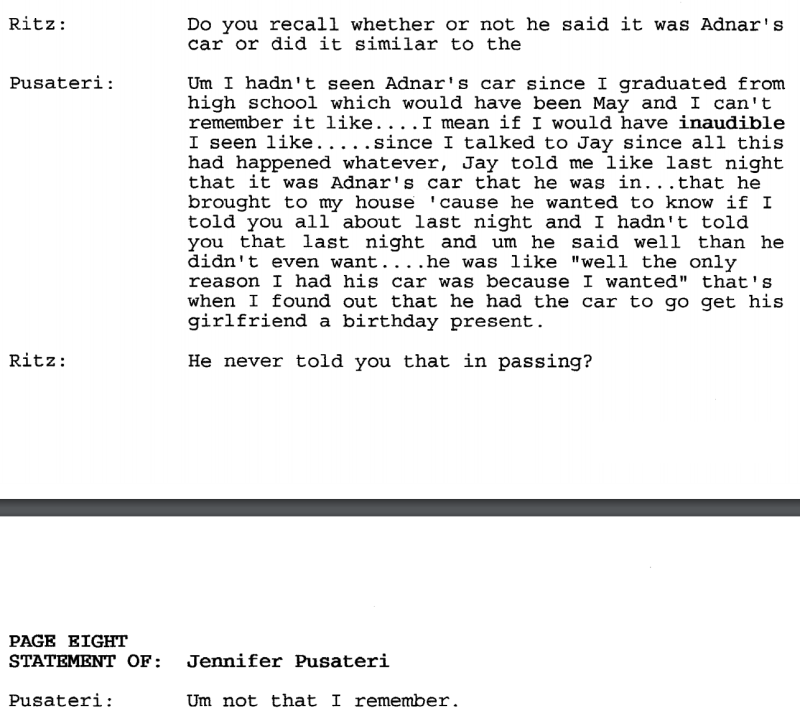 As this excerpt makes clear, between Jenn's first, aborted interview with the detectives and her second interview, she talked to Jay, who told her at least a few important details about January 13th for the first time. But how much did they discuss? For instance, does this conversation explain why they both say that Jay didn't leave Jenn's house until after 3:30 P.M.?

This interview reminds me of Jeff sessions testimony. Quite confusing

It's a shame Jenn still seems to be strongly entwined with Jay's family--if she could just tell us the truth about when Jay asked her to say these things, it'd go a long way.

Jay and Jenn are lying. The truth never changes, when you lie the story changes as in this case. Adnan was wrongfully convicted because of Jay's story. There was no solid evidence regardless of what the judge stated, all evidence was purely circumstantial. The police were pushing Jay to confirm Adnan as the murderer. The police didn't look at anyone else, the police were in a rush to convict. Ronald Lee Moore is most likely the killer it is not Adnan and it's a shame over half his life has been in jail for a crime he did not commit.

What struck me about this excerpt when I originally heard it is the slip of the tongue that Jenn commits. Any slip like this can be an indication of lying. In particular, when Jenn says, "...asked me if I would help her bury him", instead of "asked me if I would help him bury her," it could be that she is unconsciously referencing that she herself is helping Jay to "bury" Adnan.

I agree with Pangolin. That comment alarmed me re “burying him”. I believe Jay was talking about Adnan. When I first heard on the podcast about Jay going back and wiping his prints from the shovels I believed he was involved in a big way. To me, he has always been the main suspect.

I don’t think Jenn has much clue about what really happened. I don’t think Jay gave her a full explanation when he came to her in February asking her to back him up about something he told her happened in January.

I think Jay chose not to give her the full explanation—that he’d talked himself into a serious bind with the cops and was certain he would be charged alone if he confessed he made the whole thing up—possibly because he didn’t want Jenn to try convince him along the lines “wait jay, this is crazy. If you had nothing to do with this, you can’t say that you did. Even if Adnan did do it, if you had no part in it, you can’t lie and say you did! we can explain the truth and fix this whole thing.” Basically putting up a fight and try convince Jay out of his already decided course of action. Maybe Jay deemed convincing her with the true explanation too risky, after all he just needed someone to corroborate his story, so he elected to tell Jenn that he really did help Adnan murder her, just in a role that was minimized as much as possible. He told her what he needed her to say, but not any explanation why her doing so helped him. Probably it was something along the lines of “Look, Jenn, I really need you to do this for me. Just tell the cops I told you about Adnan killing Hae that day and that we did X, Y, and Z. Please just do this. I’ll explain everything later.”

This is why Jenn seems so confused when answering questions. Since she never fully understood the “why?” behind the lies, she just knows that Jay asked her to lie and say she remembers X, Y, and Z. Past that, there was no clear explanation why he wanted her to do that, so she of course doesn’t know which direction to pull that story when new questions came up. As a result, she just did her best to minimize Jay’s culpability as much as she could.

The most telling slip of the tongue I think is when Jenn describes on Feb 4th at Champs seeing the news clip about Hae’s disappearance. She accidentally says “And that was the first I heard about her being missing” —...ummm whoops! She then tries to recover saying “I mean, of course, of course I knew she was missing, I mean... I knew she was dead. I guess I meant just like... I was surprised. I don’t know, I guess I was just like oh shit, what are we gonna do? Yeah... that’s it, I was thinking like oh no what are we gonna do.”

Jay has tried to include Jeni in his lies, but Jennifer is struggling to tell the lies accurately.