Recently, someone was asking about a particular aspect of Jenn's testimony in the Adnan Syed case. This led me to realize that while we had episodes on Adnan's Day, Hae's Day, and Jay's Day on Undisclosed, we never had an episode on Jenn's Day. This post is an attempt to piece together what she claims at trial was her timeline on January 13th (I might do a separate post in the future about her police statement). All of the excerpts are taken from Jenn's trial testimony. This post isn't an attempt to compare Jenn's day to other evidence/statements/testimony in the case; it's just laying out what she said.

12:00-12:30ish: Jenn finishes her shift as a lifeguard at Heartlands in Ellicott City. Jenn usually finished her shift at about noon, but she "got off a little late" on January 13th because they were having difficulties with the pool and she had to wait for someone from the pool company to make adjustments.

1:00ish: Usually, Jenn would pick her brother up from school at around 1:00 P.M. after leaving work, but she doesn't testify regarding whether she picked him on January 13th.

3:30-3:45: It's unclear, but it seems like Jenn testifies that Jay did get a call on the cell phone, although Jenn doesn't remember if she heard Jay talking on the phone. Jay then left Jenn's house between 3:30 and 3:45 P.M. 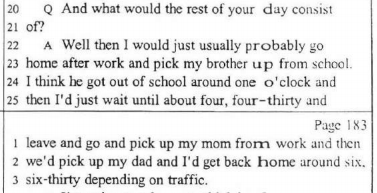 6:00-6:30ish: After arriving home, Jenn called Cathy's place and talked to Jay (briefly), Cathy, and Jeff. While Jenn was on the phone with Cathy or Jeff, Jay left Cathy's place. Jenn and Jay were supposed to hang out and go to Cathy's house later that night, and Jeff told Jenn that she was supposed to pick up Jay at Gilson Park. 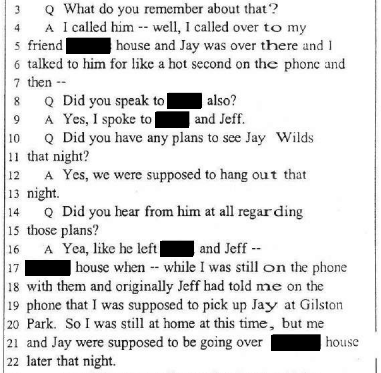 7:00: After Jenn got off the phone with Cathy and Jeff, she got a page/voice message from Jay that was unclear and might have been saying where to pick him up. 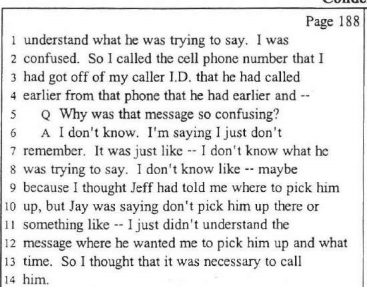 7:09 or 7:16: Jenn called back the phone number connected to the page/voice message. Someone answered and said that Jay was busy and would call her when he was ready for her to come and get him. 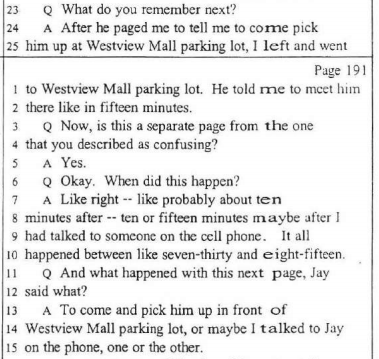 8:20ish: Jenn picked up Jay in front of Value City at Westview Mall. Jay arrived in a car driven by Adnan, who said "hello" to Jenn and spoke with her. 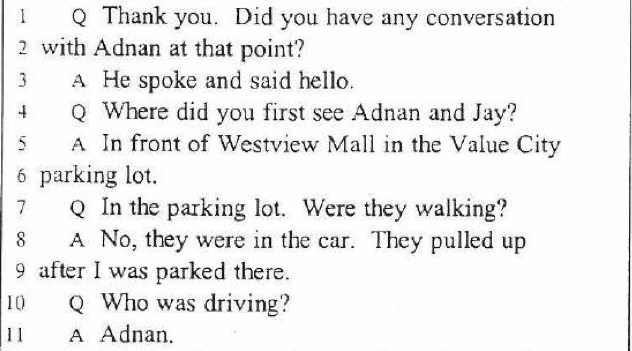 8:20ish-9:00ish: Jay then gets into Jenn's car, tells her to put on her seatbelt, and tells her that Adnan strangled Hae. Jay then says he wants to see Stephanie to make sure she's okay. Jenn and Jay arrive at Stephanie's house between 8:30 and 9:00 P.M. Jenn remained in the car while Jay went up to Stephanie's house, gave Stephanie a hug, and went in her house for a couple of minutes. 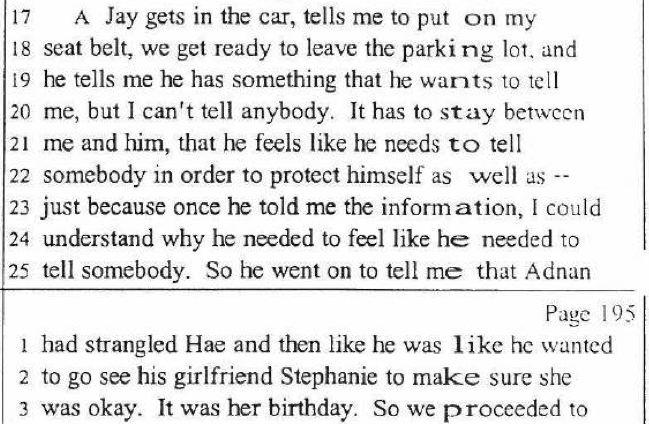 9:00ish-9:30ish: Jay returns to the car and says he's worried about fingerprints on the shovels they used for the burial. Jenn drives Jay back to Westview Mall and remains in the car while Jay walks over to some dumpsters, presumably to wipe off the shovels.

9:30ish-?: Jenn and Jay then went to her friend Shelley's apartment at UMBC.

?-?: Jenn dropped Jay off at his house and went home.

Everything up to 7pm was probably correct, after that all made up

So frustrating every time I return to studying this case. Thanks for posting.

Why would someone make up a story about killing a person, and why is the person being accused not trying to prove his innocence

She clearly was having trouble keeping her story straight. That makes no sense whatsoever.

For me at least, the most telling statement from Jenn by far came during one of her police interviews. She's talking about Feb 4th she's at a bar with Jay and some friends and she sees a news story about Hae's disappearance, and she finishes by saying "And that was the first time I heard that she was missing.." --OOOPS.

I just want to know what Jay's rationale explanation was to convince her that it would help him by saying he told her about burying Hae that day. I can imagine Jenn's confusion asking "wait why would me implicating you as being a part of this help you?" and Jay Insisting "Just trust me ok, I need you to do this."

Given such an unclear reason why she has to say the things she saying, it's no wonder she gets so confused at times as to the story she's supposed to tell to help Jay out

Armando: The person accused has literally had is conviction vacated and his presumption of innocence restored. I am not sure if you noticed him working for the past several years to do just that.

Key issue: What pressures were placed on, and perhaps continue to be placed on, both Jay and Jen by prosecutors and police, especially after they realized that Jay had Adnan’s car and cell phone especially since the boyfriend appeared to have a good alibi. I gather that Jen was one of the limited number of principals with consistent access to a car and therefore may have, wittingly or not, aided Jay in his “distribution” business. We do know that the police pulled Adnan over and searched his car in a contrived traffic stop, perhaps Jay and/or Jen also? Jay, Jen, and the police may have told themselves that it was OK to participate in framing Adnan to see justice done. Or or for Jen and Jay just to save themselves, justifying their reasoning with “If not Adnan, then who?” Only speculation at this point because we just don’t yet have enough proof/evidence/info.

They had previous run ins with the law, they were getting squeezed

I also suspect that their testimony was probably forced in some way. Speaking hypothetically: Given the passage of time, what legal liabilities might Jen potentially face NOW if she gave (truthful) testimony that contradicted her earlier testimony? Especially if prosecutors/police investigators might find it discomforting. Might an embarrassed or vengeful prosecutor have grounds for some charge? I believe I have heard/read comments to the effect that Maryland lacks a statute of limitation, at least relating to these issues. But I may have misunderstood or misremember
More generally, and a recurring theme in this story (in addition to bigotry) is an almost hopeless poverty—families so poor that 3 or 4 working adults must still share one car for vital transportation; even the better students of the school still having to confront remarkable deprivation and very limited prospects, etc. Many of these people, certainly Jen and Jay, cannot afford the basic legal advice that they desperately required.

Thanks for this post, Colin. What do you make of this? - “He came inside and we hung out in the living room for a little bit and then we went and played video games…”
Is it possible they went outside the home to play video games? And if so, what would that imply? Her testimony later on describes picking up her mother and father and returning home.