Last Friday, I predicted that the Court of Special Appeals will grant Adnan a new trial on the alibi issue and not address the portion of Judge Welch's order dealing with the cell tower issue, and specifically the waiver issue. Part of the reason for this is that the Court of Special Appeals is quite limited in what it can do on the waiver issue. Judge Welch, of course, ruled that (1) the Court of Appeals of Maryland found in Curtis v. State, 284 Md. 132 (1978), that the right to the effective assistance of counsel is a "fundamental right;" (2) as such, a claim of ineffective assistance of counsel must be knowingly and intelligently waived; and (3) Adnan did not knowingly an intelligently waive his claim that he received the ineffective assistance of counsel based upon Cristina Gutierrez's failure to use the AT&T disclaimer to cross-examine the State's cell tower expert.

A big part of the State's claim on appeal is that Curtis v. State is outmoded because, inter alia, it was issued when a petitioner could file an unlimited number of PCR petitions. For instance, the State argues: 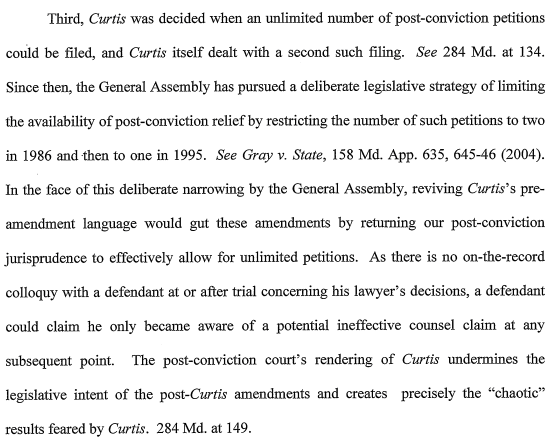 The problem for the State, however, is that the Court of Special Appeals has no authority to overrule Curtis on the ground that it's outmoded.

In Baker v. State, 853 A.2d 796 (Md.App. 2004), Michael Lee Baker was convicted of first degree assault, second degree assault, and use of a handgun in the commission of a crime of violence. At trial, Baker chose not to testify and later appealed on the ground that the trial court should have been required to ask jurors whether they would draw an inference from his decision not to testify. The Court of Special Appeals disagreed, finding that the Court of Appeals of Maryland had reached the opposite conclusion in Twining v. State, 198 A.2d 291 (1964). And, after giving lip service to Baker's arguments, the Court of Special Appeals concluded that "In any event, it is up to the Court of Appeals, not this Court, to decide, as appellant suggests, that the reasoning of Twining is 'now outmoded.'"

The following year, in Marquardt v. State, 882 A.2d 900 (Md.App. 2005), the Court of Special Appeals reiterated this point, noting that "[a]s we have recently stated, 'it is up to the Court of Appeals, not this Court, to decide, as appellant suggests, that the reasoning of Twining is 'now outmoded.''" Indeed, the Court of Special Appeals revisited this issue as recently as a couple of years ago, concluding in Campos v. State, 223 Md.App. 769 (Md.App. 2015), that "[t]his Court cannot overrule a Court of Appeals decision; nor would we be inclined to overrule Twining even if we had the power to do so."

Now, the Court of Special Appeals of Maryland could find that Curtis is limited to its facts. First, Curtis involved "total abandonment by counsel" whereas Adnan is "merely" claiming ineffective assistance of counsel. Therefore, the Court of Special Appeals could find that Curtis doesn't apply to Adnan's case, but this seems unlikely given that the court has found that the right to counsel is the right to the effective assistance of counsel.

So, if the the Court of Special Appeals can't overrule Curtis and isn't able to distinguish it from Adnan's case, how does the State win on waiver? It would need to convince the Court of Special Appeals that Judge Welch made the wrong legal conclusion about whether Adnan knowingly and intelligently waived the cell tower claim, which involves a de novo/clean slate review. But the problem for the State is that this legal conclusion was based upon factual findings about Adnan not finishing high school and the unlikelihood of a lay person understanding "the intricacies of cellular network design and the legal ramifications of trial counsel's failures to challenge the evidence." And those factual findings can only be altered if the Court of Special Appeals finds them to be clearly erroneous.

So, if the Court of Special Appeals thinks that is outmoded or should be circumscribed, what will it do: (1) not waste time addressing Judge Welch's cell tower ruling because it knows that only the Court of Appeals has the power to do so; (2) try to find something in Curtis that allows it to limit it to its facts in a way that distinguishes it from Adnan's case; (3) issue a "noisy affirmance," where it upholds Judge Welch's cell tower ruling but says that Curtis should be overruled/circumscribed; or (4) try to reach the conclusion that Adnan did knowingly and intelligently waive the cell tower claim.

I'm a little confused on this waiver issue. I thought part of the waiver issue involved the "law of the case doctrine" which states that because adnan/his attorney could have brought up the cellphone issue during his initial pcr hearing but failed to do so, he cannot bring it up now.

Can you please clarify this for me?

The State also claims that Judge Welch shouldn’t have considered Adnan’s IAC/cell tower claim because it was waived. On this point, the State claims that waiver happens once a PCR court rules on issues in a first PCR petition and that the “finally litigated” requirement doesn’t apply to waiver. In other words, the State claims that the law of the case doctrine and waiver are distinct concepts.

Re. the potential for distinguishing Curtis from Adnan's case, presumably COSA needn't only rely on the suggestions of difference put forward by the state, and instead can also think up their own reasoning?

Cupcake: Yes, they could do that. The question is what other grounds for distinction exist.