Today, the Supreme Court of Georgia ruled against The Merchant Law Firm, P.C., inits request "to obtain copies of audio recordings that a court reporter used in preparing trial transcripts." As Bill Rankin noted in his article on the ruling,

Merchant has said Emerson’s hostile demeanor toward her cannot be discerned from the stenographer’s transcripts of a murder case and a racketeering case she tried before him.

After the firm requested the audio recordings, Emerson told Merchant and her law partner husband John that they could come to court and listen to them, but they could not record them. This prompted the firm to file a lawsuit against Emerson and Cantrell in Fulton County Superior Court. But a judge dismissed the case, prompting the appeal to the state’s highest court.

The Honorable Timothy R. Rice, United States Magistrate Judge for the Eastern District of Pennsylvania, sent me a copy of his forthcoming article, "Restoring Justice: Purging Evil From Federal Rule of Evidence 609." (forthcoming Temple Law Review) (Download Restoring Justice). The article deals with Federal Rule of Evidence 609, which allows for the admission of certain criminal convictions to impeach/call into the question the credibility of witnesses at trial. In particular, Rule 609(a)(1) allows for the impeachment of witnesses based upon certain felony convictions that were not based upon dishonesty. Judge Rice notes that this Rule is in fundamental tension with the trend toward restorative justice, "a process to help those with a stake in a specific offense to 'collectively identify and address harms, needs, and obligations, in order to heal and put things as right as possible.'"

The Disinterested Alibi Witness and the Adnan Syed Appeal

In its its Reply Brief of Appellee/Cross-Appellant in the Adnan Syed case, the defense makes an important point about Asia McClain that bears upon prejudice, i.e., whether Cristina Gutierrez's failure to contact/call her as an alibi witness undermines our confidence in the jury's verdict. According to the Reply Brief,

-regardless of the other evidence presented at trial, alibi testimony from a disinterested witness that would have placed Syed far from the victim at the time of the murder is sufficient to undermine confidence in the verdict;

-McClain was a disinterested witness whose testimony would have provided Syed with an alibi for the entire period when, according to the State, the murder took place; and

requires the assumption that testimony from a credible and disinterested witness4 that Syed could not have committed the crime because he was with her when it supposedly occurred would not have been enough to sow any doubt with the jury.

So, what's the significance of Asia simply being Adnan's classmate and not a family member or close friend?

Today, the defense filed its Reply Brief of Appellee/Cross-Appellant in the Adnan Syed case. This is the last brief that will be filed before oral arguments in the Court of Special Appeals of Maryland on June 8th. In the Reply Brief, the defense repeatedly points to the lack of precedent cited by the State on the question of whether Cristina Gutierrez was ineffective based upon failure to contact prospective alibi witness Asia McClain. Specifically, the defense notes that the State only cited two cases on the prejudice prong of this issue, the prong that focuses on whether contacting and calling Asia as an alibi witness would have created the reasonable probability of a different outcome at trial: (1) Lockhart v. Fretwell, 506 U.S. 364 (1993) which dealt with trial counsel's failure to make an objection during a sentencing hearing; and Nix v. Whiteside, 475 U.S. 157 (1986), which dealt with trial counsel refusing to suborn perjury. The defense, of course, argues that Fretwell "has no bearing whatsoever on whether the failure to investigate an alibi witness is prejudicial." So, what about Whiteside?

Washington Rule of Evidence 702 provides that

If scientific, technical, or other specialized knowledge willassist the trier of fact to understand the evidence or to determine a fact in issue, a witness qualified as an expert by knowledge, skill, experience, training, or education, may testify thereto in the form of an opinion or otherwise.

Under this standard, can an advanced registered nurse practitioner (ARNP) testify regarding the medical cause of a particular condition? In its recent opinion in Frausto v. Yakima HMA, LLC, 2017 WL 1533247 (Wash. 2017), the Supreme Court of Washington answered this question in the affirmative.

Would Asia's Testimony Have Magnified or Minimized the Flaws in the State's Case Against Adnan Syed?

Was Adnan Syed prejudiced by Cristina Gutierrez's failure to contact alibi witness Asia McClain? Judge Welch answered this question in the negative in his opinion granting Adnan a new trial on his cell tower claim. In that opinion, however, Judge Welch noted a first flaw in the State's case: "the State presented a relatively weak theory as to the time of the murder because the State relied upon inconsistent facts to support its theory." Specifically, Jay testified that he got the "come and get me" call after 3:45 P.M. while the State argued in closing that the "come and get me" call occurred at 2:36 P.M., after Adnan had killed Hae at Best Buy.

In its Reply Brief and Appendix of Cross-Appellee, the State has now identified a second flaw in the State's case: 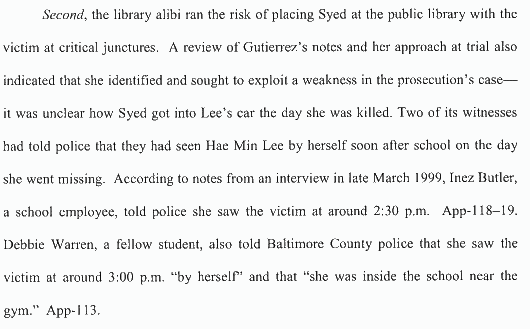 Of course, the State's claim is that Asia's testimony actually "resolves the flaw Gutierrez intended to exploit. Meanwhile, the defense's claim is that these two flaws mean that the State's case was already weak and that there's a reasonable probability that there would have been a different outcome if Asia had testified at trial. So, who is right?

In its Reply Brief and Appendix of Cross-Appellee, the State makes the following argument:

The State, however, didn't mention an equally important development in Maryland law that occurred in 2002.

The Case Against Adnan Syed, Redux

In its Reply Brief and Appendix of Cross-Appellee, the State has a section titled, "Syed Cannot Establish Prejudice in this Case." This is, in effect, an updated version of Episode Six of Serial: "The Case Against Adnan Syed." Essentially, the State uses this section of its Reply Brief to set forth its best evidence against Adnan, other than the cell tower pings, in an attempt to prove that trial counsel's failure to use the AT&T disclaimer wasn't prejudicial. The problem for the State, though, is that its recitation of facts seemingly proves the opposite.

Does the Law of the Case Doctrine Make or Break the State's Case? (Part 2)

In yesterday's post, I began my discussion of the law of the case doctrine and how it relates to Adnan's case. In its Reply Brief and Appendix of Cross-Appellee, the State cited language from the opinion of the Court of Appeals of Maryland in Fidelity-Baltimore Nat. Bank & Trust Co. v. John Hancock Mut. Life Ins. Co., 142 A.2d 796 (Md. 1958) regarding the doctrine:

Once this Court has ruled upon a question properly presented on an appeal, or, if the ruling be contrary to a question that could have been raised and argued in that appeal on the then state of the record, as aforesaid, such a ruling becomes the ‘law of the case’ and is binding on the litigants and courts alike, unless changed or modified after reargument, and neither the questions decided nor the ones that could have been raised and decided are available to be raised in a subsequent appeal. (emphasis added by Reply Brief).

Does the Law of the Case Doctrine Make or Break the State's Case? (Part One)

Adnan's ineffective assistance/cell tower might all come down to something known as the law of the case doctrine, and I have to admit that I'm not entirely sure how the court will rule on the issue. In its Reply Brief and Appendix of Cross-Appellee, the State claims not only that the Court of Special Appeals's remand order was limited to the Asia/alibi issue but that the remand order had to be limited to the Asia/alibi issue based upon the law of the case doctrine. Here's the pertinent portion of the State's  Reply Brief: 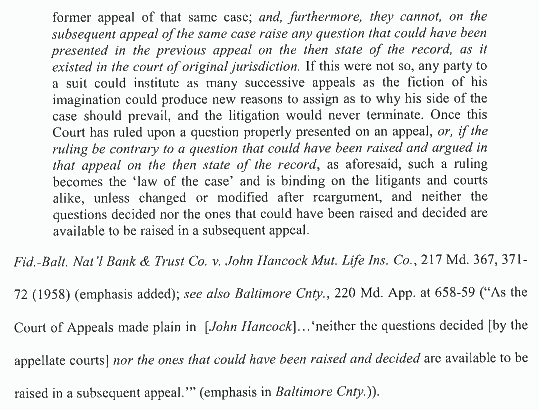 So, does the State have a winning argument on this issue?

Is the State Right That the Right to the Effective Assistance of Counsel is Distinct From the Right to Counsel?

In his opinion granting Adnan a new trial, Judge Welch cited to Curtis v. State, 395 A.2d 464 (Md. 1978), which held that (1) the right to counsel is a fundamental right; (2) fundamental rights require "intelligent and knowing" waiver; and (3) Curtis did not intelligently and knowingly waive his claim of ineffective assistance of counsel. Judge Welch then found that Adnan had similarly not intelligently and knowingly waived his claim of ineffective assistance of counsel with regard to the cell tower evidence.

The State has tried to distinguish Curtis, claiming in its Brief of Appellant that "Curtis dealt with a total abandonment by counsel...." In its new Reply Brief and Appendix of Cross-Appellee, the State tries to strike a similar chord, but is its argument convincing?