Yesterday, the State filed its Reply Brief and Appendix of Cross-Appellee in the Adnan Syed case. This is the last brief before oral argument in the Court of Special Appeals of Maryland on June 1st. It's also the first (and only) time before oral argument that the State is addressing the issue of whether trial counsel was ineffective based upon failure to contact prospective alibi witness Asia McClain; the State didn't address this issue in its first brief.* So, how did the State do?

Let's start with the basics. On the ineffective assistance/alibi issue, Judge Welch made factual findings and legal conclusions. First, the Court of Special Appeals is exceedingly unlikely to reverse any of Judge Welch's factual findings. Did Adnan's trial team fail to contact Asia McClain? Was Asia McClain a credible witness? Were there security cameras in the library? At the reopened PCR proceedings, Judge Welch saw witnesses testify on each of these factual issues and answered each of these questions in the affirmative. By way of contrast, the three judge panel of the Court of Special Appeals was not in the courtroom for this testimony. It can read the transcript of the proceedings but cannot assess the demeanor of these witnesses.

This is why the Court of Special Appeals won't reverse any of Judge Welch's factual findings unless it finds them to be clearly erroneous. As I noted in a prior post, that court found in State v. Brooks, 812 A.2d 342 (Md.App. 2002), that

In other words, it's exceedingly unlikely that the Court of Special Appeals will reverse any of Judge Welch's factual findings.

Of course, Judge Welch made one legal conclusion that supported the defense and one legal conclusion that supported the State. To prove ineffective assistance on the Asia/alibi claim, Adnan needed to establish that (1) trial counsel unreasonably failed to contact Asia McClain; and (2) this error was prejudicial, i.e., undermines our confidence in the jury's verdict. Judge Welch found for the defense on prong one and the State on prong two.

Notably, in Grooms, which Judge Welch cited extensively, the Eighth Circuit created the key dichotomy that controls this case. According to the court in Grooms, there's a fundamental difference between (1) investigating/contacting alibi witnesses and making the strategic decision not to call them to the witness stand; and (2) failing to investigate contact alibi witnesses, which is unreasonable. Simply put, "[o]nce a defendant identifies a potential alibi witness, it is unreasonable not to make some effort to contact [the witness] to ascertain whether their testimony would aid the defense."

This then takes us to the two legal citations the State makes on this issue: 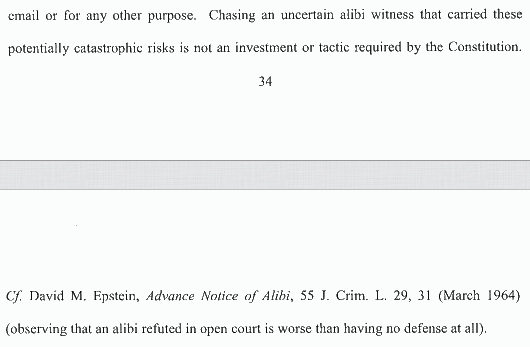 Let's start with the legalese. "A 'cf.' citation means that the cited authority supports a proposition different from the main proposition, but that is sufficiently analogous to lend support." Sulyma v. Intel Corporation Investment Policy Committee, 2017 WL 1217185 (N.D.Cal. 2017). Therefore, the only two legal authorities cited by the State on prong one do not directly support the argument that it's making.

Next, let's look at the date of both of these legal authorities: 1964 and 1981. Indeed, the footnote attached to the relevant conclusion in the 1964 law review article cites to a 1931 law review article. These dates are important because the Supreme Court changed the legal standard for ineffective assistance of counsel claims in its 1984 opinion in Strickland v. Washington, 466 U.S. 668 (1984). This is important because the Court of Appeal of Maryland in State v. Tichnell, 509 A.2d 1179 (Md. 1986), reversed a PCR court's ruling because "it relied upon the pre-Strickland cases of Ward v. State...and State v. Lloyd...as containing the law applicable to Tichnell's claim of ineffective assistance of counsel."

Finally, both of the State's citations miss the mark because they fail to address the Grooms dichotomy. The point of Grooms is that trial counsel can't make a determination of whether an alibi witness will offer perjured testimony and/or be refuted in open court without first investigating/contacting that alibi witness. Of course, the State spends a good part of its brief arguing that there is evidence that the defense did investigate Asia McClain, but that's factual argument, and, again, it's exceedingly unlikely that the Court of Special Appeals will reverse Judge Welch's factual conclusion that Asia was not investigated/contacted.

This then takes us to prong two, the prejudice prong. In its Brief of Appellee/Cross-Appellant, the defense (1) noted that Judge Welch cited no precedent in support of his legal conclusion on prejudice; and (2) cited several cases in support of the proposition that failure to contact an alibi witness who covers the time of the crime is prejudicial. Indeed, the defense even cited Clickscale v. Carter, 375 F.3d 430, 445 (6th Cir. 2004), where the Sixth Circuit found that failure to contact an alibi witness who merely would have corroborated an existing alibi defense was prejudicial. 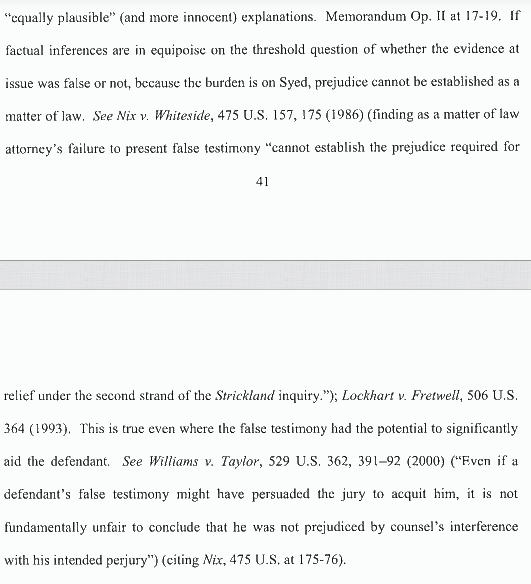 I find this line of argumentation to be baffling. Judge Welch manifestly did not find that the factual inferences were in equipoise on the threshold issue of whether the Asia alibi was false. Instead, Judge Welch concluded that "adopting the State's theory that Petitioner fabricated the alibi based on McClain's March 2, 1999 letter and the detective's interview notes of Gordon would require the Court to retroactively supply reasoning that is contrary to the facts and the law."

And therein lies the fundamental problem with the State's arguments on the alibi issue: They are all dependent upon the Court of Special appeals reversing Judge Welch's factual findings. The law cited by the State only comes into play if the Court of Special Appeals believes that Asia was lying. But Judge Welch found that she was honest, and that finding won't be reversed unless the court believes this finding was clearly erroneous. Barring that, the State's cited precedent is irrelevant.

*This wasn't an oversight by the State. It had to wait until the defense raised this issue on cross-appeal before responding to it.

Man, I understand why lawyers and ethicists don't want to overturn convictions. It look st words like "equipoise". I had to look it up and I not a person with a tiny vocabulary. It's not a word I know and I could only guess what it meant from context. How can anything stand permanently when we can't even use words clearly.

I'm guessing the prejudice issues case-wise are why the state went for the 'mountain of evidence' approach again? What are your bets on Welch being overturned on this aspect?

Megan: And the problem is that it’s clearly the wrong word for this situation. Judge Welch very much found that the evidence was not in equipoise.

Cupcake: I think there’s a very good chance that the Court of Special Appeals and/or the Court of Appeals overturns the prejudice prong of the alibi/IAC claim.

I first learned of word "equipoise" by hearing it in the lyrics to "Fugue for Tinhorns" from Guys and Dolls when I was in sixth grade. I still find it disappointing that it has nothing to do with horses.

Colin,
What are your thoughts for the potential for the COSA to remand back down to the lower court to hear the Sister’s testimony?
If they decide to overturn Welch on the waiver issue and the issue hinges on the Asia issue, surely in the interests of justice they should remand it so that the sisters are allowed to testify.
This is afterall not your normal post-conviction proceeding given that Asia was allowed to testify after listening to a podcast and coming forward. Similarly, the sisters only came forward after hearing in the media that Welch had overturned Adnan’s conviction. On the day they heard the news, the sisters contacted Asia via facebook to tell her what a liar she was. Following this, they contacted the attorney general’s office to advise them of what they know. It is clear they didn’t want to come forward earlier because it may not have been necessary and I would imagine they were afraid of Rabia’s tribe.

ben: I've noted before that the State can't file a motion to reopen a postconviction proceeding:

Therefore, I don't see how COSA could remand so that the State could move to reopen and have the sister's testify. That's the proper procedure COSA applied with the defense and Asia, but that procedure is seemingly unavailable to the State.

417407299
Ben- the reason it doesn't make sense to you and the other guilters is because Lin like the court, you are starting with the prima facie assumption that Asia is lying, and that she wasn't convinced not to testify by Urick who then went on to lie about what she had told him.

The court didn't immediately believe she was telling the truth either, but rather went in with an open mind considering "why would this woman lie about this? It makes sense why Urick would lie, if that's what happened, but why would Asia lie in such a manner?" Welch then made the finding that she was credible.

See the key thing you are entering the equation with is the desire to arrive at your preferred conclusion, the one which you entered with. In that sense, whether it makes sense that Asia lied about what happened between her and Urick is much less important. Indeed it does make little sense the scenario, but as it's the only real possibility that allows you to still reach your original preferred conclusion, it simply stands.

The court doesn't have any of these hang ups however, and simply applied the law and makes sensible factual conclusions based on logic.

That's why the court remanded so Asia could testify, but won't do so for the sisters. If you still don't get it, start over from Colin's legal explanation and pretend as if you weren't sure if Urick lied about what Asia said--then I think it'll make much more sense to you.