This is the big one. At the reopened PCR proceeding, in its Application for Leave to Appeal (ALA), and in its Brief of Appellant, the State has advanced a consistent theme: Even though Cristina Gutierrez did not use the AT&T disclaimer, she was effective because her attacks on the cell tower evidence produced a blueprint for cross-examination that continues to be followed today. Here's the pertinent language from the ALA:

And here's the corresponding language from the Brief of Appellant:

This argument from the State was dependent upon Gutierrez's master stroke of procuring a limiting instruction informing jurors that the cell tower pings were only evidence that could be used to corroborate (or dispel) Jay's testimony and not independent evidence of the location of Adnan's cell phone. As the State noted in its Brief of Appellant:

Thereafter, in what I characterized as a "legal bombshell," the defense responded in its Brief of Appellant that the Emperor had no clothes: While the trial judge recognized the potential prejudice associated with the cell tower evidence and asked the parties to craft proposed limiting instructions, the defense possibly ever never crafted a draft limiting instruction and definitely never objected to the judge failing to give such an instruction. So, how did the State respond to this revelation?

It's immediately apparent what's missing from the State's new Reply Brief and Appendix of Cross-Appellee: The State's familiar argument about Gutierrez creating the blueprint for attacking cellphone evidence is gone. If the State were wise, that absence would be permanent because it's now missing its bedrock. The State needed that limiting instruction to advance its argument. The fact that Gutierrez didn't get one turns her proffered master stroke into a coup de grâce against this claim.

In an attempt to divert the court's attention from this failure, the State relegates discussion of the limiting instruction to a footnote:

In making this argument, however, the State misses several other instances where the State clearly claimed during closing that the pings were independent evidence of the location of Adnan's phone. Here's what I consider to be the most important example: 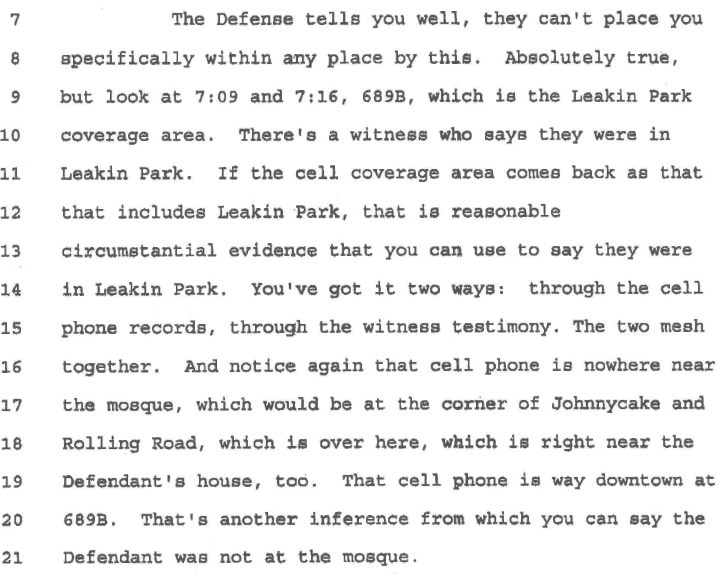 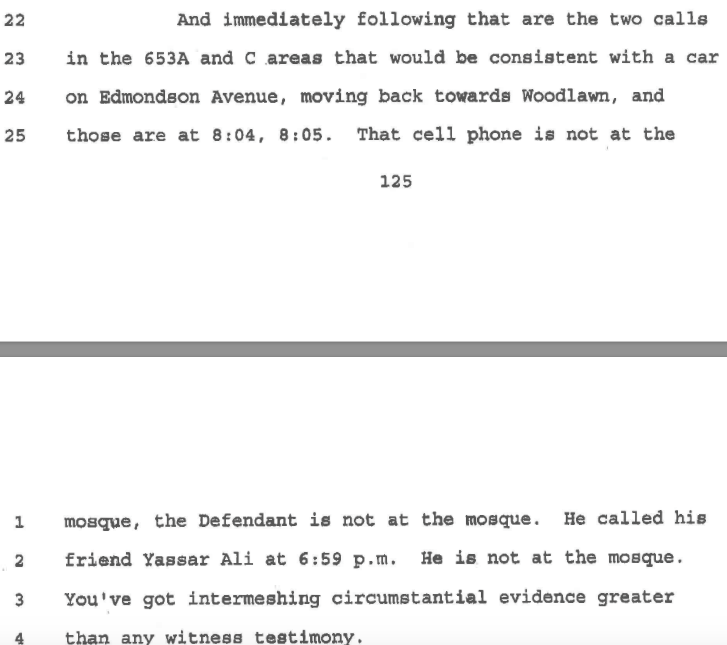 This is pretty much a textbook example of the line of argumentation that would have been precluded pursuant to the limiting instruction. The prosecution only should have been allowed to say, "Jay testified that X (e.g., we are in Leakin Parkin the 7:00 hour), and his claim is corroborated by the cell tower pings."

Instead, the prosecution said, "If the cell coverage area comes back as that that includes Leakin Park, that is reasonable circumstantial evidence that you can use to say they were in Leakin Park." That is using the pings as independent evidence of location (Leakin Park), not simply as corroborative evidence. This becomes even clearer in the next sentence, when the prosecution says, "You've got it two ways: through the cell phone records, through the witness testimony." This "two ways" language is important. It makes clear that the prosecution is saying the cell tower evidence stands alone; it does not merely corroborate Jay's testimony.

The prosecution then follows up by saying that "the cellphone is nowhere near the mosque....The cellphone is way downtown at 689B." This is an explicit example of the prosecution directly saying that a ping proves both where they phone was and where it wasn't. And then, in the second paragraph, the prosecution repeats this claim again, saying, "That cell phone is not at the mosque." These are all statements that could not have been given if Gutierrez had secured the limiting instruction, and there's no reason to believe that the jurors only used the pings as corroborative evidence.

So, where does that leave us? The failure of Gutierrez to secure a limiting instruction is pretty devastating to the State's attempt to refute Judge Welch's findings of both (1) unreasonable performance; and (2) prejudice. As a result, I have a pretty hard time imagining Judge Welch being overturned on the substance of his ineffective assistance/cell tower conclusions. But what about the threshold issues of scope and waiver? Those are closer calls, and I'll get to them in future posts.

This clause confused me:

"… the defense possibly ever crafted a draft limiting instruction …"

I'm guessing "ever" was supposed to be "never" and you meant "the defense might never have crafted a draft limiting instruction"?

Maybe limiting instructions don't have enough impact when given, but that she whiffed on this seems to me like it's very close to being an IAC claim all on its own (or might in fact potentially be one). It certainly makes a very cumulative-IAC-friendly impression, on me at least.

Cathy: This is talking about what happened at Adnan’s trial back in 2000 to measure the prejudice resulting from Gutierrez not using the disclaimer to establish that incoming pings are unreliable for determining location.

pluscachange: It can’t be raised as an independent issue, but it certainly has bearing upon the other IAC claim(s).