This first post deals with what I see as the biggest legal bombshell in the defense brief. Let's start with the basics. Judge Welch found that Adnan received the ineffective assistance of counsel because (1) his trial counsel unreasonably failed to use the AT&T disclaimer to cross-examine the State's cell tower expert; and (2) this error was prejudicial, i.e., undermined Judge Welch's confidence in the jury's verdict.

In it's Brief of Appellant, the State's very first argument regarding prejudice went as follows:

This argument is correct. Here is some of the pertinent discussion of the issue between the judge and prosecutor Kevin Urick at trial: 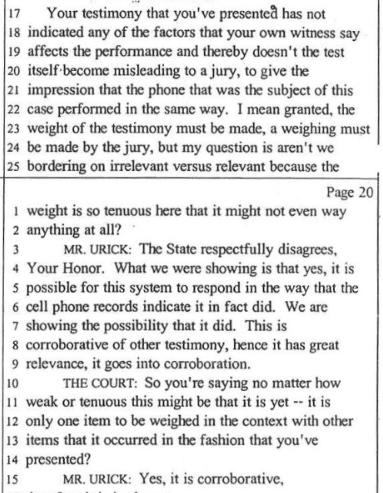 Based upon this colloquy, the judge asked both the prosecution and defense to craft their preferred versions of a limiting instruction that she would give to the jury at the close of the case:

So, what's a limiting instruction? Maryland Rule of Evidence 5-105 states that

In this case, then, a limiting instruction would have communicated to the jury that the testimony of the State's cell tower expert was only admissible to corroborate Jay and not admissible as independent evidence regarding (1) the (possible) location of Adnan's cell phone; and/or (2) Adnan's guilt. Cf. State v. Bethea, 585 A.2d 1235, 1238 (Conn.App. 1991) ("[T]he court must give limiting instructions to explain that the evidence is not offered to prove the truth of the matter asserted but only to corroborate and accredit the prior testimony of the victim.").

This then takes us to the bombshell in the Brief of Appellee/Cross-Appellant: The jury at Adnan's trial was never given such a limiting instruction: 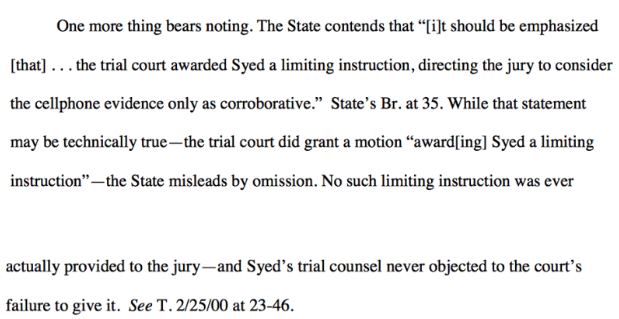 Simply put, this is huge. The judge explicitly recognized that the cell tower expert's testimony about the location of Adnan's cell phone was tenuous and had the capacity to mislead the jury; therefore, she allowed the State to admit it with the understanding that the jury would be specifically instructed that the testimony was only evidence to corroborate Jay and not independent evidence of Adnan's guilt or the location of the phone.

But then...the judge never gave such an instruction, and the defense never objected to this failure.* Therefore, there is every reason to believe that the jury did consider the cell expert's testimony as independent evidence of Adnan's guilt and the location of his cell phone. Given this, it's pretty hard to see the Court of Special Appeals reversing Judge Welch's prejudice conclusion.

I also think, though, that this issue has strong bearing on the "unreasonable performance" prong of the ineffective assistance test. Given the importance of the cell tower pings, which Judge Welch determined to be "the crux" of the State's case against Adnan, how in the world did trial counsel drop the ball on the limiting instruction? That instruction was as important as the AT&T disclaimer, if not more important, and yet trial counsel somehow failed to make sure it was given at the close of the case.

The best analogy I can draw is to a case out of the Fourth Circuit (the federal circuit that covers Maryland) that I use in my Criminal Adjudication class: United States v. Luck, 611 F.3d 183 (4th Cir. 2010), in which defense counsel failed to request an "informant instruction" regarding the unreliability of informant testimony. In finding ineffective assistance, the Fourth Circuit concluded that

there is no indication that failing to request the instruction had any root in trial strategy. Luck's counsel cross-examined both Thompkins and Johnson about the consideration they received from the government for their investigation and testimony. In general, Luck's counsel's defense strategy seems to be focused on discrediting the government's witnesses, rather than offering his own explanation of the events. Thus, were we to hold that failing to complete the strategy and request an informant instruction was a tactical decision by counsel, we would "conjure up [a] tactical decision[ ] an attorney could have made, but plainly did not." Griffin v. Warden, 970 F.2d 1355, 1358 (4th Cir.1992)

*I don't know whether the defense ever submitted her preferred version of the limiting instruction.

I was just about to ask the question you answered in your footnote.

Question: Would this omission, in and of itself, support a finding of IAC against CG? If yes, would this be considered a waived claim (since it is based on the trial record, which Adnan's attorney's have had for a long time? If it has been waived, is this the type of waiver that could be exused by the Court?

Finally a bombshell from Colin! Who discovered this??? I'm so excited!!!

Layman question: Is there a big difference to a jury between corroborating Jay and corroborating Adnan's phone location? Jay said where Adnan was.

Wow, that's a pretty incredible find by Justin. Kudos to him! Also, I thought it was pretty outrageous how often the State used phrases like "overwhelming evidence" or "mountain of ... evidence" and so on. Sounds to me like they might be compensating for something =)

Michael: Syed should just move to amend his PCR petition tomorrow and include this new IAC claim. Based on Syed’s brief (p.17), because COSA has not yet ruled on the merits of the appeal, Syed's petition can still be amended. Then, I guess the appeal would be put on hold while Judge Welch considers that new claim, and then the losing party can file an ALA, and then COSA can decide whether to hear that issue along with the already-partly-briefed issues on appeal now. Does that sound right, Colin?

Michael: (1) I’m not sure whether failure to make sure a limiting instruction was given has ever been grounds for an independent finding of IAC; (2) The issue was likely waived on direct appeal because it was an error that was evident from the trial record; (3) COSA could excuse the waiver; and (4) I don’t think that 1-3 really matter.

Paul: It’s a big difference. The judge should have instructed the jury that it could only use the pings to corroborate Jay’s testimony. Then, the State would have argued that some of the pings, like the Leakin Park pings, corroborated Jay at key points on January 13th. In response, the defense would have argued that the majority of pings, like The Nisha Ping, contradicted Jay at key points on January 13th. And that’s it. Jay’s story would have been somewhat corroborated but mostly dispelled.

Instead, the prosecution argued that the Leakin Park pings were “reasonable circumstantial evidence that you can use to say they were in Leakin Park” and that the “cell phone is nowhere near the mosque.” The defense, of course, should have objected to this statement, but the additional point is that the limiting instruction would have told the jury that they couldn’t engage in that line of thinking.

Kevin: Those are fairly typical arguments in response to an IAC given the requirement of proving prejudice.

Sam: The defense would have to get another remand to add the issue, and, as I noted in response to Michael, the issue will likely get good consideration regardless of whether it is an independent issue. The downside of seeking another remand is that it likely means the sisters could testify, and, right now, the Asia/IAC issue looks pretty strong. I wouldn’t want to open Pandora’s Box.

I haven’t had time to read the brief so when I read this my jaw literally dropped. I just can’t see a way the State could squirrel out of this one…it seems pretty clear the cell phone evidence was to be presented only as a means of supporting Jay’s testimony and instead was allowed to be weighed however the jurors felt. Question: whose responsibility is this typically? Should the Defense/State have reminded the judge, was it the judge’s to assure it was followed, is it a clerks?

Was this one of 'the' bombshells?

Colin: Well, I can understand how that would be a typical argument in trying to dispute prejudice, but it just seems kinda ridiculous in the context of this particular case. If what they have against Adnan is the standard for "overwhelming evidence", then I have absolutely no faith in the criminal justice system anymore... It just seems so wrong.

Colin, this news is incredible! However... gulp, I just listened to a Karas On Crime podcast (hosted by Beth Karas) in which she had Ben Levitan (a nat'l expert in cell phone/tower technology) on (this was from Aug. 2016) and he spoke about Adnan's case and said that the AT&T disclaimer was meaningless, that the records (he stated he examined them all) were completely reliable, and that the later testing done on the cell towers was inaccurate as AT&T had since upgraded the system from 2G to 3G (i think). Wondering if you have heard Levitan's opinion and if you have any concerns about that? Thanks!

Laura: It’s the judge’s job to give the instruction but the defense’s job to make sure she gives it.

Kevin: It’s boilerplate. Any time the court is doing a prejudice analysis, the State will claim that the evidence was overwhelming, meaning any error was harmless.

Anonymouse: That analysis is correct. The defense could, for instance, point to Gutierrez’s statement about not caring to look at Exhibit #31 but couldn’t point to new, non-record evidence or make a novel legal argument.

Sophie: I haven’t listened to it, but that doesn’t sound right to me. In he Bulos Zumot case, an AT&T radio frequency engineer testified that there was an issue with incoming pings: http://lawprofessors.typepad.com/evidenceprof/2016/02/last-night-we-had-another-special-minisodeof-the-undisclosed-podcast-based-on-the-second-day-of-the-reopened-postconviction.html.

I think in this situation it doesn't matter if we can now say the disclaimer was meaningless...when the trial was occurring, there was a disclaimer that blatantly said incoming calls aren't reliable, and Defense did nothing. This isn't a case of "If it was tried now what would happen" it's "Did he get a fair trial back then"

That being said, even if they're like "Yep incoming calls are reliable" it doesn't really matter since 1) Some calls 100% contradict the timeline and 2) Just because a cell tower picks up a call does not mean it was the closest cell tower...it can't REALLY be used to prove where someone was

In Serial season 1, I remember Sarah Koenig talking to a juror from Adnan's trial. The juror said she really had wanted to hear from Adnan. It sounded like she held that against him, even though jurors are instructed not to do that. From having served on a jury myself many years ago and sitting through jury duty questioning many times over 30+ years, I wonder if all — or even most — jurors would understand a limiting instruction, much less follow it. I wonder if I would have understood it if I had not listened to the past two seasons of Undisclosed. Jurors come from all education levels and backgrounds and most do not process information like lawyers. I wonder if judges and attorneys understand that.

You need to narrate your blogs. I love the way you talk about the law. You can hear your passion for it in your tone!!

Laura: Right. The question of whether the disclaimer ended up being meaningless is irrelevant to the current claim of IAC. But it could be hugely relevant at trial #3 or during plea bargaining before a potential trial #3.

From someone who is not a native English speaker, and have somewhere from limited to none American law knowledge, I love your reviews!
With your help I am able to follow up on what is happening with Adnan's case.

Sitting here remembering that during Serial, the trial judge took to her facebook page to reassure the world that she was sure the jury got it right. And here you are telling me she FORGOT to give that crucial instruction. I think that together, those two things mean the judge herself didn't follow the trial very closely.

Whatever happened to this? Will the argument make it into the Supreme Court cert petition?