Is the State Right That the Time, Duration, and Sequence of Dialed Numbers Corroborated Jay?

In order to find ineffective assistance of counsel on the cell tower issue, Judge Welch needed to find (1) unreasonable performance; and (2) prejudice, i.e., a reasonable probability of a different outcome at trial if Gutierrez had cross-examined the State's cell tower expert with the AT&T disclaimer at trial. In its Brief of Appellant, the State spends a good deal of time arguing against unreasonable performance, but it doesn't spend much time arguing against prejudice. The State's prejudice argument is about a page and a half: one paragraph on page 34, all of page 35, and one paragraph on page 36.The heart of the State's argument is as follows:

So, is the State correct that the time, duration, sequence, and dialed numbers on Adnan's call log reinforce the veracity of Jay's testimony?

I'm not going to do an exhaustive post on each call; instead, I'm going to focus on the six calls from the critical period between 2:36 P.M. and 3:59 P.M.: 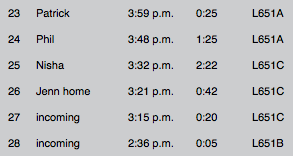 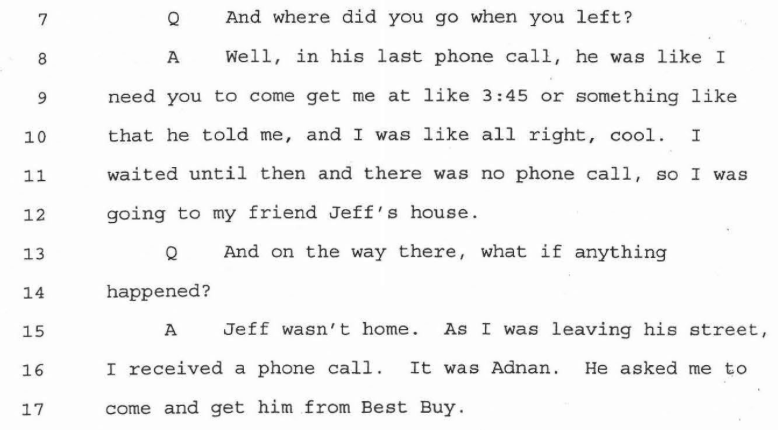 Jay doesn't even mention the 3:21 call to Jenn, The Nisha Call, or the Patrick call in his first recorded interview. In his second recorded interview, he places The Nisha Call before the Patrick call, but Adnan's call log shows that the call to Nisha was at 3:32 while the call to Patrick was at 3:59 P.M. Furthermore, Jay never says that there was an incoming call at 3:15 P.M., and he never gives a description of the call to Phil or any call between The Nisha Call and the Patrick call. Therefore, the call log shows that Jay's sequence of calls is wrong and that Jay has omitted two calls during this critical timeline, three if we're concluding that neither the 2:36 call nor the 3:15 call was the "come and get me" call.

If we're working with the State's claim that the 2:36 P.M. call was the "come and get me" call, a 5 second call is insufficient for Adnan to communicate to Jay that Hae is dead, that he is at Best Buy, and that Jay needs to come and get him. Again, Jay never describes the 3:15 P.M. call, and Judge Welch has found that this couldn't be the "come and get me" call. According to Jay, the 3:21 call was him asking Jenn if Patrick was home; I don't think he ever described the duration of that call.

As for The Nisha call, Jay initially says it was 7-8 or 10 minutes. Of course, this conflicts with the 2:22 duration of the call. Later, at trial, Jay implies that the phone call was shorter, but I don't think he ever states a specific duration.

Again, Jay never describes the Phil call, so he is never asked about the duration of that call.

Finally, as for the Patrick call, Jay says,

Um, the machine it a'll ring 4 or 5 times before the machine a 'll pick up. There' s a long song on there. Um, then his sister comes on, maybe like 4 minutes.

Four minutes is not close to a match to the 25 second duration of the call.

The State's argument here doesn't withstand scrutiny. And you don't need to take it from me. In finding lack of prejudice on the Asia/alibi issue, Judge Welch concluded,

*This 3:40ish timeline is roughly consistent with the prior statements by both Jay and Jenn.

**The story in Jay's Intercept interview is another matter.

This seems like a particularly difficult argument for the state to make in light of Welch's findings about the timeline, IS IT NOT?

I Ann an avid listener of undisclosed and reader of ur blog. One thing that troubles me as a layperson is that we never really get the perspective of the prosecutor on these cases. It seems that based on common sense and a desire for justice, adnan, joey Watkins, and Huggins are clearly innocent. I would hope that a prosecutor would have a desire for justice, admit they have the wrong person in jail, and let these men go free.

What is the logic behind prosecutors continuing to pursue appeals, etc with the goal of upholding what seem to be wrongful convictions? Maybe u can do an addendum on undisclosed on this issue?

Hi Colin. Thank you so much for your thorough explanations of the various filings by both the State and Syed. This is so very helpful for all of us non-lawyers who are trying to understand the process.

I just read the latest Brief of Appellant from the State. They seem to suggest that the ATT cover sheet issue was raised by Syed when it was discovered by Susan 15 years after Syed’s conviction. However, wasn't it the State that raised the issue of the call log at the PCR in response to Asia’s assertion that she was with Adnan in the library at the time of the 2:36 “come and get me” call? Didn't they say that they could have offered up the 3:15 incoming call as an alternative? Didn't that assertion open the door to questioning the reliability of the call log as it applies to location based on incoming calls? Are they not insisting that they can have their cake and eat it too by using the call log to offer alternative theories of the timeline of the crime, but then denying Syed’s use of the call log to nullify the State's theory of the crime?

2. On page 20, foot note #2 appears to state that Syed cited Kulbicki to justify his belated supplement to bolster his ineffective assistance claim. Was it not the State that cited Kulbicki?

Thanks so much for your clear and concise explanations of the law. I’ll bet you are a great teacher.

Michael: Right, and, if they do, it makes the Asia/IAC claim much stronger.

Teeter: I would love to have a prosecutor on at some point.

Jackie60: (1) Yes, that's correct, and it's an argument I expect the defense to make. (2) Yes, Kulbicki is interesting from a waiver perspective.