Was the "Come & Get Me" Call the Linchpin on the State's Case Against Adnan?

Having focused on the State's Brief of Appellant in the Adnan Syed over the last two weeks, I wanted to turn my attention to the upcoming Brief of Appellee, which is scheduled to be filed by March 29th. In addition to responding to the State's Brief of Appellant, the Brief of Appellee will also allege that Judge Welch erred in his ruling on the Asia/ineffective assistance claim. Specifically, the defense will argue that (1) Judge Welch correctly concluded that trial counsel acted unreasonably in failing to contact Asia McClain; but that (2) Judge Welch incorrectly concluded that this error was not prejudicial, i.e., does not undermine our confidence in the jury's verdict.

Judge Welch found that the failure to contact Asia McClain was not prejudicial based upon two interrelated points: (1) the State's presented a relatively weak theory as to the time of Hae's murder; and (2) contacting/calling Asia as an alibi witness would not have undermined the crux of the State's case, which was the convergence between Jay's testimony about Hae's burial and the Leakin Park pings. Here was Judge Welch's discussion of the first of these points: 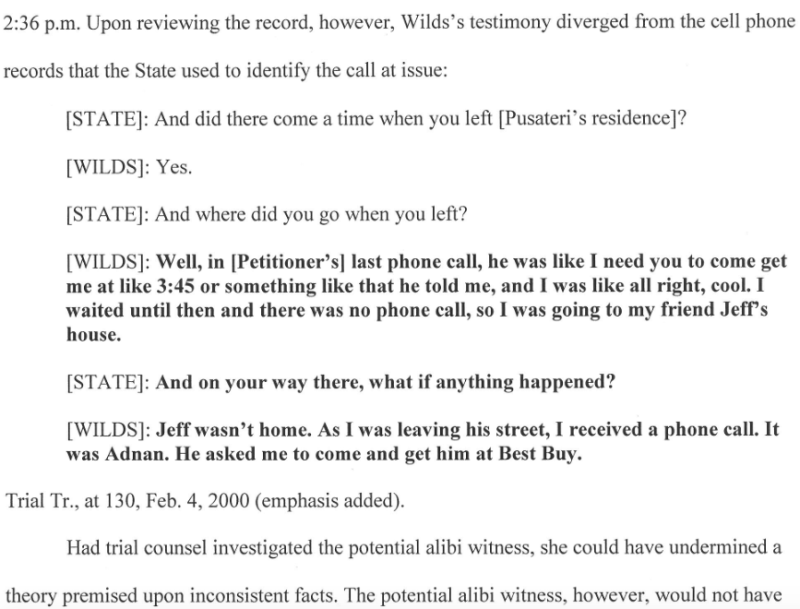 I generally agree with Judge Welch part of his analysis: The State presented a relatively weak theory as to the time of Hae's murder because it was a theory premised upon inconsistent facts. As I've noted before, though, I don't necessarily see how this cuts against a finding of prejudice. Specifically, in In re Parris W., Maryland's highest court found prejudice under similar circumstances, concluding that:

Given the distance between Ms. Cary's home and the place where [the victim] was assaulted, and given the uncertainty surrounding the time of the assault, Ms. Cary's testimony alone may have been enough to create reasonable doubt in the mind of the hearing judge had she been available to testify.

On the other hand, I understand Judge Welch's point that the theory that Hae was killed by 2:36 P.M. was weak and based upon inconsistent facts. Therefore, one argument is that evidence contradicting this weak theory -- the Asia alibi -- shouldn't undermine our confidence in the jury's verdict because the jury probably didn't put much stock in the State's "time of death" argument.

But I think we should look at the case from a different perspective. For me, the key point is that the "come and get me" call was the linchpin of the State's case. The State's broader theory of the case was that Adnan was guilty of first-degree murder based upon kidnapping by fraud. Specifically, the State sought to prove that Adnan planned to loan Jay his car and cell phone so that he could ask Hae for a ride and then call Jay on his phone to pick him up after killing Hae at the end of the ride. Here's prosecutor Kathleen Murphy describing this theory to the jury during closing arguments: 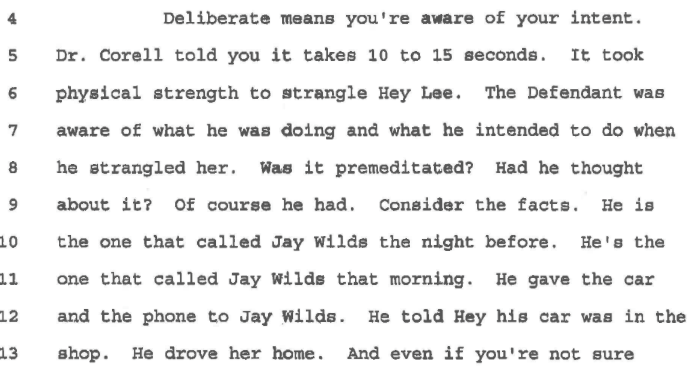 So, this explains why the State went with option 1 3: It had no other options. It needed a "come and get me" call to Adnan's cell phone to prove its theory of the case, and the 2:36 P.M. call was the only call that made any sense. Unfortunately for the State, Asia's alibi covers a 2:36 P.M. call.

Judge Welch's conclusion was that the State presented a weak/inconsistent theory on this point, meaning that an alibi witness wouldn't have moved the needle much for the jury.

My response is that the State did present a weak/inconsistent theory on this point, but also, as noted, that this point was the linchpin of the State's case. If there wasn't a workable "come and get me" call to Adnan's cell phone, the jury shouldn't have been able to agree with the State's kidnapping by fraud theory of the case. If you pull out that linchpin, the State's case falls apart, which is why the defense has a pretty good prejudice argument on appeal.

Are you saying that the kidnapping by fraud conviction makes Asia's absence "more prejudicial" than it would be without that conviction?

Michael: Yes, exactly, because the theory of that conviction hinged on the borrowing of the car and cell phone so that the "come and get me" call could be made to the latter.

Besides the arguments about the merits, or lack thereof, of the three possible timelines, Colin, can you comment on how 'proper', legally and morally, it is that a case can be made using the choice of facts that are judged better to arrive at a desired outcome? I know vanishingly little about the law in the US, but I can't get my brain around that kind of brazen expediency, yet it seems to be tolerated as nothing.

This demonstrates how, as a layperson, I can focus on perhaps the less important points, at least in the appeals process. I had thought that the strongest argument for Asia's testimony being prejudicial was the pros. argument in summation that the cell phone evidence and Jay were mutually supporting. With only one, there might be reasonable doubt. Yet Asia demonstrated that the afternoon timeline of Hae's death was impossible, calling into question Jay and the interpretation of the afternoon's events. About the only certainty was that Hae was either dead or incommunicado by 4 pm or so because of the late pickup at the childcare center. Yet if Adnan was still at the high school close to 3:00 p.m. with no ride ... No, it does not seem possible. I always assumed that the premeditated part of the accusation/conviction was because no possible unplanned scenario could accommodate these tight timelines. Without Adnan, they had no suspect, given the boyfriend's "alabi," and no evidence. But the cell phone had to be used in planning and execution of the crime; which was not a spontaneous event. Now you are underlining out that the 2:36 pm call had even more significance than I would have guessed, or ever gave attention to. Yet given that what is being appealed is trial testimony, not actual facts, It seems that I was focusing on a side issue.

Hal: I think both are important. With Asia’s testimony, the State’s timeline is impossible, and there is also no call that makes sense as the “come and get me” call.

NavyMom: Which statement is that? Are you referring to Jay’s statement to the detectives before they went before the grand jury?

I think NavyMom is referring to Kathleen Murphy's explanation of premeditation at trial that you quoted above. At the end she says "He drove her home." What IS that about.

I completely agree that the presence of a viable CAGM call in those records is absolutely fundamental to the state's case. It's the deus ex machina of Jay's testimony, pretty much. Without it, there's no reason for him to know anything about what happened at all. He'd be effectively uninvited from the crime, in narrative terms. There would be no story left.

I don't see how that couldn't be potentially decisive.

Yes, the prosecutor's theory above. He drove her home....
what was that all about??

Cathy and NavyMom: Interesting. We know, for instance, that Krista, the first person who mentioned the ride request, said it was for a “ride home.”

I wonder if that has anything to do with what Murphy said.

pluscachange: I see it as follows: The State proved first-degree murder under a theory of kidnapping by fraud. Kidnapping by fraud/first-degree murder required the prosecution to prove beyond a reasonable doubt that Adnan used deceit to get a ride from Hae so that he could kill her at the end of the ride. The way that the prosecution proved such deceit was to show that Adnan loaned his car and phone to Jay so that (1) it would appear that he needed a ride from Jay; and (2) he could call Jay after the murder so that he could ditch Hae’s car and get a ride back to school from Jay. And, even though Jay testified that the “come and get me” call was at 3:40ish, the prosecution argued during closing that this call was the 2:36 P.M. call, with Adnan presenting no alibi to rebut this 2:36 P.M. timeline (the 3:40ish timeline was impossible given no incoming calls between 3:15 and 4:27 P.M.).

I think that both possibilities are plausible, which undermines my confidence in the jury’s verdict. You’d have to conclude that (1) is not plausible to reach the opposite conclusion, legally speaking.

What about (3) jury would have returned a guilty verdict for first degree murder but aquitted on kidnapping by fraud?

Michael: That was my first thought, too. Then I realized that 2/3 of the state's evidence would collapse if Adnan had nor planned to murder Hae. Then they would just be left with Jay testifying to the burial. I don't know what limits could be placed on the jury verdict, however.

I asked this in other places and haven't seen a explanation yet: Why aren't the incoming calls to Adnan's phone on 1/13 identified? Did the State identify incoming calls to others during the case? If so, isn't it very suspicious/revealing that they decided not to include that information? If the CAGM call didn't come from Best Buy, the whole case is rubbish.

@Paul The incoming calls numbers were not requested by LE at the time. (Some say it was not possible to access this information, though this is debateable.)