there's a good argument that the State's waiver argument in the Adnan Syed case is a non-starter. If that's true, the only possible procedural ground for overruling Judge Welch's order granting a new trial would be a finding that Judge Welch exceeded the authority granted to him by the Court of Special Appeals (COSA) in its remand order by allowing Adnan to supplement his Asia/ineffective assistance claim with the cell tower/ineffective assistance claim.

In its Brief of Appellant, the State begins by noting that 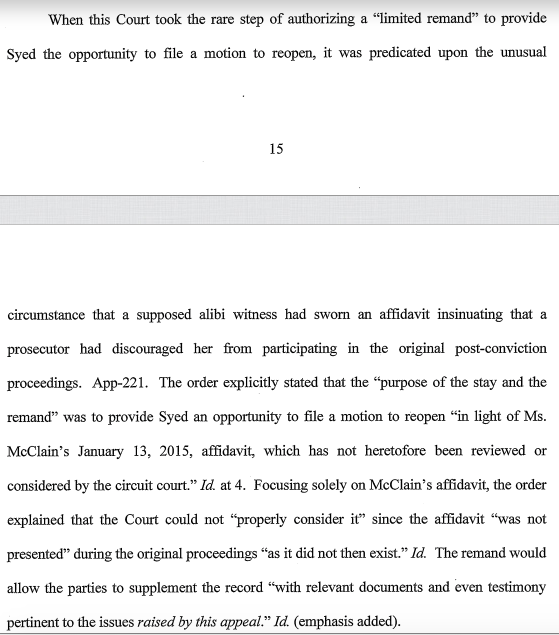 This then leads into the State's argument, which is that The controlling case on the issue was decided less than a year ago. In State v. Adams-Bey, 144 A.3d 1200 (Md. 2016), James Leslie Adams-Bey, Jr. was convicted of first degree rape and related offenses. After he unsuccessfully filed for postconviction relief, Adams-Bey "moved pro se to reopen his postconviction proceeding on the ground that the jurors at his criminal trial were given advisory only instructions in violation of his constitutional right to due process of law." In response, the Circuit Court denied his motion to reopen without holding a hearing.

Adams-Bey then appealed to the Court of Special Appeals of Maryland, which found that the Circuit Court abused its discretion,

Later, the Court of Appeals of Maryland affirmed this decision, concluding that

"Abuse of discretion" is one of those very general, amorphous terms that appellate courts use and apply with great frequency but which they have defined in many different ways. It has been said to occur "where no reasonable person would take the view adopted by the [trial] court,"...or when the court acts "without reference to any guiding rules or principles."...It has also been said to exist when the ruling under consideration "appears to have been made on untenable grounds,"...when the ruling is "clearly against the logic and effect of facts and inferences before the court,"...when the ruling is "clearly untenable, unfairly depriving a litigant of a substantial right and denying a just result,"...when the ruling is "violative of fact and logic,"...or when it constitutes an “untenable judicial act that defies reason and works an injustice."...

There is a certain commonality in all of these definitions, to the extent that they express the notion that a ruling reviewed under an abuse of discretion standard will not be reversed simply because the appellate court would not have made the same ruling. The decision under consideration has to be well removed from any center mark imagined by the reviewing court and beyond the fringe of what that court deems minimally acceptable.

In other words, the "abuse of discretion" standard of review is exceedingly forgiving. Imagine that the Court of Special Appeals really did intend to limit the reopened PCR proceeding to the narrow issue of Asia/ineffective assistance in its remand order. Under the abuse of discretion standard of review, that's not going to be dispositive. Instead, the Court of Special Appeals will only find that Judge Welch exceeded the scope of the remand order if it finds that his decision to consider the ineffective assistance/cell tower claim was untenable and based upon an interpretation of the remand order that no reasonable person would make.

The State added emphasis to the end of this sentence but clipped the start of it. Here's the full sentence from the remand order:

That's right. The sentence that the State identifies as maybe the most important sentence in the remand order limiting Judge Welch's discretion doesn't really say what the State claims it says. The State wants this sentence to mean that Judge Welch could only allow the defense to present "relevant documents and even testimony pertinent to the issues raised by this appeal." But the full sentence makes clear that the remand is broader and that there are "other things" the parties should be able to do on appeal.

That language seems pretty broad, and it seems to give Judge Welch the authority to do whatever he wants. Now, while the State didn't address this language in its brief, I imagine that its response would still be that this disposition was limited by COSA's preceding analysis, which was focused on the Asia/ineffective assistance claim.

My response would be that COSA very easily could have used limiting language in its disposition or other part of its remand order indicating that Judge Welch's options were: (1) denying the motion to reopen on the Asia/ineffective assistance issue; or (2) granting the motion to reopen, reopening the PCR proceeding, and affirming or reversing his prior conclusion on the Asia/ineffective assistance issue. Instead, COSA used language indicating that the Circuit Court could "conduct any further proceedings it deems appropriate" and take "any action it deems appropriate."

Am I right? I don't know. But unless my conclusion and the conclusion by Judge Welch is one that no reasonable person could reach, COSA shouldn't find abuse of discretion.

*The State has not claimed that the Circuit Court abused its discretion in reopening the PCR proceeding to reconsider the Asia alibi/ineffective assistance claim.

**And the Court of Appeals has subsequently cited this definition with approval. See, e.g., Alexis v. State.

Doesn't this have to devolve down to either waiver or the merits of the claim, anyway?

To finally resolve this claim against Adnan, COSA needs to either overrule Adnan on the merits and/or rule that Adnan cannot under any circumstances raise this claim.

A ruling that this claim has merit and was not waived, but that Welch abused his discretion by hearing it would just beget a request from CJB to COSA to review this evidence, no?