Is Adnan's Cell Tower Claim Related to His Asia Claim Based on a Prejudice Analysis?

As I noted in a post last Wednesday, there's a good argument that the State's waiver argument in the Adnan Syed case is a non-starter. If that's true, the only possible procedural ground for overruling Judge Welch's order granting a new trial would be a finding that Judge Welch exceeded the authority granted to him by the Court of Special Appeals (COSA) in its remand order by allowing Adnan to supplement his Asia/ineffective assistance claim with the cell tower/ineffective assistance claim. In the next few posts, I will take a look at that argument.

In its remand order, COSA stated that "[t]his remand, among other things, will afford the parties the opportunity to supplement the record with relevant documents and even testimony pertinent to the issues raised by this appeal." Therefore, there is no question that Judge Welch had the authority to hear evidence that is pertinent to the Asia/ineffective assistance claim.

One of the arguments that Justin Brown made in his SUPPLEMENT TO MOTION TO RE-OPEN POST-CONVICTION PROCEEDINGS was that: 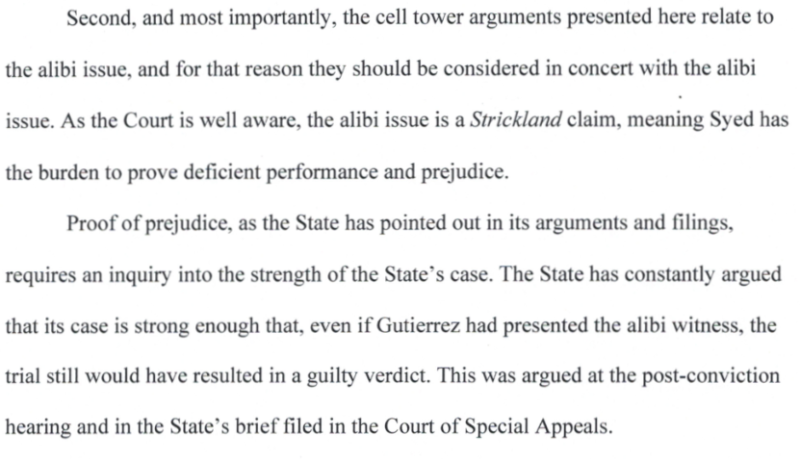 In its CONSOLIDATED RESPONSE IN OPPOSITION TO PETITIONER’S MOTION AND SUPPLEMENT TO REOPEN POST-CONVICTION PROCEEDINGS, the State responded as follows:

Judge Welch's opinion granting Adnan a new trial bears out Justin Brown's argument and refutes the State's argument. After Judge Welch found that it was unreasonable for Cristina Gutierrez not to contact Asia McClain, he proceeded to do a prejudice analysis. And, in that prejudice analysis, Judge Welch concluded "that trial counsel's failure to investigate McClain's alibi did not prejudice the defense because the crux of the State's case did not rest on the time of the murder." Specifically, Judge Welch concluded that

In other words, it turned out that Justin Brown's cell tower claim was pertinent to the Asia/ineffective assistance claim and that the two issues were related, at least in a certain sense. Understandably, the State doesn't make its prejudice argument again in its recent Brief of Appellant. Instead, the State just makes the conclusory statement that Judge Welch entertained "an untimely, unrelated claim during reopened proceedings...."

On the other hand, I fully expect Justin Brown to re-raise the prejudice issue in his brief. And then, we'll just have to see whether the State addresses this issue in its response. This isn't the only ground upon which COSA can find that Judge Welch had the authority to hear the ineffective assistance/cell tower claim, but it seems like a reasonably strong ground without a great counterargument that the State could seemingly make.

Could you expand on your assertion that the Asia/IAC issue is related to the cell disclaimer/IAC. They may be, but it's not obvious to me that they are. When you say " ... the two issues were related, at least in a certain sense", it's not clear how you are drawing that conclusion. Particularly with the modifier "at least in a certain sense" added.

The other part of it, which I will discuss later, is that the State tried to argue against prejudice based on failure to contact Asia by claiming that it could have shifted the “come and get me” call from the 2:36 P.M. call to the 3:15 P.M. call. This was a new argument that was not previously raised at trial or on appeal. Arguably, this opened the door for the defense to raise the ineffective assistance/cell tower claim because the 3:15 P.M. call was an incoming call, making its ping relevant.

To me, the two claims are related because Jay.

Jay was the case against Adnan for all practical intents. If one believes Jay, there can be no reasonable doubt as to Adnan's guilt, if one solid believes Jay then there is no case that Adnan was guilty. It all turns on Jay.

Asia's story would cast doubt on Jay's credibility. The sequence of events Jay recounted does not fit with the cell records and with Asia.

Both of CG's errors ended up making the state's key witness look better.