After a few posts on procedural matters in connection with the State's appeal in the Adnan Syed case, this post takes me back to the substance of the State's appeal This is the post where I lay out the precedent that I think will lead the Court of Special Appeals to affirm Judge Welch's order granting Adnan a new trial.

In finding ineffective assistance based on trial counsel's failure to use the AT&T disclaimer to cross-examine the State's cell tower expert, Judge Welch cited four cases:

So, what did the State have to say about these cases in its Application for Leave to Appeal (ALA) and Brief of Appellant?

Let's start with Driscoll. This is the federal case in which the Eighth Circuit found ineffective assistance because trial counsel failed to cross-examine the State's expert witness with a laboratory report that contradicted the State's theory that an additional blood type "masked" the victim's "O" blood on the alleged murder weapon. According to Judge Welch,* 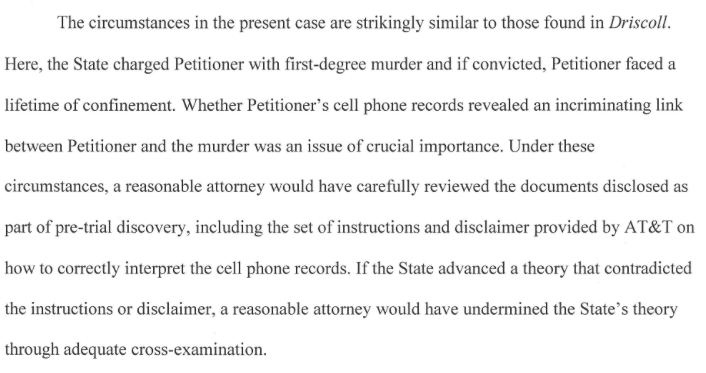 In other words, this is the case that Judge Welch found most factually significant in concluding that Adnan's trial counsel was ineffective. Therefore, it's the case that the State would most want to distinguish on a factual basis.

But it didn't. In its ALA, the State noted Bowers and "the two out-of-state cases cited by the post-conviction court in support of the same proposition": Lee and Trait. The ALA, however, doesn't even mention Driscoll, nor does the State's Brief of Appellant. As it stands, then, the State has done nothing to distinguish the most factually significant opinion supporting Judge Welch's decision to grant Adnan a new trial.

Now, as noted, in its ALA, the State did reference Bowers, Lee, and Trait. According to the ALA,

The single Maryland case cited by the post-conviction court for the proposition that "the failure to conduct an adequate cross-examination may be grounds for finding deficient performance," Bowers v. State, 320 Md. 416 (1990),... does not, in fact, support the court’s conclusion. Rather, the Court of Appeals in Bowers found as "an alternative ground" for its decision to reverse the post-conviction court’s denial of the petitioner’s request for relief that "the cumulative effect of numerous errors" on the part of trial counsel deprived the petitioner of effective assistance of counsel....

The ALA then cited Lee and Trait and correctly noted that both found ineffective assistance based upon multiple errors by trial counsel.

But let's go back to its discussion of Bowers, the most legally significant case for Judge Welch's opinion, given that it was decided by Maryland's highest court. In Bowers, Marselle Bowers was convicted of murder. After he was convicted, Bowers appealed, claiming that he received the ineffective assistance of counsel. The Court of Appeals of Maryland agreed, finding that trial counsel failed to properly cross-examine (1) the State's chemist about incompatible hair evidence ("On cross-examination, Reddick [unsuccessfully] tried to ask the chemist about those hairs."); and (2) a Ramada Inn Manager about a possible alternate suspect ("Reddick asked her no questions about the second man-for example, whether he was black, or whether he was introduced as Peterson-so there was nothing specific that the defense could argue in an effort to suggest that man was Peterson.").

According to the Court of Appeals of Maryland,

The failure to put in the Negroid hair evidence, combined with the failure to examine Ms. Hood, the Ramada Inn Manager, as to, at a minimum, the race of Bowers's companion at that hostelry, violated at least two duties of counsel specifically listed in Strickland: the "duty to bring to bear such skill and knowledge as will render the trial a reliable adversarial testing process" and the "overarching duty to advocate the defendant's cause."...Having undertaken an independent constitutional appraisal based on the entire record, we have no doubt that Reddick's representation of Bowers was not reasonably competent under "prevailing professional norms."

So, based solely on trial counsel's failure to properly cross-examine these prosecution witnesses, Maryland's highest court had "no doubt" that there was ineffective assistance of counsel.

This takes us back to the State's ALA. The State correctly noted that the Court of Appeals of Maryland in Bowers found that trial counsel's cumulative errors were "an alternative ground" for its decision to reverse. But, to the extent that the State is arguing that the court's decision in Bowers was "premised on 'the cumulative effect' of multiple individual errors by counsel," the argument falls flat.

Why? It comes down to a concept I teach students on the first day of law school: obiter dictum.* As the Court of Special Appeals or Maryland noted last year in another case with the name Bowers v. State, 133 A.3d 1254 (Md.App. 2016), "'Obiter dictum' is typically a judicial comment 'that is unnecessary to the decision in the case and therefore not precedential (although it may be considered persuasive).' Black's Law Dictionary 1240 (10th ed.2014)."

The Bowers case cited by Judge Welch contains a textbook example of obiter dictum. After finding that there was "no doubt" that trial counsel's failure on cross-examination was ineffective assistance, the Court of Appeals proceeded to note that

Because of what we have just held, it is not essential that we review any of Bowers's other contentions. Nevertheless we shall do so because an alternative ground for our holding is that the cumulative effect of numerous errors on the part of Reddick also deprived Bowers of the effective assistance of counsel.

In its ALA, the State cited to the second sentence of this transition paragraph while omitting the first, which is what identifies what follows as obiter dictum. This is essential because it means that the Court's conclusions about "the cumulative effect of numerous errors" were unnecessary to its decision in Bowers. As such, Judge Welch correctly cited it as a case in which Maryland's highest court found ineffective assistance based solely on trial counsel's failure on cross-examination.

This makes Bowers very much in line with Elmore v. Ozmint, 661 F.3d 783 (4th Cir. 2011) (which I wrote about here), the case in which the Fourth Circuit found that trial counsel was also ineffective based upon failure to cross-examine an expert witness with inconsistent hair evidence. And yet, while the State at least cited but didn't distinguish Bowers in its ALA, it didn't even mention it in its Brief of Appellant.

So, where does that leave us? First, the State hasn't even mentioned Driscoll, the "strikingly similar" case out of the Eighth Circuit, which seems like pretty strong persuasive precedent. Second, the State has made no attempt to distinguish Bowers, which is strong controlling precedent. Third, Bowers is largely backed up by the Elmore case, which is somewhere between persuasive and controlling precedent, given that it was decided by the Fourth Circuit, the federal judicial circuit that covers Maryland.

Instead, the State has place heavy reliance on Maryland. v. Kulbicki, where a claim of ineffective assistance was rejected based on a finding that trial counsel was not obligated to seek out a possibly unattainable report that actually concluded that Comparative Bullet Lead Analysis "was a valid and useful forensic tool to match suspect to victim."

That's a far cry from the AT&T disclaimer, which specifically said that "[a]ny incoming calls will NOT be considered reliable information for location." Of course, the State has claimed that Judge Welch incorrectly concluded that the disclaimer applied or could have applied to the Leakin Park pings. But, as I've noted any of these factual findings by Judge Welch must be found to be "clearly erroneous" to be reversed, and

**This term is often shortened to dictum or the plural dictum.

Interesting - in Canada we call it "obiter dicta". It's generally shortened to "dicta" but sometimes to "obiter".

I am shocked, shocked the State would cherry pick a quote out of context with a case.

Am I right in thinking that if COSA either upholds Judge Welch on the cell phone issue or reverses him on the failure to contact Asia not being prejudicial, cumulative error might be an alternative ground for their holding as well?

Sounds like you think Adnan is going to win at COSA

Jacob: I think dicta and dictum are pretty interchangeable. Technically, dicta is the plural of dictum, but plenty of judges will refer to a single holding as dicta.

BK: Here, the context makes all the difference.

pluscachange: Yes, if COSA finds inadequate performance on both issues, it could grant a new trial based on cumulative prejudice.

ben: Yes, I think he has a very good chance of winning at least one of his three IAC claims (Asia or cell tower, not plea bargain).

Colin, when you say very good chance, what % chance do you think?
Regards

Ben: I can't quantify it at the moment. I need to see the upcoming briefs, which three judge panel is assigned, and what happens during oral arguments.

Not that it matters at this point, but go take a look at p.40 of Judge Welch’s order and see the section of Bowers he actually cites to – pp.436-37. Naturally, that is the section the State responded to. And in that section, an ineffective cross was just one of several errors, the cumulative effect of which created an alternate basis for a finding of deficient performance.

But, you say, in the first half of the opinion, the court found IAC based solely on two cross-examination failures. Not so. Trial counsel did not, as you claim “fail[] to properly cross-examine the State’s chemist about incompatible hair evidence.” Trial counsel attempted to cross examine that witness about the exculpatory Negroid hair evidence, but it was disallowed, because that was outside the scope of the State’s direct examination. The ASA him/herself told defense counsel to just call the expert as a defense witness. Defense counsel asked the court to keep the witness around for that purpose. That request was granted. Then the defense never called the expert back to the stand. Bowers, at its core, was about a defense attorney’s failure to put on exculpatory evidence. To bolster its holding, the court did find that the defense attorney should have crossed another witness about the hair of the defendant’s accomplice, to draw out the fact that he was black and therefore could have left the hair in question. But that was hardly the main thrust of the court’s deficient performance findind. At the very least, the first half of Bowers is just like the second half, as it was characterized by the State: it involved a flawed cross examination that did not, by itself, amount to a finding of deficient performance. Counsel’s performance was only deemed deficient when the flawed cross was combined with another or other more serious error(s).