According to the State's Brief of Appellant in the Adnan Syed case:

This is probably the most facially compelling argument in the State's brief. It is well established that appellate courts will find ineffective assistance based upon omissions and not based upon choices, assuming that those choices involve some modicum of strategy. Judge Welch found that Cristina Gutierrez's failure to use the AT&T disclaimer to cross-examine the State's cell tower expert was an omission warranting a new trial.

Conversely, in its brief, the State tries to recharacterize Gutierrez's decision as a choice based upon strategy. The AT&T disclaimer, of course, stated that

The State's contention, then, is that Gutierrez's strategy was to attack the reliability of all pings and that use of the AT&T disclaimer would have tended to confirm the reliability of incoming pings. But there's a huge problem with this argument.

As first reported in the Route Talk episode of Serial, the prosecution only used calls that pinged four cell towers as evidence of the location of Adnan's cell phone on January 13, 1999 "[b]ecause the rest of them, didn’t really help their argument." As the testimony of the State's cell tower expert makes clear, these were the calls that pinged towers (1) L654C; (2) L689B; (3) L655A; and (4) L608C: 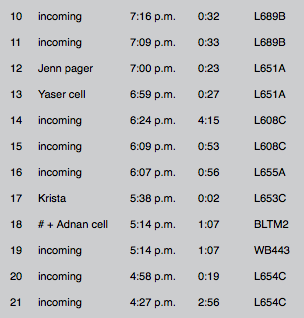 On the other hand, the State claimed that the incoming pings corroborated Jay's stories about (1) where he went after he dropped off Adnan at track practice; (2) where Adnan and he went after track practice; and, most importantly (3) the burial in Leakin Park in the 7:00 hour. It was those pings that the State defense wanted to attack, and the AT&T disclaimer was clearly the best way to attack them. And, more importantly, to the extent that the disclaimer would have tended to establish the reliability of outgoing pings for determining location, this fact would have helped and not hurt the defense.

It was those pings that the State wanted to attack,

I love the elegance of this argument. Thanks Prof.

Colin
Are you ever concerned that the state reads your blog and obtains information they can use in their claims? If I was them, I would be devouring everything you write.

NavyMom: Not really. If anything I wrote has any merit, the defense will probably include it in their brief, so the State would see it anyway.

"Q Now, if there were testimony that someone were in a car traveling westbound on Edmondson Ave and that two calls were made on an AT&T Wireless subscriber phone and you found cell records that had first 653A then a moment, minute or two later a call originating 653C, would that functioning of the network be consistent with the testimony?

The Court: You may answer as only it relates to an Erickson piece of equipment cell phone.

Mr Waranowitz Yes that would be consistent."

Nine9fifty50: A few thoughts: (1) As far as I can tell, AW never did test calls for these calls. Here’s the Disclosure discussing his testing: https://undisclosed.wikispaces.com/file/view/Undis_E08_Amended_State_s_Disclosure9_Oct_1999_Drive_Test_Results.pdf/566641469/Undis_E08_Amended_State_s_Disclosure9_Oct_1999_Drive_Test_Results.pdf. The testing at Route 40 at Cook’s Lane was for the 3:21 P.M. call (and did not match Jay’s testimony regarding location. Therefore, I think Serial was accurate in saying that that testimony regarding test calls for only 4/14 towers was introduced; (2) As a result, there doesn’t seem to be any basis for AW’s testimony, which could be further IAC by CG; (3) Unlike in the examples I provided, AW wasn’t asked about these specific calls – the calls on lines 8 and 9; and (4) This is likely because there wasn’t a specific location for these calls to test. Indeed, at trial #1, Jay testified that they actually happened at the mall. This is in contrast to the calls in connection with the 4 towers mentioned in this post.

The above quote is Urick questioning AW, during direct on day 9 of the trial (2/8/00), about the calls at 8:04 pm and 8:05 pm, after having Jay testify about those specific calls on day 8 of the trial (2/4/00). This shows that the prosecution did use the time and location for outgoing calls to corroborate an element of Jay's story and to call into question Adnan's mosque alibi. Adnan's father testified he and Adnan drove together to the mosque for prayers at 7:30 pm. Adnan's father testified he did not have enough days to take off work, so he did not spend the night at the mosque, and instead broke fast at home that year (contradicting Adnan's explanation on the Serial podcast that he brought food to his father at the mosque). The outgoing calls were made on Adnan's cell at 8:04 pm and 8:05 pm, from a location inconsistent with being at home or at the mosque, but consistent with Jay's description at trial. Jay says he made these calls while he and Adnan were driving to the mall after which Adnan drives Jay home. Then there is a call made by Adnan at 9:00 pm to Nisha followed by calls to Krista, and other calls until 10:30 pm. The timing and location of the 8:04 pm and 8:05 pm calls seems to have been used by the prosecution to directly challenge Adnan's 7:30 pm alibi.

Nine9fifty50: Right, but my point was that there was no basis for AW to give that testimony. As SK noted on Episode 5 of Serial (and as AW noted at trial), AW went to 14 of the most important spots in Jay’s story and made test calls to determine whether they pinged the same tower as the tower listed in Adnan’s call log. Here is the list of test calls that AW made:

That’s why I said in my prior comment that this is more evidence of IAC by CG. What it’s not is evidence that the State used outgoing pings to determine location.