Today, the State filed its Brief of Appellant in the Adnan Syed case. As I noted in my post last Wednesday, my biggest question was whether the State would cite to any cases other than Maryland. v. Kulbicki on the issue of whether Cristina Gutierrez was ineffective in failing to use the AT&T disclaimer to cross-examine the State's cell tower expert. In this post, I will discuss one of the two cases that the State cited.

That case is United States v. Berkowitz, 927 F.2d 1376 (7th Cir. 1991). Berkowitz is a case out of the Seventh Circuit, which covers Illinois, Indiana, and Wisconsin. As a result, Berkowitz is persuasive precedent, which the Court of Special Appeals of Maryland could apply or ignore.

In Berkowitz, Marvin Berkowitz was convicted of obstruction of justice and stealing government property. After he was convicted, he appealed, claiming that he received the ineffective assistance of counsel. At trial, the prosecution's contention was that Berkowitz stole a number of files from a United States Attorney's Office in Chicago. At trial, however, Berkowitz

testified that a number of the documents found at the time of his arrest were his own, not the government's, thus casting (or attempting to cast) doubt on the government's contention about how many documents he took.

This defense, however, was unsuccessful, and, on appeal, Berkowitz claimed that this was because his trial counsel, William Huyck was ineffective based upon failure to properly examine the documents before trial. The Seventh Circuit pretty easily turned this argument aside, concluding that

The only evidence Berkowitz cites concerning Huyck's preparation is a statement in a new trial motion, prepared by Huyck, that he did not seek copies of the records the government had seized. But the motion states only that Huyck did not ask for copies; it does not state that Huyck did not inspect the government exhibits. Furthermore, there are indications in the record that Huyck spent considerable time reviewing records and preparing for trial.

In the State's brief in the Adnan Syed case, the State cites this last line in support of its claim that Cristina Gutierrez rendered effective assistance of counsel with regard to the cell tower evidence: 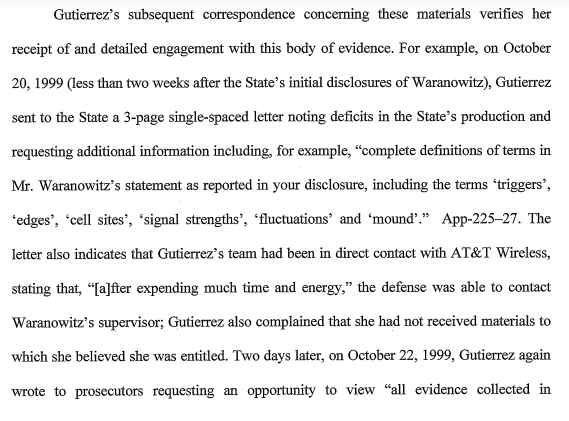 The problem with this line of argument is that it is based on assumptions. Gutierrez was "noting deficits in the State's production..." Gutierrez "complained that she had not received materials..." "Gutierrez had an opportunity to view the State's files."

But did she actually review the key cell tower evidence and exhibits? Luckily for the defense, we have a clear answer to this question. And that's because it was the basis for the mistrial being declared at Adnan's first trial. I did a whole post on this back in October 2015. 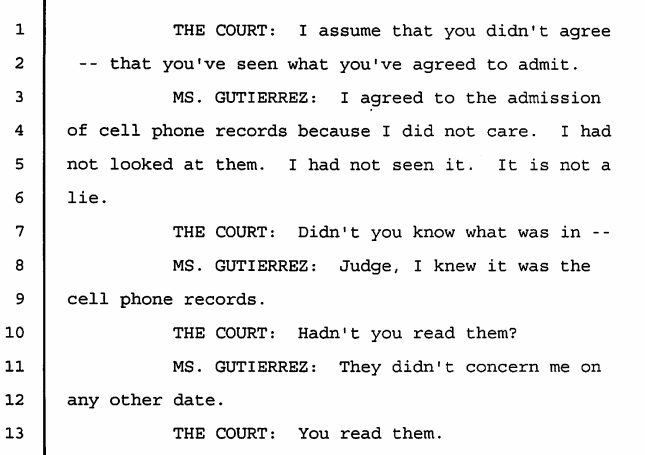 Notably, this exchange took place in December 1999, after all of the events cited by the State. And this exchange clearly reveals that Gutierrez hadn't even bothered to look at the cell phone records in the case. Now, as Gutierrez noted, it's possible that other members of her team looked at the records, which might explain some of the writings referenced by the State. But Gutierrez herself never read them.

Can the state just argue that the judge was right, she was lying?

If she openly admits to disregarding evidence, isn't that proof enough that she was ineffective in her defense? Enough to replace counsel, which she did anyway

I never understood that colloquy that led to the mistrial. I gather that it was about some sort of stipulation about admissibility of evidence, but I never understood the context or rationality of Guttierez' statements. Also, this gets complicated by the apparent way the xeroxes were prepared that disguised important details of the document, including the disclaimer. The truly shocking thing to the layperson (me) however is that the appeals court has to consider the song and dance about whether or not Guttierez say or read the disclaimer. The cell phone evidence should have been inadmissible on the face of it if the disclaimer were known. Frankly, this case, and others, has offered terribly sobering insights into a system corrupt at its foundations; nationally, not only in Baltimore. Factual evidence of misconduct and innocence should matter at some stage for the prosecution in both practice and theory. If not, there is no civil society, no limits respected through common consent, only gangs increasingly armed with automatic weapons. I grew up in the Ozarks, which never truly recovered from the internecine guerrilla warfare, assassinations, etc., of the Civil War. Society is truly very fragile; and when society becomes convinced that legal justice is literally impossible, then this system could easily dissolve in blood/violence. But I've strayed too far already from Adnan's, and truth's, plight.

But this was the first trial, not the trial that Adnan was convicted in !
So Christina said she hadn't looked at the cell records at a PREVIOUS trial......

But isn't the point that even if she did review the records that key information was withheld in the form of the fax cover sheet and therefore she couldn't have known that location data is not reliable when reviewing the incoming calls?

Rose: Judge Welch found that she did ignore Asia and the fax disclaimer. We’ll see if the Court of Special Appeals agrees.

Hal: Gutierrez said that she stipulated to the admission of the cell tower exhibit without reading the exhibit because she didn’t care to look at it; it just didn’t interest her.

Kali: Judge Welch found that Gutierrez had the AT&T disclaimer and should have understood its importance. I don’t know that I agree with that conclusion, but it’s the conclusion that now applies in the case.

Alex: The State will address that issue in its brief responding to Justin's brief.