-Statistics on the percentage of cases in which the Court of Special Appeals (COSA) granted Applications for Leave to Appeal (ALAs) (0-5% annually);

Today, various Maryland State's Attorneys filed an amici curiae brief in support of the State's Application for Leave to Appeal. So, what did they cite in their brief?

Nothing. No statistics. No practice manuals. No law review articles. No court opinions. No rules to explain how COSA should treat the State's § 7-109 application.

Of course, the problem with this argument is that it bolsters Adnan's claim that trial counsel's failure to use the AT&T disclaimer was prejudicial and requires a new trial. And that's because the other evidence cited in the brief isn't nearly as strong as the State's Attorneys claim it to be. For instance, according to the brief, another part of this "crushing" evidence was that, among the witnesses who place Adnan and Jay together on January 13th,

What the State's Attorneys ostensibly don't realize is that this "fact" very much hurts the State's case. Jenn said that she saw Adnan when he dropped Jay off at the parking lot of the night of January 13th, followed by Jay disposing of the items used in the burial. Jay, meanwhile says that Adnan dropped him off at his house without Jenn present, with Jay not disposing of the items used in the burial until the next day. That's a huge contradiction and unlikely to be one that was innocently made.

This, of course, was Judge Welch's point in saying that the Leakin Park pings were the crux of the State's case: It was the only part of Jay's story that was corroborated rather than contradicted.

The brief's second argument is that Judge Welch "twist[ed] procedural rules" and "misappl[ied] substantive" law, impliedly due to Serial and its aftermath. According to the brief, 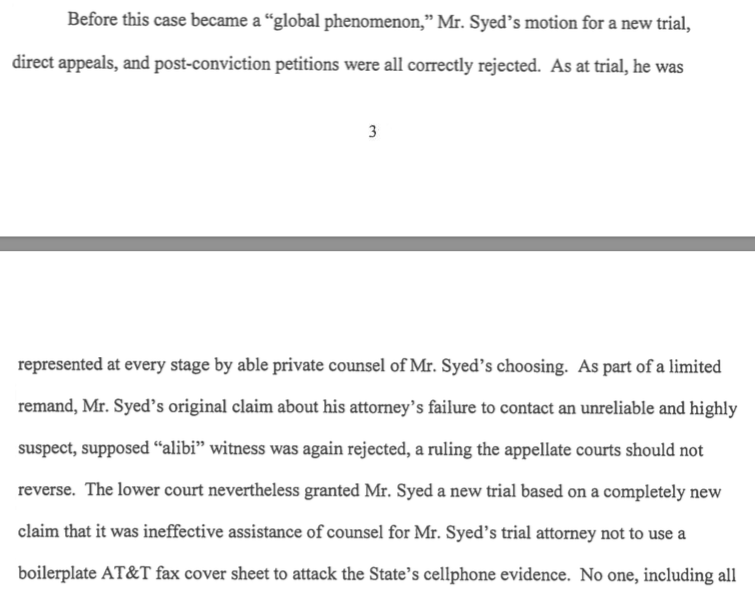 First, this is factually incorrect. Adnan was represented by a public defender at sentencing. Second, it seems disingenuous to imply that Judge Welch was swayed by Serial when he said in his opinion that he never listened to it. Third, the State's Attorney seem to ignore that something huge has changed between Adnan's prior appeals and his current appeal: An alibi witness has said that she was dissuaded from testifying by one of their brethren, which is the reason that Adnan's postconviction proceeding was reopened.

The State's Attorneys, however, claim that

This, however, is a straw man. The NACDL brief did not claim that it was unusual for the State to file an ALA; it claimed that it was unusual for COSA to grant such an ALA. And it supported that claim with statistics. Conversely, the brief by the State's Attorneys cites no statistics nor any precedent. It's yet another example of the defense in this case pounding the law and the State pounding the table.

1.) What do you make of their argument/statement regarding coversheet having not been attacked for 10 years until SS blogged about it? Are they trying to infer irrelevancy?

2.) Is their claim true that no one since has attacked cell phone records on those grounds?

3.) What is the relevancy of that given IAC requires us to look at the facts at the time of the case, and not with the benefit of hindsight?

This brief isn't that striking in terms of argument.

This brief, or at the least the first draft of, was clearly written by Thiru and is nothing more than a PR spin. Thiru continues to spout the claim that the defense is appealing to the court of public opinion but in fact it is he who has being doing everything he can to do that rather than and keep this case out of a trial court.

Colin, do Maryland State attorneys typically file Amicus Briefs in cases of this nature? It seems shameful to be weighing in against a ruling by a judge charged to resolve a matter “in the interests of justice.” But, maybe they always do that.

Darth: (1) They’re trying to make a waiver argument, but the State of Maryland itself has cited the Curtis case for the opposite conclusion several times. (2) No. The Bulos Zumot case is one example where this same issue was raised. (3) As noted, it’s wrong. If not, the State still has failed to establish that there are other cases where this disclaimer existed and was not used.

Jeff P: I don’t know who wrote it, but it’s ringing the same bell.

HS Mock Trial Coaches: It’s exceedingly rare, but it’s also rare for there to be a defense amici. As a result, I don’t have an objection to the idea of the State’s Attorneys filing an amici brief. But I object to the fact that brief doesn’t cite any law, which makes it sound and fury.

So what is the endpoint of the back and forth briefs between the state and defense? By this, I mean when will both parties rest and how long after that will COSA render its decision regarding the ALA?

Colin: How much "impact" do you think this would have on the ruling? Does it strongly affect how the decision is made? Like, how much does this document weigh?

It sounds like it was written by either Thiru Vignarajah, or Seamus Duncan. Ex-trial atty also has that same flavor of being-correct-while-stating-utter-absurdities.