Today, Justin Brown filed two responses in the Adnan Syed case: (1) a response to the State's Application for Leave to Appeal; and (2) a response to the State's Conditional Application for Limited Remand. The first response asks the Court of Special Appeals of Maryland to deny the State leave to appeal Judge Welch's order granting Adnan a new trial based upon trial counsel's failure to cross-examine the State's cell tower expert with the AT&T disclaimer. The second response, which I will address in this post, asks the Court of Special Appeals to refrain from remanding the appeal back to Judge Welch so that he can receive testimony from two sisters, who allege that Asia McClain told them she would make up an alibi for Adnan.

The response to the State's Conditional Application for limited remand makes the following arguments:

The State is contradicting itself

When the defense asked for a remand last year so that Asia McClain could testify as an alibi witness, the State fought the remand tooth and nail despite the fact that the defense "had a good faith reason to believe that prosecutorial misconduct had prevented McClain from testifying in 2010 at Syed’s hearing on his petition for postconviction relief." Conversely, the State has proffered no reason why justice requires a second remand when the State already had the chance to call the sisters, who would merely be impeachment witness whose testimony is better left for a retrial.

The sisters couldn't have factored into trial counsel's decision-making process

There is no evidence that Adnan's trial counsel was aware of these sisters back in 1999/2000, so their claims could have played no role in her failure to contact Asia McClain at the time of trial. Therefore, "[n]othing in the State’s Conditional Application impacts the Circuit Court’s deficiency analysis." Moreover, "with respect to the question of prejudice, even if this “new” evidence might have had some bearing on prejudice, it was never presented to the trial court." I would also add that these sisters themselves indicated that they didn't know about Asia's level of involvement in the case and of course didn't come forward until hearing that Adnan got a new trial; therefore, there's no indication that they would have come forward before Adnan's trials back in 1999/2000.

A new trial is the appropriate remedy

According to the response,

The Circuit Court granted Syed the appropriate remedy: a new trial, with capable counsel. This renders the State’s request for a remand unnecessary. At a new trial, Syed and the State will have the opportunity to present all of their evidence and arguments, including any rebuttal and impeachment witnesses. The State does not dispute this; notably absent from its lengthy brief is any explanation of how a fair trial would prejudice its ability to present its case. In contrast, the limited remand the State proposes is a half-measure that allows the State to offer its belated testimony, while Syed remains in prison based on an unconstitutional, vacated conviction.

The response also makes the point that allowing another remand could create a vicious cycle with no end in sight while Adnan remains incarcerated despite an order granting him a new trial. Brown notes that

The State’s proposed approach has no logical endpoint. Indeed, if the State were now permitted to introduce its proffered testimony, justice would presumably then require that Syed be permitted to introduce testimony from his own new witnesses to rehabilitate McClain’s credibility. And in fact, Syed already has an affidavit from such a witness, who was with McClain around the time she learned of Syed’s arrest.* According to the Affiant, McClain told him about seeing Syed in the library the afternoon when Lee went missing, and discussed with him what she should do with this information....It was the Affiant, in fact, who drove McClain to Syed’s parents’ house to tell them she had seen their son in the library on the day in question....No doubt, if Syed were to propose calling his Affiant as a witness, the State would scour Woodlawn High School graduates until it found someone to testify that the Affiant, too, was lying.

The State had argued that Brown made a new claim by arguing that the Court of Special Appeals should look at the prejudice caused by trial counsel's failure to contact Asia McClain and failure to use the AT&T disclaimer cumulatively as opposed to separately. According to the response,

Syed has not raised a new cumulative error “claim” in which he argues that trial counsel committed numerous errors, which, only collectively, constituted deficient performance. Instead, Syed has simply argued that where, as here, a petitioner asserts multiple deficiencies by counsel, a court should “rule[] on all alleged deficiencies in trial performance and then...the cumulative prejudicial effect of all of the performance deficiencies[.]”

*The affidavit is included at the end of the response, and it notes, inter alia, that 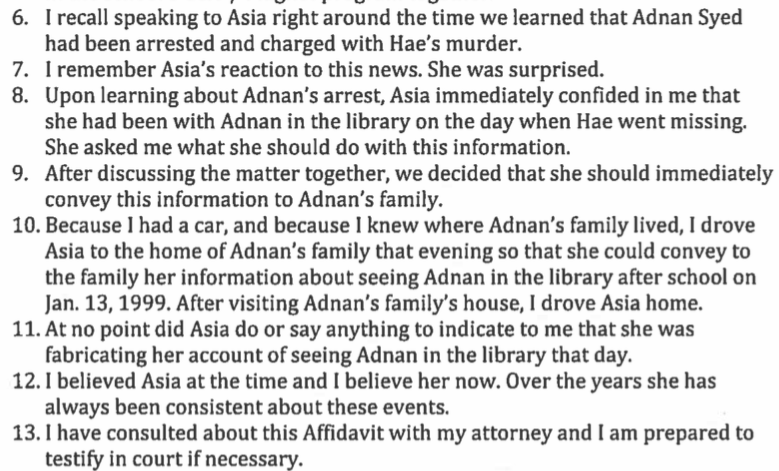 Colin: During this period of briefing, appeal, etc., why isn't or when will Justin seek bail for Adnan? Also, I have a question about the Joey Watkins case that is really puzzling me but I do not have a twitter account. How do I bring that question to your team?

@Colin Would you nod your head once if Justin is holding cards close to his vest in this process? The lack of bail request and his passive (in my opinion) response to the State's motions seem to indicate he's cautious, but confident in his position.

I was hoping for some more footnotes about Urick but I suppose there's a time and a place for that.

As far as I am aware Adnan will not be granted bail as the state has appealed the decision from Judge Welch! Hopefully once COSA throw out the states appeal Justin will be able to file for bail and a re-trial will happen or a plea deal offered

AMF: I’d expect a bail petition in the next month or so. You can send the question about Joey’s case to Mille933@law.sc.edu

tim: I don’t think he needed to be more aggressive given the weakness of the State’s arguments. I do expect him to move for bail in the next month or so.

Jodi: Urick led to the PCR hearing being reopened, but he doesn’t have much relevance beyond that.

Given the recent filing of the amicus brief in support of Adnan's claims that COSA should deny the state leave to appeal - are you able to comment on whether or not they have much impact?

Thanks Professor. I'm intrigued by something in the other brief, but it's a little opaque for us non legal types. Can you please shine some light on the footnote on page 14 "Solberg v. Majerle Management, 388 Md. 281, 295 (2005) (declining to address argument presented only in a footnote" :-D

When will we hear more about Don? Evidence in the police locker?