Here's a pretty interesting story about a 1998 murder in Baltimore.* It involves the trial of "Kenneth D. Perry, 43, who was convicted and sentenced to life without parole in 2001 for killing Kelly Bunn and his former girlfriend, LaShawn Jordan, as Jordan's 4-year-old daughter watched." Well, actually, it involves the trial(s) of Perry.

According to the article,

After Perry exhausted his appeals, his attorney filed requests for post-conviction relief and documents associated with the case.

As prosecutor Lisa Phelps began reviewing the files, she discovered records from interviews with the 4-year-old eyewitness, Jewel Williams, in which the girl described her mother's killer as wearing a mask.

After an exhaustive review of documents, Phelps concluded that [prosecutor Cassandra] Costley, who now works for Forster in the public defender's office, never turned the materials over to the defense.

Prosecutors have declined to comment on who conducted the interviews, how many there were, whether Costley - who tried the case - was present for them, and when they were conducted. Vickie Wash, who is no longer with the office, was co-counsel on the case.

Undisclosed listeners should be familiar with the name Vickie Wash for at least 3 reasons. First, she was the prosecutor who had to apologize to Judge Mitchell after falsely claiming at Adnan's bail hearing that there was "a pattern of young Pakistani students who once jilted by their lovers, murdered them and then fled to Pakistan and were unable to be extradited by the U.S. for prosecution." Second, she and Detective MacGillivary went to Woodlawn High School on March 23-24, 1999 to interview several members of the faculty and staff, including soccer coach Karl Brown: 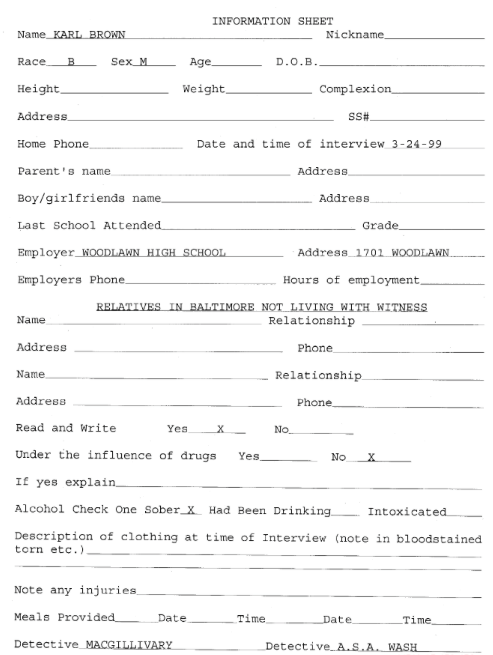 Third, she is currently the Director of the Legal Section of the Baltimore County Police Department, meaning that she is the one responsible for responding to our MPIA requests for information relating to the BCPD investigation of the murder of Hae Min Lee, including the receipt of a CrimeStoppers tip on February 1, 1999.

As for Perry, it appears that the failure to disclose material exculpatory evidence led to him being granted a new trial that occurred in early 2011. An article on that retrial goes into more detail about what was withheld:

As Lisa Phelps...began reviewing the files, she discovered records from interviews with the young eyewitness, in which the girl described her mother's killer as having worn a mask. Phelps concluded that Costley had not turned the transcripts over to the defense, as she was required to do....

During the 2001 trial, Perry's attorney, William Monfried — who has since died — did not ask Jewel about a mask. Phelps, the prosecutor in the retrial, said during an earlier hearing that the bulk of the evidence "was the testimony of young Jewel, and this information could have had an impact on the case had the defense attorney been aware of it."

The result of the retrial, however, was the same: Perry was still convicted of murder. And, in Perry v. State, 56 A.3d 1242 (Md. 2012), his appeal from this subsequent conviction was denied. Unfortunately, the available materials fail to indicate the identity of the people present for the undisclosed interview(s) with Jewel. Maybe we could find this out with a new MPIA request...to Baltimore City.

*Thanks to CreusetController for bringing this to my attention.

Why was Vickie Wash at Woodlawn high school conducting an interview with coach Karl Brown anyway?

Some people have hypothesized that the reason the police were interviewing coach Karl Brown was because someone on the police force was interested in buying a motorcycle. Somehow I can't imagine Vicki Wash from the state prosecutors office conducting an interview in order to help a unnamed police officer score a good deal on a motorcycle.

So why was Vickie Wash, a member of the prosecutors office, talking to Karl Brown? Was she discussing Jay Wild's or discussing a motorcycle purchase or??

If she discussed Jay Wild's during the interview and subsequently withheld the interview from the defense (since this is the only interview that was "lost" by police from that day), is this a potential Brady violation?

Thanks so much for such informative posts.

What is your proposal on how to improve our justice system to where there is the proper oversight? I do not think that the burden can be on the prosecution because the conflict of interest and the temptation is too great toward tipping the scale. By the time the defense knows they are the suspect (s), it is too late for oversight. In addition, few defendants would have the resources to undertake a completely separate and independent investigation of witnesses, experts and documents, yet this is what it has come to. I am just wondering how we can fix a system where all of the evidence, resources and investigative power lie with an entity that governs itself?

I mean, Wash (or another prosecutor, but probably Wash) was present for Becky's statement where she said Hae could not give Adnan a ride, and that was never given to the defense. Nor was the statement from Coach Sye about him thinking Adnan was at track on time and left on time.

So it's not conjecture to think that Wash or another prosecutor heard exculpatory information during witness interviews and then failed to turn that over to the defense, because we already know they did that.

A number of years ago Professor Friedman and I had an argument about the testimony of very young children. In my view children younger than six simply cannot give credible evidence in the court of law. It is not only the case that they cannot understand the proceedings, not only the case that they have difficult telling the difference between truth and lies, but that they are highly suggestible to the implanting of false memories by authority figures (intentional or not).

It seems like the behavioral norms within that DA office was "Brady-shady. Never give the other side even an inch. If you get caught later, give whatever you are forced to, and nothing more. If you are caught again later, rinse and repeat."

Brady-Shmady** I meant to say.

1. Can crime stoppers info be subpoenaed by the defense since it appears that Wash has no intention to voluntarily comply with the FOIA request?

2. Is there a penalty for not voluntarily complying with the FOIA request?

3. Was there any disciplinary action taken against Wash by her employer or by her law licensing authority for openly and blatantly lying to a judge? Isn't this a huge ethical violation? How could she get away with it?!

Is there really no other person at BCPD Legal Section who would be required to take over MPIA requests that relate to a matter that a current Director had been involved in? It's a clear conflict of interest for a former prosecutor to be handling MPIA decisions related to her former cases, especially where there are Brady claims and/or claims of prosecutorial misconduct.

@LawGeek I cannot find any penalty for refusal to comply with an FOIA request. The nuclear option is to file a lawsuit in a district court, but that's expensive and time consuming. I would think repeated lawsuits against a specific agency would draw the gaze of the DOJ, which could penalize as it sees fit.

"So it's not conjecture to think that Wash or another prosecutor heard exculpatory information during witness interviews and then failed to turn that over to the defense, because we already know they did that."

Yes, it is conjecture. It's a plausible theory, but it is still conjecture.

@Darth Shady It's not conjecture if it is factually known. Hence the "because we already know they did that."

@Daniel... Here's an update for you on child testimony: http://widenerlawreview.org/files/2011/03/Raeder.pdf