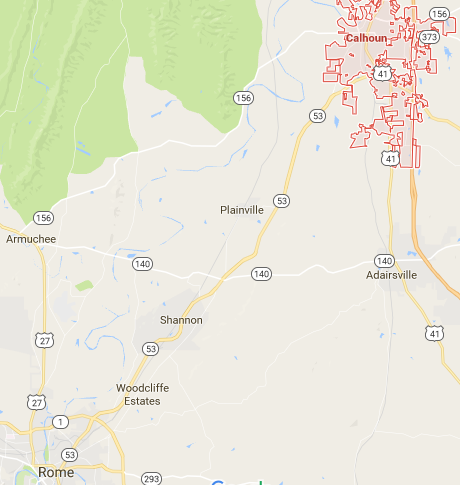 Undisclosed listeners might look at the above map and conclude that it pertains to our second season case. That's because, on January 11, 2000, Isaac Dawkins was driving north from Rome on Route 27 to his family's home in Armuchee when he was fatally shot. But shift your focus to the upper right of the map, and you will see the the city of Calhoun, Georgia, the home of the New Echota Historical site, commemorating the first Cherokee capital. Now, it could also be the site of a revolution in the way the we view bail.

According to an amicus brief filed by the Department of Justice last week,

Maurice Walker is a 54-year old man who was arrested by the Calhoun Police Department for being a pedestrian under the influence and was kept in jail for six nights without making bail....He filed this class action alleging that the City of Calhoun, Georgia, employs an unconstitutional bail practice that imprisons indigent defendants because of their inability to pay fixed bail amounts for misdemeanors, traffic offenses, and ordinance violations....

According to the complaint, Walker has a serious mental health disability and limited income with no assets. He lives with his sister, who manages his only income of $530 per month of Social Security disability benefits....When Walker was arrested on September 3, 2015, he was informed that he would not be released unless he paid the $160 fixed cash bond amount set by the City for the misdemeanor of being a pedestrian under the influence. Georgia law provides that "at no time * * * shall any person charged with a misdemeanor be refused bail."...But Walker alleged that, contrary to state law, the City‟s policy and practice was to immediately release individuals arrested for minor traffic or misdemeanor offenses if they can pay preset bond amounts (which vary by offense), but to hold those who cannot afford the bond in jail until their first court appearance....By contrast, Walker contended that many other cities provide for release of misdemeanor arrestees on recognizance or unsecured bonds. These forms of security involve promises to appear with penalties for failing to appear in court, such as an added criminal charge or a monetary fine....

Walker alleged that because he is indigent, and because he could not afford the fixed bail amount, he was kept in jail for several nights to await his court appearance.

On behalf of himself and those similarly situated, Walker sued the City under 42 U.S.C. 1983, alleging that its bail practice violates the Due Process and Equal Protection Clauses of the Fourteenth Amendment.

Yes, that's right. The Department of Justice filed an amicus brief in support of Walker's argument that Georgia's bail system is unconstitutional. It's main argument is that Georgia's fixed bail schedule violates the Due Process and Equal Protection clauses because

fixed bail schedules that allow for the pretrial release of only those who can pay, without accounting for ability to pay and alternative methods of assuring future appearance, do not provide for...individualized determinations, and therefore unlawfully discriminate based on indigence. Under such bail schemes, arrestees who can afford to pay the fixed bail amount are promptly released whenever they are able to access sufficient funds for payment, even if they are likely to miss their assigned court date or pose a danger to others. Conversely, the use of such schedules effectively denies pretrial release to those who cannot afford to pay the fixed bail amount, even if they pose no flight risk, and even if alternative methods of assuring appearance (such as an unsecured bond or supervised release) could be imposed. Such individuals are unnecessarily kept in jail until their court appearance often for even minor offenses, such as a traffic or ordinance violation, including violations that are not punishable by incarceration.

Thereafter, starting on page 29 of its brief, the DOJ notes some of the public policy concerns with the excessive pretrial detention of citizens. Here are some of the high (low) points:

Bail practices that do not account for indigence result in the unnecessary incarceration of numerous individuals who are presumed innocent....Unnecessary pretrial detention significantly burdens the limited resources of taxpayers and state and local governments. It also creates additional problems as jails become overcrowded.

The repercussions of unnecessary pretrial detention that disproportionately affect indigent individuals can reverberate in other parts of the criminal justice process and impede the fair administration of justice. The “traditional right to freedom before conviction permits the unhampered preparation of a defense, and serves to prevent the infliction of punishment prior to conviction.”...But incarceration could hinder a defendant‟s “ability to gather evidence, contact witnesses, or otherwise prepare his defense.”...Excessive pretrial detention could also induce the innocent to plead guilty for a speedier release or result in a detention period that exceeds the expected sentence. And because “[m]ost jails offer little or no recreational or rehabilitative programs,” pretrial detention is not likely to reduce recidivism. Ibid.

Pretrial incarceration also “often means loss of a job; it disrupts family life; and it enforces idleness.”...This impact may be exacerbated for indigent individuals who, as a consequence of their poverty, are already in vulnerable situations.16

In short, bail practices that fail to account for indigence are not only unconstitutional, but also conflict with sound public policy considerations.

Walker's case is currently before the Eleventh Circuit. It is definitely one to follow.

Colin - is the city really fighting to maintain their practice? It seems like there is much wrong with their current practice and very obvious they should change it. Why wouldn't the mayor and city council just change their practice immediately? If they changed it now does it still continue through the legal process to acknowledge that what was done previously was not constitutional? Or does the legal action stop at that point?

This map made me think of the question I'd like to submit for the Undisclosed podcast. I don't do twitter, and I haven't heard you tell of another way to submit questions, so I'll try here. Could you post a map like this one that shows where the incident happened and where the main people were traveling? I'm a map person, and I'd like to "travel" the road on Google Maps to help picture what happened. Thanks!