I then noted how, pursuant to Jones v. State, 843 A.2d 778 (Md. 2004), even if the Court of Special Appeals of Maryland finds that Adnan waived his cell tower/IAC claim, it could still excuse that waiver and affirm Judge Welch's order granting Adnan a new trial based upon the claim. Notably, something very similar was done in Kulbicki v. State, 99 A.3d 730 (Md. 2014).

Kulbicki is the case in which James Kulbicki ultimately claimed that he received the ineffective assistance of counsel based upon his trial counsel's failure to properly challenge the Comparative Bullet Lead Analysis (CBLA) done in his case. Kulbicki, however,

did not argue that his attorneys were ineffective for failing to challenge the State's CBLA evidence before the Court of Special Appeals and the intermediate appellate court did not address the issue. Ineffective assistance of counsel with respect to the CBLA evidence, moreover, was not addressed in Kulbicki's brief before us; during oral argument, however, after the State argued that the admission of CBLA evidence was not a due process violation because Kulbicki's attorneys should have been able to test the flawed assumptions upon which CBLA was based at trial, questions were raised by the Court regarding ineffectiveness of counsel.

In other words, Kulbicki initially made a Due Process argument and only subsequently made an ineffective assistance of counsel (IAC) claim based upon a new argument made by the State. According to the Court, this meant that it would exercise its authority to hear Kulbicki's IAC claim under Rule 8-131(a):

Now, let's turn to Adnan's appeal. Like Kulbicki, Adnan did not initially claim that his trial counsel was ineffective for failing to properly challenge the cell tower pings. In its appellate brief on the Asia/IAC issue, however, the State raised a new argument that it had never previously made at trial or on appeal. Here's how Justin Brown put it in his Supplement to Motion to Re-Open Post-Conviction Proceedings on behalf of Adnan Syed.: 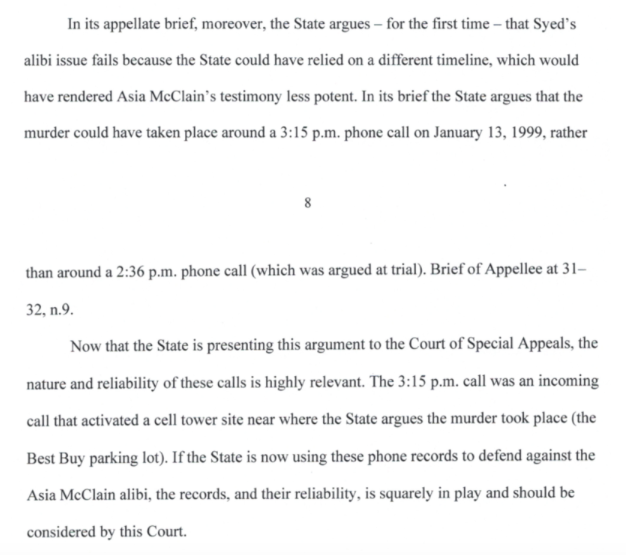 *The opinion of the Court of Appeals of Maryland in Kulbicki, of course, was ultimately reversed by the Supreme Court, but it was reversed on substantive grounds, not on procedural/waiver grounds.

Colin, somewhat off topic, but how does Jay's Intercept interview play into the cell tower pings. I believe Judge Welch even commented on the corroboration between Jay and the 7:00. If Jay was to affirm the after midnight burial, would it render the 7:00 pings completely impotent? If the timeline can't be moved due to the pings, and the only pings that are relevant are the 7:00 pings, doesn't the State's case completely collapse? I am curious is COSA is allowed to consider these factors in its decision?

Tim, COSA absolutely cannot consider any extrajudicial statements in rendering its decision. Its decision must be confined the the record evidence, which includes the evidence adduced at the 2nd trial and at both PCR hearings.

If Jay testified in a retrial that the burial happened closer to midnight, as he did in his interview with the Intercept, it would be a major blow to the State's case for the reasons you suggest. The State might offer a plea if Jay confirms that this is how he would testify at a new trial. The State is permitted to impeach its own witness, however, and could do so with his prior testimony. Whether the jury would believe that Jay had been truthful in 2000 and was lying and/or mistaken now would likely depend on whether the State could convince them that he had reason to do so. Similarly, if Jay were to testify in a retrial consistent with his prior testimony, the defense could impeach him with his Intercept interview and try to convince the jury that he was lying.

Keep in kind, however, that in a retrial, Judge Welch's view of the evidence is irrelevant. The fact that he thinks the 7pm pings are the crux of the case does not mean a jury will view it that way. If a jury believes Jay (again), they will convict. If they disbelieve him and there is no new evidence linking Adnan to the murder, they will likely acquit.

I also have a question about this. Is there a statute of limitations on perjury? What is this guy allowed to admit he lied under oath--while Adnan remains in prison primarily (according to Judge Welch) because of this lie?

Generally perjury is a tool used by the state to inflict punishment on someone for crossing them. I could see a sequence of events which Jay could ultimately be charged in the future--but as for now since his perjury really only screwed over Adnan it's unlikely Jay will be charged with it.

Jane, does COSA take Judge Welch's opinion into account or just his ruling? He made clear what he felt was garbage and what he thought was accurate. Is that part of COSA's decision, or does COSA just make sure Welch followed procedure?

Thanks for the response, Paul. Makes sense.

I think the Kulbicki case was also the only case that Vignarajah cited in the Post hearing, and he misapplied it. In this appeal it undermines his argument. Rather suggests he didn't actually read the opinion before referencing it. And isn't it a frequently cited case, that any experienced MD criminal lawyer should be familiar with. Sloppy. Sloppy like opening the door for Syed to challenge cell-phone reliability with the feeble "we will change the CAGM call time" threat in pre hearing briefs, Sloppy like relying on Officer Mill's to say there were no cameras at the library without bothering to check by, say, interviewing him about it. Sloppy like writing up Fitzgerald's expert opinion before he'd seen any of the evidence. Sloppy like not ensuring Fitz actually studied the evidence before he took the stand. And the list goes on, and on, and on.

If I were his employer I would be seriously worrying about yet another piece of sloppy work in such a high profile case, he is making the MD State's Attorney's office look incompetent as well as mendacious.